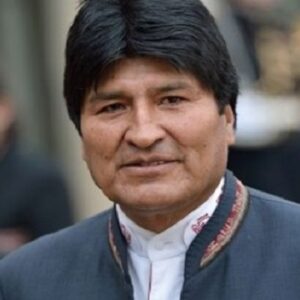 Bolivia’s current President, Evo Morales, has held the position since 2006. Born to impoverished indigenous parents in the remote mountainous part of his nation, young Evo learned the value of work by assisting his family in farming and herding to earn a living. His family relocated to a coca-growing region after a devastating storm. He learned leadership skills while captaining his team and worked equally well as a union organizer. He was an avid sports fan. Evo was persuaded to pursue a political path after leading his fellow coca growers on a series of protests and strikes. He was soon elected to the national congress. Morales won the ultimate contest and was swept into power as the country’s first indigenous president, despite strong opposition from powerful enemies abroad and domestic opposition to his cause. He has led his country on an independent and strongly autonomous path after radically reorienting his government, preferring to spend budgetary windfalls on causes related to social justice over military hardware. Despite numerous clashes with foreign powers, he was able to keep his presidency. Morales is in a strong position to lead his country for the foreseeable future after winning a recent election.

Juan Evo Morales Ayma was born in Isallawi, Bolivia, on October 26, 1959. His parents were both indigenous Aymaras who worked as subsistence farmers in the Orinoca Canton.

Evo’s father, Dionisio Morales Choque, and his mother, Maria Ayma, had seven children, but only Evo, his sister Esther, and his brother Hugo survived childhood.

Soccer was his favorite pastime as a kid. But he didn’t have much time for sports because he was busy planting crops and herding llamas on his family’s farm.

Despite the fact that his family spoke Aymara at home, he picked up Spanish quickly while in elementary school in Argentina. In Bolivia’s Orinoco, he completed his high school education.

Morales enrolled in the ‘Orinoco Agrarian Technical Institute’ in 1974, but dropped out before his final year. His parents sent him to Ororu to study a year later, and he graduated in 1977.

After graduation in 1977, he moved to Chapare Province to begin his mandatory military service. The following year, he began working as a journeyman laborer and bricklayer all over Bolivia. He also made money touring with the ‘Royal Imperial Band’ as a trumpet player.

He moved to Cochabamba with his family in 1979, where he learned to grow local crops, including coca. In the same year, he joined the coca growers’ trade union and was appointed as its ‘Secretary of Sports.’

He was promoted to General Secretary of the union syndicate in his region in 1982. Morales and other coca growers were offered $2,500 by the US government for each acre of coca they eradicated a year later. Morales turned down the offer and began organizing coca growers to oppose it.

On the anniversary of the ‘Villa Tunari Massacre,’ he gave a commemorative speech in 1989. The next day, government agents assaulted him and left him to die in a remote mountain pass.

He was detained by the Bolivian government in 1994 and brutally beaten while incarcerated. Thousands of his supporters marched on the jail the next day, and he was released shortly after.

He was arrested again in 1995, this time on charges of plotting a coup. Several of his alleged co-conspirators were tortured severely while in custody, but no one was charged formally in the case. Morales’ union formed a political party, the ‘Assembly for the Sovereignty of Peoples,’ in the same year (ASP).

Bolivia’s ‘National Election Court’ declared the ASP ineligible to run for office in 1996. After that, the ASP worked out a vote-sharing deal with a group of left-wing parties.

In the 1997 elections, he was elected to the ‘National Congress’ to represent the El Chapare region. The ASP split in 1998 due to factional infighting. Morales split up and formed his own political party, the ‘Movement for Socialism’ (MAS).

Jorge Quiroga was elected President of Bolivia in 2001. Quiroga was pressured by the US government to resign from Congress.

Morales was expelled from Congress in 2002 after 140 deputies voted against him for allegedly using inflammatory language that resulted in the deaths of two police officers in a shootout in his home region.

In the presidential election of late 2005, he defeated Jorge Quiroga. He radically reorganized the government after taking office the following year, increasing taxes on gas extraction and establishing large-scale programs to combat illiteracy, sexism, poverty, and racism.

In 2008, he won a nationwide vote of confidence that he organized himself to gauge public support for him. Bolivia was declared illiteracy-free by UNESCO in 2009.

He was re-elected president of Bolivia the following year. Morales and his presidential entourage were flying when their plane was shot down by Austrian authorities in 2013.

Officials at the Federal Aviation Administration had been informed incorrectly that he was attempting to smuggle Edward Snowden, the famed whistleblower. Bolivian President Evo Morales was re-elected to a third term in 2014.

Since January 22, 2006, he has served as President of Bolivia. The leader is well-known for his policies aimed at eradicating illiteracy and improving the country’s economic conditions. He also expresses his support for environmental causes and indigenous people’s rights.

Morales has never been married and is currently single. He has two children, Alvaro Morales Paredes and Eva Liz Morales Alvarado, from different relationships.

Bolivian politician, activist, and footballer Evo Morales has a net worth of $500,000. Eric Szmanda was born in the Bolivian town of Isallawi in October 1959. He was Bolivia’s 80th President. From 2006 to November 2019, he was President of the United States.

Evo’s placenta was buried in a traditional Aymara ceremony, as is customary.
Morales became the world’s oldest professional soccer player in 2014. He is currently a member of the ‘Sport Boys Warnes’ team.