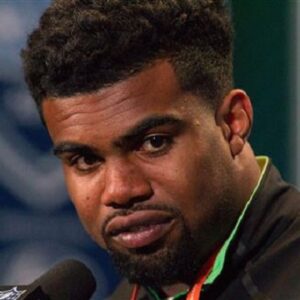 Ezekiel Elliott is a running back for the Dallas Cowboys of the National Football League in the United States. Elliott can be considered one of the top players in the NFL, having earned multiple trophies over his career, including ‘FedEx Ground Player of the Year’ and ‘Offensive Rookie of the Year.’ Elliott was born in St. Louis, Missouri, to parents who were also athletes. His father was a linebacker for the University of Missouri football team. Elliott was a sports fanatic throughout his childhood, participating in a variety of sports including football, baseball, and basketball. He was a member of the Ohio State football team throughout his college years. His outstanding performance earned him All-America accolades on the second team. In the 2016 NFL draft, he was selected by the Dallas Cowboys. He has shown to be a very effective player in the NFL since his debut. He became only the second rookie in Cowboys history to rush for over 1000 yards in a single season. He also became the third running back in NFL history to rush for 1000 yards in only nine games. Elliott, who is tall, well-built, and athletic, is one of the most anticipated upcoming NFL players in the coming years.

Ezekiel Elliott was born on July 22, 1995, into a family of athletes in St. Louis, Missouri, United States. Stacy Elliott, his father, was a linebacker for the University of Missouri football team. Dawn Huff, his mother, was a three-sport state champion in high school. He is the younger of two sisters. His maternal grandfather was a former Drake University basketball player.

Elliott went to Ladue, Missouri’s John Burroughs School. He excelled in a variety of sports, including football, basketball, and track and field. He joined the John Burroughs Bombers football team soon after.

Ezekiel Elliott ran for 1802 yards and 34 touchdowns as a junior in 2012, and caught 23 passes for 401 yards and six touchdowns. He was named offensive player of the year by the St. Louis Post-Dispatch after this outstanding effort.
Elliott, a talented track and field athlete, competed at the state level in sprinting and hurdling events. His personal bests in the 100-meter dash are 10.95 seconds, the 200-meter dash is 22.05 seconds, the 110-meter hurdles is 13.77 seconds, and the 300-meter hurdles is 37.52 seconds. In Missouri, he was named ‘Gatorade Track Athlete of the Year’ for his outstanding exploits.

Despite being pressured to enroll in the University of Missouri, his parents’ old mater, he chose to enroll at Ohio State University. He rushed for 262 yards and two touchdowns on 30 carries as a freshman at the university. He was named to the Academic All-Big Ten Conference squad the following year as a result of his efforts.

He carried for more than 100 yards six times during the 2014 season. During the 2014 Big Ten Championship Game, he rushed for 220 yards and two scores on 20 carries. He was instrumental in Ohio State’s first-ever NCAA football playoff appearance.

Later in the season, he finished the Buckeyes’ championship season by rushing for 246 yards and four touchdowns on 36 touches against the Oregon Ducks. He was also voted the Most Offensive MVP of the game. He concluded his career at Ohio State University with a total of 3,961 running yards, second only to Archie Griffin.

During his time at Ohio State University, he received multiple awards, including the 2015 Sugar Bowl Offensive MVP and the 2015 College Football Playoff National Championship Game Offensive MVP. He was also a strong contender for the Heisman Trophy in 2015. He also earned the Graham-George Offensive Player of the Year award in 2015 and the Ameche-Dayne Running Back of the Year award in 2015. He was also named to the Big Ten’s Unanimous First Team.

Elliott was selected by the Dallas Cowboys in the 2016 NFL Draft. He signed a four-year, $25 million rookie contract with a $16 million signing bonus.

He became the second Cowboys rookie to dash for over 1000 yards in a single season after just nine games in 2016. His entire season performance was outstanding, earning him his first Pro Bowl berth.

Tiffany Thompson, who works in an Ohio nightclub, was Ezekiel Elliott’s ex-girlfriend. They eventually split up because Elliott allegedly mistreated her both physically and mentally.

In 2021, Ezekiel Elliott’s net worth is estimated to be at $23.3 million USD. This is according to a number of credible sources, including the well-known Forbes magazine. As of May 2020, the Illinois native had made $23.3 million. He was taken fourth overall by the Dallas Cowboys in the 2016 NFL Draft after a brilliant collegiate career with the Big Ten football powerhouse Ohio State Buckeyes, which included a national title victory.