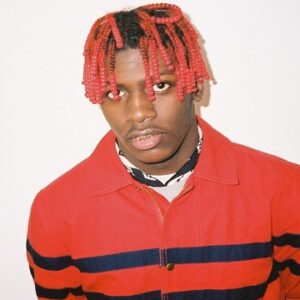 Famous Dex is the stage name of Dexter Gore Jr., a well-known rapper and composer. He is well-known for his pop-rap, drill, and trap-rap music. Dex is one of the most innovative rappers of the twenty-first century, with music that emphasizes the creative side of young culture rather than violence and criminality. One of his buddies dubbed him Black Migo Dex since he was an African-American Muslim. Famous was the first musician to be signed to rapper Rich the Kid’s record label, “Rich Forever Music.” Dex is currently the CEO of this company, which has formed a collaboration with the 300 entertainment record labels. He’s a popular hip-hop musician from the South whose rhyming style is well-liked and admired by music fans. He and Atlanta rapper Lil Yachty have the same hair color and braiding style. Dex is a multi-talented rap artist whose mixtapes and singles have gone viral on mainstream radio. ‘Swag,’ ‘Hoes Mad,’ and ‘Drip From My Walk’ are some of his most well-known tunes. He’s also a Crazyville gang member (Gangster Disciples set).

Dex got his start as a hype man/dancer in his friend’s music videos, and he quickly rose to prominence. After that, he changed his identity to Famous Dex and began producing hip-hop music.

Famous rose to prominence after remixing Chief Keef’s ‘Kobe’ and rapper Dej Loaf’s ‘Try Me’ in 2013. Then, in 2014, he published his first single, ‘Bottle After Bottle,’ which earned 197,226 views on YouTube.

In 2015, Famous released his mixtape album ‘Never Seen It Coming,’ which featured songs like ‘Your Fault,’ ‘Jealousy,’ and ‘For the Low.’ This mixtape’s song ‘Duh Dummy’ has received a lot of praise.

In 2015, he released another mixtape called “Dexter’s Laboratory,” which garnered him a large fan base. Songs like ‘Who told you I was the man,’ ‘Swagg,’ and ‘Hoes Mad,’ which went viral on YouTube, were among them.

In 2016, Dex followed up with three new remix albums, titled ‘Drippy,’ ‘Ohh Mann Godd Damn 2’, and ‘Heartbreak Kid.’ ‘Whatever,’ ‘I’m Crazy,’ ‘My Gang,’ ‘Hit’ em With It,’ ‘I ain’t Talking Spaulding,’ and ‘Yeaaa Yeaaa’ were among the mixtapes’ songs that garnered a lot of popularity and proved popular among teenagers.

The song ‘Drip From My Walk’ became exceptionally famous on the internet and was featured on Instagram multiple times.

Famous’s next remix album, ‘Dexter the Robot,’ was published in 2016, and featured the songs ‘Living My Life,’ ‘Switch it Up,’ and ‘Took Time.’

Within a week of its debut, this album had over a million views on the Spinrilla app. It is widely regarded as his best musical work, with the most evolved sound and rapping technique.

Fans adored his EP, ‘Different,’ which was published in 2016 and had songs like ‘Finish Him,’ ‘All the Time,’ and ‘Switchin’ off.’

In 2017, Dex released two mixtapes, ‘The Rich Forever Way’ and ‘Rich Forever 3’, in cooperation with Rich the Kid’s label. They became a phenomenon with songs like ‘Windmill featuring Rich the Kid,’ ‘New- Wave featuring Madeintyo,’ and ‘You Flexing featuring Jay Critch.’

‘Lemonade,’ ‘My Energy,’ ‘Windmill featuring Rich the Kid,’ ‘Serenade,’ and ‘I Had to’ featuring Lil Tracy and Famous Dex are among the rapper’s hit tracks.

Famous became well-known on the internet after releasing official music videos for his albums. More than one million people have seen his latest ‘Xans’ video. Dex’s future effort is his debut album, ‘Dexter Meets Dexter,’ which will be released in 2017.

Drill rappers are recognized for their energetic strong beats and vibrant and furious party rhymes. Famous’ estimated net worth is $ 0.4 million as of 2017, and as a well-known hip-hop artist, he will continue to rise in the next years.

Famous became embroiled in a scandal after being captured on a security camera severely hitting his fiancée in the hallway of a Hollywood condominium on September 21, 2016, and was sentenced to prison. Puma terminated his sponsorship contract three days later.

In one of his videos from 2014, he was seen wearing Chief Keef’s robbed chain.

Behind The Curtains Famous was born in Harlem, New York City, on September 6, 1993, and reared in Chicago, Illinois.

He was born to Dexter Gore, Sr., a US Army Lieutenant who died in September 1997, and Pamela Winters, an IHOP server and cook (died on 26th February 2016).

He attended a Catholic school in Hyde Park and also attended Hernandez Middle School and Paul Roberson High School in Chicago for a short time.

After Dex apologized for his misdeeds, he and his girlfriend, Baby Mamma, reconciled. In 2017, they welcomed a newborn boy into the world. He also has two kids, and he claims that he will go to any length for them.

Famous Dex is a rapper from the United States with a net worth of $6 million. Dexter was born in Chicago.