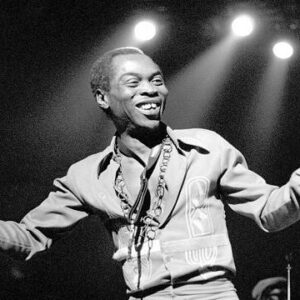 Afrobeat was invented by Nigerian singer and composer Fela Kuti (a unique combination of funk, psychedelic rock, jazz, and Yoruba chants). He also rose to prominence as a political force in Nigeria and internationally, a vocal opponent of both bureaucratic corruption and the legacy of colonialism, and a prolific civil rights activist. Deeply motivated by the Black Panther Party’s beliefs, Kuti’s music underwent a drastic transformation when he switched to pidgin English to broaden his pan-African appeal. The musician was detained more than 200 times when the Nigerian government, which he lambasted, did not take kindly to his catechisms. Additionally, the authorities persistently harassed his family and associates. Kuti was simultaneously married to multiple women and practiced polygamy. Three of his eight children were born in his first marriage. After his passing, Kuti’s reputation only grew stronger, and he is still revered as an African great.

On October 15, 1938, in Abeokuta, Nigeria, Olufela Olusegun Oludotun Ransome-Kuti (commonly known as Fela Anikulapo-Kuti or just Fela) was born. Funmilayo, his mother, was a feminist and anti-colonialist activist who was the first woman to drive a car in Nigeria.

His father, Israel Oludotun, was the first president of the “Nigeria Union of Teachers” and a clergyman in the Anglican church. He had a sister named Dolu and two brothers named Beko and Olikoye, both of whom went on to become well-known physicians. Wole Soyinka, a writer, was his cousin and the first African to be awarded the “Nobel Prize for Literature.”

After graduating from high school in Abeokuta, Kuti worked for the “Federal Ministry of Commerce” for a short time as a clerk before being sent to London to pursue a career in medicine. He made the decision to switch to music once he arrived in London and enrolled at the “Trinity College of Music.”

While attending college, Kuti started his first band, “Koola Lobitos.” He reformed the band, pursued training to become a radio producer and collaborated with trumpeter Victor Olaiya after returning to Nigeria in 1963.
He created Afrobeat for the first time when visiting Ghana in 1967. He went on the trip in order to develop new musical ideas.

During a 10-month tour of the US in 1969, Kuti and his companions encountered Sandra Izsadore, a “Black Panther” activist who introduced him to the ideologies of Malcolm X and other “Black Power” proponents. The encounter captivated Kuti, who later attributed much of his activity to it. He also changed the name of his band to “Nigeria ’70” during this time. Kuti returned to Nigeria and renamed his band Afrika ’70 after encountering issues with US immigration authorities.

After returning from this trip, the band started to give sociopolitical themes more attention than just romantic ones. In 1974, Kuti erected a fence around his residence and founded the “Kalakuta Republic,” a self-governing commune. There was a recording studio here.

In an effort to reconnect with Nigeria’s origins, he also established a nightclub where he performed his music and held traditional Yoruba rites.

He released “Zombie,” a politically charged song that criticized the Nigerian military’s tactics, in 1977 along with “Afrika ’70.” This album, although extremely well-liked by the general population, sparked a rapid and terrible response from the government, which dispatched 1000 soldiers to attack the “Kalakuta Republic,” damaged his property, hurt Kuti, and pushed his elderly mother out of a window.

Later, his mother passed away from her wounds, inspiring Kuti to transport her coffin to the home of a Nigerian general and write two more songs denouncing the ruling party.

He participated in two important concerts in 1978: one in Accra, which resulted in a travel restriction from Ghana, and another in Berlin, which caused the majority of his group to disband owing to worries about his financial irresponsibility. He also dropped the surname name “Ransome,” which he thought to be a slave name, and changed his middle name to Anikulapo (“He who carries death in his bag”) during this time.

He relocated to Ikeja after his return from Europe and opened a new club, which quickly became a hub for drug-related activities. When the government’s anti-Fela sentiment reached a new high, he decided to create his own political party, the “Movement of the People” (MOP), and run for president.

After the military ousted the civilian administration and denied his candidacy, they started harassing the musician again. He subsequently founded a new band called Egypt ’80 and credited Egyptian accomplishments for Africa.

He was accused of smuggling money in 1984, detained, and sentenced to 20 months in prison before being freed as a result of a new coup. The entire operation was driven by politics. He was detained for the kidnapping of a young woman who lived on his property a few months later. He ultimately received an acquittal. After a death occurred in his club, he was also charged with murder.

Through the 1980s, he continued to compose music, taking the stage at a significant “Amnesty International” event in New Jersey and recording “Beasts of No Nation” right before apartheid in South Africa was abolished.

He started getting sick in the early 1990s. Kuti slowed down and stopped making music after being arrested once more for murder in 1993 along with three of his “Afrika ’70” comrades, leaving his son, Femi, to carry on his legacy.

His 1977 record “Zombie” is still regarded as a classic, made all the more potent by the exorbitant state response it elicited.

After his mother was killed by the military, he wrote the singles “Coffin for Head of State” and “Unknown Soldier.”
With his famous song “I.T.T. (International Thief Thief),” he once more criticized the “ITT Corporation” and the military.

A pan-African political milestone, “Beasts of No Nation” was released in 1989 as a reaction to comments made by the former president of South Africa.

While Sola was born in Lagos, Nigeria, the other two kids were born in England. A musical legend in his own right, Femi was first unveiled on stage during one of his father’s European tours. Seun Kuti, one of at least five additional children born to Kuti, is also a well-known singer.

He advocated polygamy and wed 27 women simultaneously in 1978. Though he eventually changed to a rotating system in which he kept 12 wives at once, he eventually came to the conclusion that marriage was an “imposition” and divorced all of them. His treatment of women (both in his music and personal life) has come under intense criticism due to accusations of misogyny.

On August 2, 1997, in Lagos, he passed away due to the consequences of AIDS. Three days of processions and a public service followed his funeral.

At the time of his passing, Fela Kuti, a musician, composer, and human rights advocate from Nigeria, had a $5 million net worth. His intellectual property, such as his name, likeness, trademarks, and music repertoire, which gained in value rapidly following his passing, is included in that net worth.

Kuti was known for his crazy performances, often gyrating over the keyboard while only sporting a pair of bikini panties.

He pledged to learn how to play the saxophone in 24 hours after having a disagreement with his saxophonist, and after spending 17 hours practicing, he took the stage and expertly played a variety of saxophone solos.