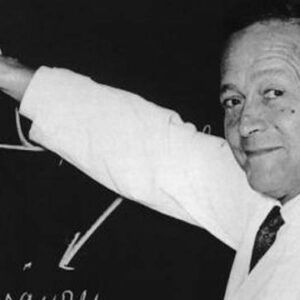 In 1964, German biochemist Feodor Lynen and German American scientist Konrad Bloch shared the Nobel Prize in Physiology or Medicine for their independent discoveries linked to the mechanism and control of cholesterol and fatty acid metabolism. His studies focused on elucidating the chemical analysis of metabolic procedures in living cells, as well as metabolic regulation devices. He identified the molecular structure of ‘acetyl coenzyme A’ or ‘acetyl-CoA,’ an important molecule that plays a key role in metabolism. He received his PhD from the ‘University of Munich,’ where he also taught chemistry. He later worked at the university as an associate professor and eventually as a professor of biochemistry. In Munich, he was named director of the ‘Max-Planck Institute for Cellular Chemistry.’ He got several other accolades and honors for his contributions to scientific study in addition to the ‘Nobel Prize.’ In 1963, he received the Otto Warburg Medal from the German Society for Biochemistry and Molecular Biology, and in 1967, he received the Norman Medal from the German Society for Fat Research. In 1965, he was awarded the Federal Republic of Germany’s Grand Cross of Merit with Star and Sash. In 1971, Lynen was awarded the ‘Pour le Mérite for Science and Art,’ and in 1972, the ‘Austrian Decoration for Science and Art.’

He was born on April 6, 1911, in Munich, Germany, to Wilhelm and Frieda Lynen. He was the seventh of eight children in their family. His father was a mechanical engineering professor at Munich’s Technical University.

He graduated from Munich’s ‘Luitpold-Gymnasium’ with a high school diploma. At 1930, he enrolled in the chemistry department of the ‘University of Munich,’ following his interest in science.

Heinrich Wieland, Walter Gerlach, Kasimir Fajans, and Otto Hönigschmidt were among the prominent teachers who guided him. Heinrich Wieland, a Nobel Laureate in Chemistry, who guided him through his graduation, left an indelible impression on him, and he became acquainted with the discipline of biochemistry from that point on.

After presenting his paper ‘On the Toxic Substances in Amanita,’ he received his PhD on February 12, 1937.
He remained in Germany during the ‘Second World War,’ never leaving the nation.

In 1942, he started as a chemistry lecturer at the ‘University of Munich,’ and after a few years, he was promoted to assistant professor in 1947. He worked as a biochemistry professor from 1953 onwards.

He remained a member of the university’s faculty until his death. During his time at the institution, he oversaw the research of approximately ninety students, many of whom went on to achieve significant success in academia or industry.

In the 1940s, he began researching how living cells convert simple chemical substances into complex molecules such as lipids and sterols, which are crucial for the body’s survival.

After the ‘Second World War,’ he began publishing his own scientific results and learned of comparable study being conducted in the United States by Konrad Bloch. With the passage of time, the two scientists began to share their discoveries.

As a result of the ‘Second World War,’ American and European scientists turned their backs on their German peers. Only four German biochemists were invited to the ‘First International Congress of Biochemistry,’ which took place in Cambridge, UK in July 1949, and Lynen was one of them.

Many people were drawn to him because of his pleasant personality and thorough investigation. Years later, in 1975, he was chosen President of the ‘Alexander von Humboldt Foundation,’ which intended to improve worldwide scientific relations with Germany.

Lynen in Germany and Konrad Bloch in the United States independently analyzed the sequence of processes taken by animal cells to produce cholesterol and so determined the sequence. They discovered that the body makes squalene from acetate before converting it to cholesterol.

In 1951, he presented a study describing the first stage in the chain of reactions that leads to the formation of cholesterol. He discovered that a molecule called acetyl-coenzyme A, which is formed when an acetate radical combines with coenzyme A, was required to start the chemical chain reaction.

Thus, he was the first to describe the molecular structure of ‘acetyl coenzyme A’ or ‘acetyl-CoA,’ a major molecule that plays an important role in metabolism. This discovery not only benefitted him in his studies, but it also helped him create his international reputation. He also discovered that biotin, a water-soluble Vitamin B7, was required for the procedure.

In addition, he discovered that acetyl-coenzyme A is required for the production of fatty acids. He also looked into fatty acid catabolism, which is a group of metabolic pathways that make energy by burning fatty acids in food to produce water and carbon dioxide.

In 1954, he was named director of Munich’s ‘Max-Planck Institute for Cellular Chemistry.’ Following the advice of two upcoming German Nobel Laureates, physiologist and medical doctor Otto Heinrich Warburg and chemist Otto Hahn, the role was created just for him.

‘The pathway from “activated acetic acid” to terpenes and fatty acids’ was the topic of his Nobel Lecture on December 11, 1964.
In 1972, he was elected President of the ‘Gesellschaft Deutscher Chemiker’ (GDCh). It is an academic society and a professional organization that represents German chemists’ interests.

His findings on the mechanics and control of cholesterol and fatty acid metabolism demonstrated the importance of cholesterol in the human body and aided further research into the impact of cholesterol on stroke and other heart-related illnesses.

In 1964, he and German American biochemist Konrad Bloch were jointly awarded the Nobel Prize in Physiology or Medicine.

The net worth of Feodor Felix Konrad Lynen is unknown.