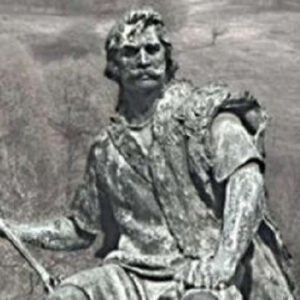 A soldier named Flavius Odoacer rose through the ranks to rule Italy. His reign, also known by the names Flavius Odovacer or Odovacar, signaled the collapse of the Western Roman Empire. After overthrowing the final Roman monarch, Romulus Augustus, the Germanic commander was crowned the first non-Roman King of Italy in 476 CE. During his tenure, Odoacer was successful in implementing a few significant administrative improvements with the help of the Senate. For instance, the common people embraced his land distribution plan. As a warrior, Odoacer had achieved victory over places like Dalmatia, Sicily, the Danube region, etc. Theoderic the Great eventually overcame him and murdered him. Theoderic encouraged Odoacer to negotiate a peaceful resolution when he sought refuge in Ravenna, but when Odoacer arrived at Theoderic’s camp, he assassinated him.

The history of Odoacer is a subject of much debate. Odoacer is thought to have been of Scirian ancestry and was born about 433 C.E., according to many knowledgeable academics.

It was determined in 1983 after examining primary documents that his mother was of Scirian ancestry and his father was of Thuringian ancestry. Odoacer was also determined to have been born into a Germanic tribe.

He was claimed to be Edeko’s son. But when academics learned that there were two people with the name Edeko, confusion ensued. One was the Attila’s emissary, while the other was the leader of the East Germanic Scirii tribe.

In the 17th century, it was hypothesized that the two characters were the same person, and it was established that Edeko was Odoacer’s father.

Odoacer had been referred to as the “King of Turcilingi” by Jordanes, an official in the Eastern Roman Empire. However, Jordanes also said that Odoacer was a Rugii, an East Germanic tribe, in his “Romana” (a Latin book).

He was also identified in “Consularia Italica” as the Heruli king. He was referred to as “the ruler of the Goths” by the renowned chronicler Theophanes.

Odoacer’s existence is first mentioned in the “Decem Libri Historiarum,” a history book. Scholars like Reynolds and Lopez hypothesized that Odoacer may have gone by the names Adovacrius or Odovacrius and that he may have fought for his country against the Visigoths in 463 C.E.

A group of young men traveling toward Italy is mentioned in Eugippius’ book “Life of Saint Severinus.” The company had halted, according to the Bible, to show reverence to a holy man by the name of Severinus.

A young man (perhaps Odoacer) is blessed by Severinus with a prophecy that he would achieve fame in Italy.

Around 470 C.E., Odoacer and the Scirians invaded Italy and assimilated into the Roman military. During the conflict with Emperor Anthemius in 472, Odoacer and his army of Germanic troops stayed obedient to a Germanic commander by the name of Ricimer.

Procopius, a scholar, also asserted that Odoacer served as the emperor’s bodyguard. Ricimer received assistance from the Germanic troops in his fight to install Olybrius as emperor. Ricimer and Olybrius unexpectedly passed away, which enabled Orestes the chance to take over as Magister Militum in 475 C.E.

Odoacer as the Federation’s Head

Odoacer got the opportunity to head the Germanic foederati while Orestes was chosen as the patrician by the notorious Western Roman Emperor Julius Nepos.

Nepos’ choice did not go down well with the Senate or the soldiers because Orestes did not appear to be a reliable person. Even in a conflict between the Roman Empire and the army of Attila, Orestes fought against Rome. It didn’t take long for Orestes to confirm their assertions.

Nepos was removed from power by Orestes, who led his army into Italy. Orestes was pushed by his warriors to take over the emperorship that Nepos left empty when he fled in fear for his life.

Instead of accepting their advice, Orestes proclaimed his son Romulus Augustus the new emperor. The troops asked the emperor to divide up Italy among them as payment for their services following Nepos’ exile. They added that Nepos would be forced out of Italy by this action.

The soldiers saw the idea more as a reward than they deserved. They were also aware that the grant would give them the security they needed to reside there. However, Augustus ignored their request, which infuriated the troops.

The soldiers moved towards Odoacer to overthrow Augustus when the latter refused their plea. As soon as Augustus learned about the uprising, he rushed to Pavia in search of safety.
Odoacer entered the city by force only to discover Augustus had fled and had assembled an army in Piacenza. He quickly defeated and caught Augustus, though.

Odoacer was crowned the first barbarian king of Italy on August 23, 476 CE. Odoacer participated in and won the Battle of Ravenna to demonstrate his mettle as a ruler.

The Western Roman Empire officially collapsed on September 4, 476 CE. Odoacer was unable to murder a young man like Augustus, so he gave up on the idea and transported him to Campania, where he was placed under house arrest.

Odoacer issued a personal proclamation saying that he would be proud to rule Italy after being selected as the king by his troops.

In the meantime, Zeno has crowned Eastern Emperor. To congratulate the emperor on his position, the Senate dispatched an embassy to him.

Additionally, it served as a means of informing the emperor about the new Italian king. Zeno praised Odoacer by giving him the title of “Patrician,” despite the fact that he hadn’t asked for his approval.

Zeno also suggested that the Italian monarch extend an invitation to Nepos to return to the realm. While this was going on, Nepos created a new court in Salona and gained acceptance throughout the rest of Italy, particularly in Constantinople, which referred to Augustus as the “father of traitors.”

Zeno’s counsel was ignored by Odoacer, who instead used the picture of Nepos on his country’s coins. After Nepos was killed in 480 C.E., Odoacer ended the co-emperorship and took total control of Italy.

When he was at the height of his power, Odoacer was 42. He quickly rose to the position of power in Italy.

Odoacer was reputed to be a generous ruler. The entire nation appreciated his modesty. He was a feared monarch as well, though.

Through a contract with the Vandals, he conquered Sicily for the first time in 476 CE. He concentrated on enhancing Italy’s conditions for the following few years.
He seized Dalmatia in 480 C.E. shortly after Nepos was killed. After defeating Nepos’ assassins, he took control of the territory.

He did not impose his faith and ideas on his people despite being raised as an Arian Christian. Trinitarian Christians made up the majority of his subjects, and they were free to practice whichever religion they chose. The Trinity was contested by a small number of Arian Christians, who were reviled by Constantine the Great.

Death and Fall of Odoacer

Zeno started to dislike Odoacer around 487 C.E. Zeno was mostly enraged by Odoacer because of their increasing friendship with Zeno’s adversary Illus.
According to legend, Zeno encouraged the Rugians of Norcam to attack Italy. However, Odoacer invaded their area and overcame the Rugians.

To overthrow Odoacer, Zeno then appealed to Theodoric, the Ostrogoth king. In 488 CE, he crowned Theoderic king of Italy.
Within a year of his invasion, Theodoric had the whole of Italy under his control. Odoacer was forced to seek safety in Ravenna.

Theodoric entered Ravenna on March 5th, 493 CE, and within ten days he discovered Odoacer. Odoacer was invited to a feast where he later assassinated him.

Sunigilda, Odoacer’s wife, was stoned to death after her husband’s passing. Son of Odoacer and Sunigilda.

Thela, their son, was compelled to live in exile in Gaul. Sadly, Theodoric also killed him as he attempted to invade Italy.
Onoulphus, the brother of Odoacer, was likewise murdered in the chapel where he had sought safety.

The estimated net worth of Flavius Odoacer is unknown.