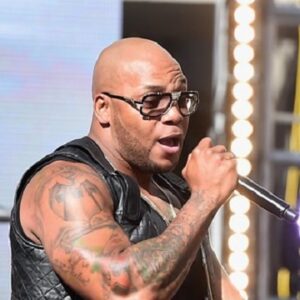 Tramar Lacel Dillard, better known by his stage name Flo Rida, is a rapper, songwriter, and performer from the United States. He has created countless successful and chartbusting singles and albums since his first single ‘Low,’ making him one of the best-selling music artists of all time. He joined an amateur rap group called ‘GroundHoggz’ after developing a strong interest in music at a young age. His exposure to music was boosted by his brother-in-law, who worked as a hype man for the local rap group ‘2 Live Crew.’ Initially, he joined with ‘Poe Boy Entertainment’ in order to gain a foothold in the music industry. His debut single, ‘Low,’ released by ‘Atlantic Records,’ became his actual breakthrough, topping multiple national and international charts, including the Billboard Hot 100 in the United States, shattering digital download sales records, and receiving several platinum certifications. The song was included in his debut studio album, “Mail on Sunday,” as well as the soundtrack for the film “Step Up 2: The Streets.” He went on to have multiple big songs, including ‘Wild Ones,’ ‘Right Round,’ and ‘Whistle,’ as well as albums like ‘Wild Ones,’ and ‘R.O.O.T.S.’.

Tramar Lacel Dillard was born on September 16, 1979, in Carol City, Florida, United States, to parents who had eight children. He’s been a music fan since boyhood, and he received his first taste of actual music through his brother-in-law, who worked as a hype man for the local rap group ‘2 Live Crew.’

He joined the amateur rap group ‘GroundHoggz’ when he was in ninth grade. The other three members of the gang were his apartment complex neighbors. For eight years, the four members of the ensemble collaborated.

In 1998, he graduated from high school and enrolled at the University of Nevada, Las Vegas, to study international business management, but dropped out after only two months. He also spent a few months at ‘Barry University,’ but because his heart craved for music, he departed after a few months to pursue his passion for music.

As a result of his relationship with his brother-in-law, he became the hype man and back-up rapper for Fresh Kid Ice, a member of the ‘2 Live Crew.’ In this capacity, he toured with Ice and appeared on many tracks from the latter’s album ‘Freaky Chinese’ (2004).

His work with Ice grabbed the notice of Jodeci member DeVante Swing, and despite working with A&R, he aspired to be associated with a respectable label and was turned down by major record labels.
He joined the American hip hop group ‘Hot Boyz’ in 2000.

During his early years of struggle, he worked a variety of odd jobs to support his musical ambitions, staying in motels and even on the streets on occasion. He returned to Florida after receiving a call from a representative of the American record label ‘Poe Boy Entertainment’ (now ‘Poe Boy Music Group’). In 2004, he signed with the label.
His first major release was the song ‘Birthday,’ which featured Rick Ross and was included in his debut album ‘Mail on Sunday.’

For the first time, he was featured in a guest appearance alongside Rick Ross, Dre, C-Ride, Trina, Brisco, and Trick Daddy on the song “Bitch I’m Off Dade County” from DJ Khaled’s 2007 album “We the Best.” He released his first song, ‘Low,’ on October 9, 2007, through ‘Atlanta Records,’ which was included in his first studio album, ‘Mail on Sunday.’ The song “Step Up 2: The Streets,” written by Tramar Dillard and T-Pain and starring the latter, was featured in the American blockbuster dance film “Step Up 2: The Streets” (2008).

‘Low’ became a massive international smash, reaching the top of various national and international charts, including the US Billboard Hot 100, US Hot Rap Songs (Billboard), US Rhythmic (Billboard), the ARIA Charts, and the Canadian Hot 100.

‘Mail on Sunday’ included a number of guest artists, including Lil Wayne on ‘American Superstar,’ Timbaland on ‘Elevator,’ will.i.am on ‘In the Ayer,’ and Sean Kingston on ‘Roll.’

‘Right Round,’ ‘Shone,’ ‘Sugar,’ ‘Jump,’ Be on You,’ and ‘Available’ were among the album’s six songs, which earned it a Grammy nomination for best rap album at the 52nd Grammy Awards.

‘Right Round,’ the first single from ‘R.O.O.T.S,’ was released on January 27, 2009. It climbed to the top of the US Billboard Hot 100 and US Billboard Pop 100 charts, where it remained for six weeks.
The single ‘Right Round’ was featured in a number of films, including ‘Rush Hour,’ ‘The Hangover,’ and ‘Pitch Perfect,’ among others.

He made a cameo appearance in Alexandra Burke’s song “Bad Boys,” which was released on October 12, 2009, and debuted at #1 on the UK Singles Chart. His third studio album, “Only One Flo (Part 1),” was released on November 30, 2010, but it failed to achieve the same level of success as his predecessors, and it remains his least successful release to date.

In December 2010, he formed his own label, ‘International Music Group,’ which has so far signed Git Fresh and Brianna.

On July 3, 2012, his fourth studio album, ‘Wild Ones,’ debuted at #14 on the US Billboard 200 and topped the US Dance/Electronic Albums chart (Billboard). Its lead single, ‘Good Feeling,’ which he dedicated to the late Etta James, reached #3 on the Billboard Hot 100 in the United States.

He’s now working on his fifth studio album, ‘The Perfect 10,’ which will most likely feature the lead single, ‘Game Time,’ which was published on February 17, 2017.

‘Low’ became the longest-running chart-topping single in the United States in 2008, spending ten weeks on the Billboard Hot 100. It was ranked #3 on the Billboard Hot 100 Songs of the Decade list in the United States.
With a digital download sales record of more than six million, ‘Low’ became the decade’s most downloaded single. It gained an 8 Platinum award from the RIAA, as well as Platinum and Gold certifications from a slew of other organizations.

‘Right Round’ sold 636,000 digital copies in its first week, shattering Flo Rida’s previous record of ‘Low.’ With over twelve million certified downloads, it became his best-selling single and the quickest million-selling download in the history of the digital era in the United States.

Flo Rida has a net worth of $30 million.