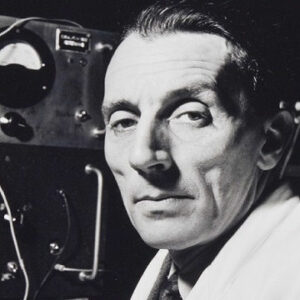 Frederic Joliot Curie was a French physicist who won the Nobel Prize. He and his wife, Irene Joliot-Curie, are known for finding a way to make radioactivity happen on purpose. His name was Jean Frederic Joliot when he was born in Paris, France. His father was a merchant. As a kid, Frederic was more interested in sports than in school. But his future held something else for him. Joliot got a research scholarship after he finished school and his time in the military. Marie Curie hired him as an assistant because Paul Langevin thought he would do a good job. This appointment changed both his career and his personal life. He fell in love with Marie Curie’s daughter, Irene Curie, and later married her. They worked together to look into and learn about the unknown parts of science. While studying the structure of atoms and then the bombardment of stable nuclides, the two scientists became interested in making radioisotopes that were not made by nature. Through their scientific work, new radioactive elements were made. It was a big step forward in chemistry, and in 1935, it won them the Nobel Prize in Chemistry. Joliot-research Curie’s work was slowed down by the Second World War and the administrative work that came after it. At the end of his career, he was the first High Commissioner for Atomic Energy in France, the director of the French National Centre for Scientific Research, and the Chair of Nuclear Physics.

Jean Frederic Joliot was born on March 19, 1900, in Paris, France. His parents were Henri Joliot and Emilie Roederer. His father made a living as a merchant.

At first, Joliot was more interested in sports than in school. He went to the Lycee Lakanal boarding school at first, but later, when money got tight, he dropped out and went to the Lavoisier public school instead.

After school, he went to École de Physique et de Chimie Industrielle, where he got a degree in engineering with the highest grade.

After his time in the military, Frederic Joliot Curie took a research scholarship, which helped him get a job as Marie Curie’s assistant at the Radium Institute in 1925. During this time, he fell in love with Marie Curie’s daughter, Irene Curie, and later married her. Both of them took the last name, Joliot-Curie.

Marie Curie pushed Joliot-Curie to get his second baccalaureate, which he did. He got his license in es sciences in 1927. He kept studying, and in 1930, he got a doctorate in science. The electrochemistry of radio elements was the subject of his thesis. He taught at the École d’Électricité Industrielle Charliat at the same time.

During this time, the husband and wife team did a lot of research on how the atom is put together. Their work on the projection of the nuclei helped Chadwick and Anderson find the neutron and positron in 1932, respectively.

In 1934, Joliot-Curie and Irene Joliot-Curie made the most important discovery of their lives: they found a way to make radioactivity happen on purpose. It was a big step forward in science. Alpha particles were fired at boron, aluminum, and magnesium for the same reason.

After bombardment, they got radioactive isotopes of elements that aren’t usually radioactive, like 13 of nitrogen, 30 of phosphorus, 27 of silicon, and 28 of aluminum. Since these elements didn’t exist in nature, they were easy to break down, giving off both positive and negative electrons.

After scientists found out how to make isotopes in a lab, they realized they could be used to track chemical changes and physiological processes. The isotopes that were found were used in many different ways. For example, it was found that the thyroid gland absorbs radioiodine, and the path of radiophosphorus in the body’s metabolism was tracked.

Frederic and Irene Joliot-Curie won the Nobel Prize in chemistry in 1935 for their work on making radioactivity happen on purpose. It was because of what they found that short-lived radioisotopes were found to exist.

In the meantime, Joliot was studying and doing research in science. He was also interested in social issues, so in 1934 he joined the Socialist Party (S.F.I.O.) and in 1936 he joined the League for the Rights of Man.
Joliot-Curie left the Radium Institute in 1937 to become a professor at the College de France. He worked on chain reactions during this time. He built Western Europe’s first cyclotron.

He was able to build a nuclear reactor that used uranium and heavy water to turn nuclear fission into energy. After that, he found the physical cause of the phenomenon. He got five patents between 1939 and 1940.

Joliot-research Curie’s work slowed down in 1940 when World War II broke out. When the Nazis invaded, Hans von Halban, Moshe Feldenkrais, and Lew Kowarski helped Joliot sneak his research materials into England.
During the time that France was in charge, he was a member of the French Resistance. He was President of the National Front and later started the French Communist Party.

After the war ended in 1945, Joliot-Curie became the Director of the Centre National de la Recherche Scientifique and then the first High Commissioner for Atomic Energy for France. Two years later, he was in charge of building France’s first atomic reactor. In 1950, he was taken off of his job as a politician. He kept his job as a professor at the College of France.

He was one of the eleven people who signed the Russell-Einstein Manifesto in 1955. After his wife Irene Joliot-Curie died in 1956, he took over her job at the Sorbonne as Chair of Nuclear Physics.
At the end of his career, Frederic Joliot-Curie oversaw the building of a nuclear physics center at Orsay.

The most important thing Joliot-Curie did was work with his wife and fellow scientist, Irene Curie. Together, they found out how to make radioactivity happen on purpose, which led to the discovery of radioisotopes with short half-lives.

The discovery was a big step forward for chemistry because it led to the creation of radioactive isotopes of elements that did not exist in nature. These isotopes easily break down, giving off both positive and negative electrons.

In 1935, he and his wife won the Nobel Prize in Chemistry for having found a way to make radioactivity happen on purpose.

In 1925, Frederick Joliot got a job as Marie Curie’s assistant. This changed both his personal and professional life. He first met Irene Curie, who was Curie’s daughter. They liked each other right away, and on October 4, 1926, they got married. After they got married, they combined their last names to make Joliot-Curie.

After he died, a crater on the moon was named for him. Also, in Sofia, Bulgaria, a street and a metro station are named after him. Other countries with streets named after him are Canada, Poland, Warsaw, Wroclaw, Poprad, Bucharest, North Montreal, Romania, Slovakia, and others.
The government of Romania put out a stamp to remember Frederic Joliot-work.

Frederic is one of the wealthiest and most well-known physicists. Wikipedia, Forbes, and Business Insider all say that Frederic Joliot Curie has a net worth of about $1.5 million.