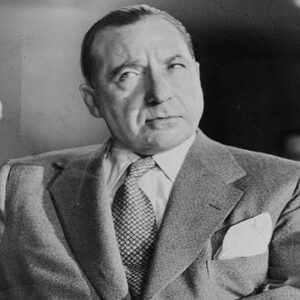 Frank Costello was an Italian-American gangster and crime lord who was also known as the “Prime Minister of the Underworld.” He was the leader of the “Luciano Family,” a significant New York crime family. He was good friends with Sicilian crime lord Charlie “Lucky” Luciano. Politically, Costello was quite powerful and influential. He was born in Italy, and he and his family eventually immigrated to the US. His older brother introduced him to the criminal underworld. Costello first engaged in minor offenses including theft, violence, and bootlegging before joining forces with significant mafia organizations. During the “Prohibition time,” he engaged in the rum-running industry. Later, he built a gambling empire and became the family’s primary source of income.

Francesco Castiglia was given the name Frank Costello on January 26, 1891 in Cassano allo lonio, Cosenza, Calabria, Italy. Luigi Castiglia, his father, eventually immigrated to the United States and lived in East Harlem, where he operated an Italian grocery business. In 1895, the young Costello joined him, along with his mother Maria and older brother Edward.
He and his older brother both got involved in minor criminal activity at a young age. As he grew older, he joined the ‘104th Street Gang,’ a local Italian gang, and quickly rose to the position of leader. He traded in booze to make some quick cash. He committed robberies, assaults, and thefts with his gang members.

He was detained multiple times between 1908 and 1917 for various offenses. He changed his name to Frank Costello in 1916. He was imprisoned for concealing a weapon later that year. He then made the decision to put down his gun and turned his attention to organized crime.

He started working for Ciro Terranova, the head of the Morello crime family, after being married in 1918. At about this time, he made friends with Charlie “Lucky” Luciano, a Sicilian. The other Luciano family members disapproved of Lucky’s friendship with Costello because he was not a Sicilian.

Together with other Italian-Americans and a few Jewish collaborators, including Bugsy Siegel, Vito Genovese, Meyer Lansky, and Gaetano Lucchese, Luciano and Costello established a group. Together, they began operating extortion, gambling, theft, and drug businesses. In 1920, during the so-called “Prohibition Period,” they made money by selling alcohol clandestinely. Arnold Rothstein provided the funding for these procedures.

Costello joined the Mafia family of Sicilian underworld boss Joe Masseria in 1922 along with Luciano and others. He joined Irish mafia boss Dwyer’s rum-running enterprise, “The Combine,” in 1924.

In the 1920s, Costello rose to prominence in the criminal underworld. He oversaw a variety of gambling enterprises, including slot machines, punch cards, bookmaking, casinos, and casinos. He made a lot of political friends and established a vital link between the criminal underworld and ‘Tammany Hall,’ an institution affiliated with the Democratic Party. As a result, the criminal underworld was able to bribe or cut deals with government representatives, law enforcement officers, lawmakers, and judges. Between 1927 and 1929, Costello, Luciano, and their friends organized a “National Crime Syndicate” by bringing together other criminal figures from all over the nation.
The relatively new “Maranzano Family” presented the “Masseria Family” with fierce battle for control of the local administration. The “Maranzano Family” hailed from Sicily’s “Catellammare del Golfo,” and it was quickly taking control of the criminal underworld’s activities in New York. Rivalry between the “Masseria” and “Maranzano” families gave rise to the “Castellammarese War,” an organized crime conflict. It persisted for almost two years and had an impact on the earnings and underground business.

The leaders of both families were to be removed, “Luciano” and others decided. After Masseria’s death in April 1931, Luciano became the family’s head, renaming the group the “Luciano Family.” Later, in September 1931, Maranzano, who referred to himself as the “Boss of all bosses,” was also assassinated. This is how the ‘Luciano Family’ rose to prominence in the criminal underground of New York.

Costello ran a nationwide gambling enterprise and made a lot of money for the “Luciano Family.” The New York City mayor Florello La Guardia seized and burned thousands of Costello’s gaming machines in 1934. Then Costello began operating his casino in Louisiana and New Orleans.

Luciano was detained in 1936 for running a prostitution ring and received a 30-year prison term. From inside the jail, he named Vito Genovese the new leader of the crew. Genovese fled to Naples, Italy the next year after being charged in an old murder case. Luciano made Costello the head of the “Luciano Family” as a result of this. He turned out to be really beneficial for the family. He had a good reputation among the capos and the gang’s men. Averse to drug trafficking was Costello. He was a cultured don who valued intelligence over strength.

Genovese was cleared of murder charges in 1946, and upon his return to the US, he demanded to be restored as the head of the “Luciano Family.” However, Costello refused to stand down, and this led to a protracted struggle for control of the underworld between the two.

The “Kefauver Hearings,” or the investigations into organized crime, were conducted by the US Senate in 1950–1951. A committee led by Senator Estes Kefauver looked into these matters. At the time, Costello was regarded as the top mafia boss in America, yet he yearned for real dignity.

As Costello left the sessions, he was found guilty of contempt of the Senate. He received an 18-month prison term. He received a second 5-year sentence for tax evasion after being released in 1954. On appeal, he was nevertheless set free in 1957.

Genovese attempted to kill him after his release. Costello was shot by Genovese’s driver Gigante in the foyer of his apartment complex. Despite surviving the attack, Costello steadfastly refused to name Gigante as the shooter.
Genovese referred to his family as the “Genovese family” and claimed to be the leader of the “Luciano Family.” Later, Costello reached a reconciliation with Genovese and ended his criminal career. He was permitted to carry on with his enterprises and gaming arrangements. Even after leaving his position, Costello still enjoyed a high level of respect in the criminal underworld.

His former colleagues valued his views and continued to seek his counsel, so he maintained his influence even in his older years.

Following his 1917 release from prison, he fell in love with Lauretta Giegerman, the sister of a close friend, and they wed in 1918. They didn’t have any kids.
He suffered a heart attack and was sent to a hospital in Manhattan in February 1973. He passed away at the hospital on February 18, 1973. In Queens’ St. Michael’s Cemetery, he was laid to rest.

At the time of his death in 1973, Italian American Mafia mobster and criminal lord Frank Costello had a net worth of $1 billion (adjusting for inflation). Frank oversaw one of the richest and most powerful criminal enterprises in history during his lifetime. At its height, his criminal empire brought in the equivalent of $60 billion (after accounting for inflation).