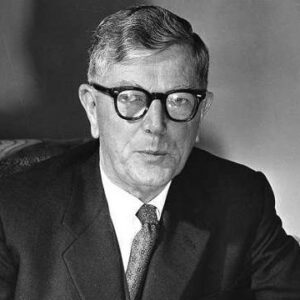 Frank Macfarlane Burnet is thought to be Australia’s best scientist. He spent sixty years of his life studying infectious diseases in people and finding new ones. Starting with microbiology, he moved into bacteriology, then virology, and finally immunology. He was one of the first people to study autoimmune diseases, which happen when the immune system attacks the body’s own tissues, and to use ecological principles to study viral diseases. His early experiments and work led to advances in many areas of medicine, such as vaccines, tissue transplants, monoclonal antibodies, and therapies that use them. This brilliant scientist became known all over the world. He won a number of Australian and international awards, including the Nobel Prize for Physiology or Medicine. His work on how viruses grow in hen’s eggs is still used to make flu vaccines today. He was named the first Australian of the Year because of what he did for Australian science. In addition to making important discoveries and doing experiments, he also wrote a lot of books and gave talks about problems in human biology and society, such as cancer and getting old.

Frank Macfarlane Burnet was born in Traralgon, in eastern Victoria, on September 3, 1899. He was the second of seven children to Scottish immigrants Frank and Hadassah Burnet.
He went to public schools in Traralgon and Terang before getting a full scholarship to Geelong College, which was a boarding school. He went there in 1913.

He finished high school in 1916 and got a residential scholarship to finish his Bachelor of Medicine and Surgery at Ormond College, University of Melbourne, in 1922.
At the Walter and Eliza Hall Institute of Medical Research, where he worked, he began studying the agglutinin reactions in typhoid fever in 1923. He also worked at Royal Melbourne Hospital as a research pathologist.

In 1924, he got his doctorate in medicine. From 1925 to 1927, he used the Beit Fellowship to continue studying bacteria at the Lister Institute of Preventive Medicine in London.
In 1928, he got his Ph.D. from the University of London for his work on bacteriophages, which are viruses that attack bacteria.

When he went back to Melbourne in 1928, Dr. Charles Kellaway, the director of the Walter and Eliza Hall Institute, gave him the job of assistant director. He did research on staphylococcal toxins in addition to his work on bacteriophages.

In 1932, he took a two-year break from work and went to London’s National Institute for Medical Research, which was one of the best places in the world to study viruses. He found the flu virus and came up with a way to grow viruses in chick embryos.

Sir Henry Dale, who ran the Institute, offered him a permanent job there, but he turned it down and went back to Melbourne in 1934 to continue his research on viruses.
His first book, “Biological Aspects of Infectious Disease,” came out in 1940. It had an impact on the field of biology and was translated into Japanese, German, Italian, and Spanish.

So that there wouldn’t be a pandemic of flu during World War II, he started working on making a vaccine against this deadly disease.
Sir Charles Kellaway went to work as the Director of the Wellcome Foundation in London. In 1944, he turned down a chair at Harvard University and became the Director of the Walter and Eliza Hall Institute instead.

After he retired from the Walter and Eliza Hall Institute in 1965, he continued to give guest lectures at the University of Melbourne’s microbiology department and write about virology, immunology, human biology, philosophy, and ethics.

In his later years, he was on a number of national and international committees, in addition to being the head of the Australian Radiation Advisory Committee from 1955 to 1959 and the British Commonwealth Foundation (1966-69).

He wrote several books about immunology and virology, such as “Virus as Organism,” “Viruses and Man,” “The Clonal Selection Theory of Acquired Immunity,” and “Immunological Surveillance.”

In 1934, he found that Rickettsia burnetii was the organism that caused psittacosis and Q fever. He also did research on poliovirus, herpes simplex virus, and epidemiology.

For his work in the field of virology, the Royal Society gave him the Royal Medal in 1947 and the Copley Medal in 1959.
In 1952, he won the Albert Lasker Award for Basic Medical Research. In 1958, the Queen’s Birthday Honors gave him the Order of Merit.

In 1960, he shared the prestigious Nobel Prize for Physiology or Medicine with Sir Peter Medawar for discovering acquired immunological tolerance, a concept that led to the creation of tissue transplantation.
In 1960, he was named Australian of the Year. In 1961, the Japanese Order of the Rising Sun gave him a Gold and Silver Star.

He got ten honorary degrees from universities and colleges, including Oxford, Harvard, Cambridge, Hahnemann Medical College, Medical University of South Carolina, and the University of Melbourne.

While he was working in London, he proposed to Edith Linda Marston Druce. They got married in 1928 when he went back to Australia. They had three children: a son named Ian Burnet and two daughters named Elizabeth and Deborah. In 1973, his wife Linda died of lymphoid leukemia, which affected the lymphocyte cells he was studying.

In 1976, he married Hazel Gertrude Jenkin, a singer who had lost her husband and was working as a volunteer librarian in the microbiology department at Ormond College.
He had surgery for colorectal cancer in November 1984 and got better, but he got sick again with secondary lesions in his thorax and legs, and he died at Port Fairy on August 31, 1985.

The Australian government gave him a state funeral, and he was buried at Tower Hill Cemetery near Port Fairy.
In honor of his work in immunology, Australia Post made a 33-cent stamp for him in 1975.
As a way to honor Burnet, the Walter and Eliza Hall Institute named the Burnet Clinical Research Unit after him in 1986 and started giving the Burnet Prize to an outstanding young scientist every year in 1987.

The 45-cent stamp with Burnet and his fellow graduate Jean Macnamara was one of four Australian stamps released in 1995 to honor seven Australian medical scientists.
In 1999, as part of the celebrations for his 100th birthday, a statue of him was put up in Franklin Street, Traralgon.