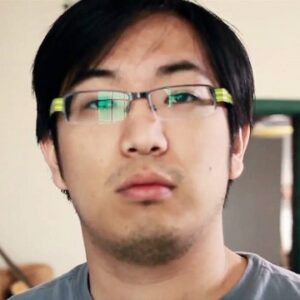 In addition to being a successful professional, Freddie Wong also works as a visual effects (VFX) artist, singer, YouTuber, gamer, and filmmaker. His friends and coworkers refer to him as simply “FreddieW.” When Freddie competed in the Dallas “World Series of Video Games” tournament and won the “Guitar Hero 2” competition in July 2007, he received widespread recognition for the first time as a competitive gamer. Freddie was greatly motivated by the astounding accomplishment and began posting gaming videos on YouTube. These films quickly gained enormous popularity thanks in large part to their satirical nature. In 2007, he also founded the rock group “Helanor Brozevelt,” which was dedicated solely to video games. In 2010, Wong, Desmond “Dez” Dolly, and Matthew Arnold co-founded the production company “RocketJump,” which gave his career a significant boost. Through the “RocketJump” channel on YouTube, Freddie posted cleverly produced videos that went viral and had more than 1 billion views. Additionally, he was a major contributor to the start of the popular online series “Video Game High School.” Additionally, Freddie Wong actively contributed to the establishment of the RocketJump-affiliated YouTube channels “Node” and “BrandonJLa.” Along with RocketJump, Freddie also founded and is in charge of the Los Angeles-based media company Overcrank Media. When Wong first created a feature picture in 2010 under the title “Bear,” he cemented his reputation as an independent director. Jimmy Wong, his younger brother who works as an actor, musician, and YouTuber, looks up to Freddie as a mentor.

The major Freddie Wong chose for graduation shows that he knew from an early age that he wanted to succeed as a filmmaker and VFX expert. Wong received his diploma from the USC-affiliated “School of Cinematic Arts” (University of Southern California). Wong was compelled by the world of gaming and the related technology that enabled game designers to produce high-tech, realistic video games with a variety of animation effects.

When he entered his name in the “Guitar Hero II” competition held in Dallas in 2007 and supported by “World Series of Video Games,” Freddie made an attempt to put his gaming prowess to the test. His cover of a song originally performed by “Freezepop” was deemed the best, and he has been named the competition’s victor. This achievement led Wong to regularly upload entertaining and captivating video games on YouTube as well as to encourage him to create “Helanor Brozevelt,” a rock band focused on gaming, in the year 2007.

Wong performed with his newly formed band at the “Hard Rock Café” in New York as part of a national search for the greatest “rock band” team. Freddie’s career as an independent filmmaker started to take off in 2010, which was highlighted by the assistance he gave to “Joe Penna” while he was filming a McDonald’s commercial. Wong produced, co-directed, and acted in a 2011 TV ad for the video game “Battlefield 3,” which was supported by “Electronic Arts.”

Wong’s career reached a turning point in 2011, which ended up being a pivotal year for him. In 2011, Wong established “Rocket Jump,” a studio for making movies, in collaboration with USC alumni Matthew Arnold and Desmond “Dez” Dolly. The trio collaborated on the web series “Video Game High School,” which they began publishing episodes of in May 2012 under the name “Rocket Jump.” Rocket Jump’s channel has gained popularity over time and now has close to 8 million followers and 1.4 billion video views.

In its 2015 “30 under 30” list, Forbes magazine cited Freddie Wong as one of Hollywood’s rising stars. The extraordinary success of “Video Game High School” encouraged him to partner with “Lionsgate.” The partnership cleared the door for the debut of the sci-fi series Dimension 404 and the action-packed documentary series RocketJump: The Show, among many other cutting-edge projects that are now in development. The Strongest Man, My Music, and The Gauntlet are just a few of the movies, TV shows, and online series that Wong has co-directed, produced and appeared in.

On September 13, 1985, Freddie Wong was born in Seattle, Washington. He attended the local Lakeside School before earning his degree from the University of Southern California School of Cinematic Arts. Jimmy Wong, his younger sibling, who also appears in “Video Game High School” and is a YouTuber and actor, receives advice from Freddie.

American musician and filmmaker Freddie Wong has a $6 million dollar net worth. Freddie Wong, a Seattle, Washington native, earned a degree in cinematic arts from the University of Southern California. He manages two YouTube channels with a combined 4 million subscribers and over 700 million views. He founded and co-owned the Los Angeles-based media business Overcrank Media, which creates both feature films and web video content. In 2010, the business released “Bear,” its debut motion picture. After winning the “Guitar Hero 2” contest at the 2007 World Series of Video Games in Dallas, Texas, he gained wide notoriety. Helanor Brozevelt, the “Rock Band” video game band he founded, was invited to perform at the release of the game as well as a number of other events. Among other things, he is now working on the webseries “Video Game High School.”