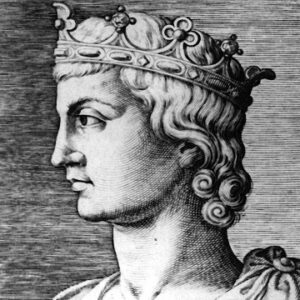 Frederick II, a powerful Holy Roman Emperor of the Middle Ages, was frequently referred to as the “wonder of the world” or “stupor Mundi.” He was also known as the King of the Romans. When he was three years old, his mother Constance of Hauteville served as the regent and crowned him King of Sicily. Frederick II had high expectations for both culture and politics. He succeeded as king of Burgundy, Germany, and Italy. Through his marriage and involvement in the Sixth Crusade, he also succeeded in the throne of Jerusalem. His obstinate attempts to establish a strong, centralized Italian state frequently led to clashes with the Papacy and Italy’s major centers, sparking a protracted struggle with the Popes and other foes. He received a lot of criticism and was nearly excommunicated four times. Pope Gregory IX labeled him as the Antichrist. The arts and sciences had the strong support of Frederick II. His multilingual skills included Sicilian, Greek, Latin, Arabic, French, and German. The “House of Hohenstaufen” was put an end to when his dynasty disintegrated shortly after his passing and his heir line died out.

He was the son of Emperor Henry VI and Constance of Hauteville and was born on December 26, 1194, in Iesi, Italy. He was baptized in Assisi.

The lords of Frankfurt elected him King of the Germans while he was still a baby in 1196, but Henry VI was unable to win their support to make his son’s succession hereditary.
After the passing of his father in September 1197, the once-victorious Roman Empire experienced turmoil.
At age two, on May 17, 1198, he was crowned king of Sicily, with Constance of Hauteville serving as his regent. By sending the German advisors back and giving up Frederick’s claim to the empire and the German throne, she severed Sicily’s ties to the empire and to Germany.

The nomination of Otto of Brunswick and Philip of Swabia as competing rulers followed. Pope Innocent III was nominated by Constance to serve as both the protector of Frederick II and the regent of the Sicilian Empire, which was ruled by the papacy.

Cencio, who subsequently rose to become Pope Honorius III, served as his mentor. In the next years, Sicily experienced anarchy as local nobles, papal officials, German captains, and the cities of Pisa and Genoa engaged in fierce territorial warfare.

The unrest persisted until November 1206, when the imperial chancellor took control of Palermo and administered the nation in the name of Frederick II.

After being pronounced of age in 1208, he reclaimed control of Sicily and south Italy from local barons and adventurers by leading a band of knights he had acquired through marriage. Some of the regal domains that had become out of control when he was a minor could be reclaimed by him. He and the Pope’s relationship deteriorated during this time.

Otto of Brunswick was proclaimed the Holy Roman Emperor in 1209 by Pope Innocent III. Otto emerged as a threat to Sicily during the years 1210–11, thwarted Fredrick II’s plans, and attacked the king’s kingdom. Otto of Brunswick eventually gave up after Fredrick II was chosen as the new king by the German princes and Otto was expelled.

He crowned his one-year-old son Henry VII as King of Sicily in March 1212 and then left for Germany. Following his coronation in Mainz on December 9, 1212, he quickly conquered south Germany and was re-elected as King of Germany by the majority of the princes at Frankfurt.
He triumphed over Otto in the Battle of Bouvines in July 1214.

On July 23, 1215, in Aachen, he was anointed king after being chosen by the German princes.
He aided Philip II of France and Eudes III, Duke of Burgundy in their efforts to conclude the War of Succession in 1218. During this time, he invaded Lorraine, captured Theobald, the Duke of Lorraine, and burnt Nancy.

He was crowned the Holy Roman Emperor on November 22, 1220, by Honorius III in St. Peter’s Church in Rome, while Henry, his eldest son, held the title of King of Romans. He enacted regulations to combat heretics and gave important perks and advantages to the Italian clergy.

In spite of his commitment to Pope Innocent III to separate Sicily from the empire, he worked to solidify his regency there. He took away some of the barons’ privileges. He defeated the rebellious Saracens between the years of 1222 and 1224, and they eventually became his devoted subjects, guarding him against the papacy.

During his reign, numerous castles were built, boundaries were strengthened, harbors were expanded, a navy was established, a number of merchant ships were organized, and measures were taken to put trade under state control.

In Naples, he established the first state university in Europe in 1224, where applicants were prepared for his recently established civil service.

His relationship with the pope gradually deteriorated as a result of his failure to embark on the crusade he had promised Pope Honorius III, and it worsened when he once again claimed his regal claim to Lombardy during the Cremona Diet in 1226. He embarked on a crusade in September 1227 at Pope Gregory IX’s repeated insistence, but upon his return owing to health problems, the Pope excommunicated him.

In 1228, he eventually embarked on a crusade and signed a pact in Jaffa that gave Christians control of Jerusalem, Bethlehem, and Nazareth but retained Muslim control over the “Mosque of Omar.”
He ascended to the throne of Jerusalem in 1229. However, the pope denounced the agreement and sent a papal army to seize control of Fredrick’s regency.

He relocated with the papacy in 1230 by ratifying the “Treaty of San Germano.”
He was successful in establishing the “Liber Augustalis” code of laws in Sicily in 1231.

Henry VII was imprisoned in 1235 as a result of a quarrel between Frederick II and his son Henry VII during the battles in Germany and Italy between 1230 and 1250. His ex-communication by Pope Gregory IX, the issuance of a land piece that created a regal court, and the takeover of the majority of the Papal States came next.

He was married to Bianca Lancia for a long time, and she gave birth to Constance (Anna), Manfred, and Violante.
He had many illegitimate offspring with a number of his other mistresses.
He passed away and was interred in a sarcophagus at the Palermo Cathedral on December 13, 1250.