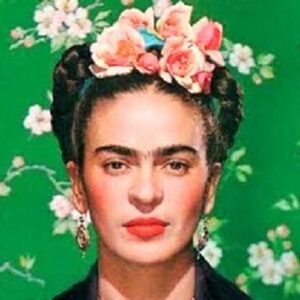 Frida Kahlo was a famous Mexican artist who was well recognized for her self-portraits. Her paintings were a symbolic method of self-expression since she mixed traditional Mexican folk art with surrealism. Kahlo, a self-taught artist, had never considered painting as a career option until she was seriously injured in a horrific accident that changed her life forever. She spent the majority of her rehabilitation time painting and eventually used it as a means of expressing her anguish and suffering. ‘Self-Portrait with Thorn Necklace and Hummingbird,’ for example, is one of her most well-known pieces. ‘Memory, the Heart,’ ‘Henry Ford Hospital,’ ‘The Broken Column,’ ‘Me and My Parrots,’ ‘Self-Portrait with Monkey,’ ‘What the Water Gave Me,’ and ‘The Dream (The Bed)’ are among the works on display. Kahlo, one of the most well-known artists of the twentieth century, had a life of chronic pain, infertility, and infirmity. Kahlo had multiple extramarital encounters and was one of the most sexually liberated women of her time, while having an unhappy marriage.

She enrolled in the ‘Escuela Nacional Preparatoria,’ one of Mexico’s top schools, in 1922. She was a child during the ‘Mexican Revolution,’ and she witnessed several acts of bloodshed and armed warfare.
Her father taught her photography in 1924, and she learnt how to use the camera and develop images. This knowledge would come in handy in her future attempts.

She was an apprentice under Fernando Fernandez, a commercial paint producer, before the bus tragedy in 1925. He taught her the fundamentals of sketching and photocopying.

She experimented with painting and tried her hand at watercolors and oil paints while recovering from injuries in 1926. She recovered the next year and became a member of the ‘Young Communist League.’

In 1930, she and her husband, Diego Rivera, relocated to San Francisco, where he had been granted a mural painting commission. She met a number of notable figures in the art world and produced a double portrait titled ‘Frieda and Diego Rivera’ (1931).

She initially showed her art to the public at the ‘Sixth Annual Exhibition of the San Francisco Society of Women Artists’ in 1931. ‘Frieda and Diego Rivera,’ a portrait of Diego Rivera and herself, was on display here.
She returned to Mexico alone in May 1931, and her husband joined her in June. She and her husband flew to New York by sea in November of that year to see his retrospective show at the ‘Museum of Modern Art.’

Four of her paintings were shown at the ‘National Autonomous University of Mexico’s’ ‘Galeria de Arte’ in 1937. Her artwork was on display for the first time in Mexico.

In 1938, she met Andre Breton, a French poet and surrealist who looked at her unfinished work ‘What the Water Gave Me.’ He dubbed it a strange piece and promised to exhibit it in Paris.
Edward G. Robinson, an art collector and actor, bought four of her works in 1938 for $200 each. This was a notable sale for her.

She moved to New York in October 1938 for her first solo exhibition, which took place at the Julien Levy Gallery. She had 25 paintings on show, and more than half of them were sold.
Her works were shown at the ‘Mexique’ exhibition in Paris, which opened in 1939 at the ‘Colle Gallery.’ The Louvre, the world’s largest museum, bought her self-portrait ‘The Frame.’

‘The Two Fridas’ and ‘The Wounded Table,’ two of her paintings, were shown in the ‘International Surrealism Exhibition,’ held at the ‘Gallery of Mexican Art,’ in 1940. Later same year, she traveled to San Francisco to participate in the ‘Palace of Fine Art’ exhibition of ‘Contemporary Mexican Painting and Graphic Art.’

Her painting was included at the ‘Institute of Contemporary Arts’ in Boston in 1941 as part of the ‘Modern Mexican Painters’ exhibition. She took part in the ‘Seminar of Mexican Culture’ the following year.
In 1942, she exhibited her ‘Self Portrait with Braid’ at the ‘Museum of Modern Art’ in New York as part of an exhibition titled ’20th Century Portraits.’

In 1947, her painting ‘Self-Portrait as a Tehuana’ was included at the ‘National Institute of Fine Arts’ in Mexico in an exhibition titled ‘Forty-Five Self-Portraits by Mexican Painters from the 18th to the 20th Centuries.’
The ‘Salon de la Plástica Mexicana’ featured her pieces ‘Diego and I’ and ‘The Love Embrace of the Universe, the Earth (Mexico), Myself, Diego, and Seor Xolotl’ in 1949.

Her solo art exhibition at Mexico’s ‘Galera Arte Contemporaneo’ took place in 1953. Despite being bedridden and ill, she attended the exhibition’s opening ceremony.

‘Self-Portrait with Thorn Necklace and Hummingbird,’ one of her essential pieces, is a self-portrait. She portrayed herself as a victim in this painting, wearing a thorn necklace. Over 25 museums in the United States have displayed it. Australia, Canada, France, and Spain have all had exhibitions of it.
‘The Broken Column,’ a metaphorical picture of her anguish and one of her most important works, was painted shortly after she underwent spine surgery. This painting is a representation of her physical and mental challenges.

She was awarded the ‘National Prize of Arts and Sciences,’ which she got from the ‘Ministry of Public Education,’ in 1946.

She was diagnosed with polio at the age of six. She was involved in an accident in 1925 that left her with a severe spinal injury, shattered ribs and pelvis, shoulder and right foot dislocations, and damage to her uterus and abdomen.
She married Diego Rivera, a Mexican painter, in 1929. The marriage, on the other hand, was not a happy one. She had affairs with both women and men because she was bisexual. In 1939, they finally divorced.
She experienced health problems her entire life and had multiple operations as a result of the fatal accident she had in 1925.
She began an extramarital affair with photographer Nickolas Muray in 1931. Their relationship lasted ten years.
Isamu Noguchi and Josephine Baker were two of the people with whom she had a close relationship. She died of lung failure on July 13, 1954, in Mexico, at the age of 47. She was bedridden and suffering from gangrene when she died.
Salma Hayek played her in the Academy Award-nominated biographical picture ‘Frida’ in 2002.

Frida Kahlo is one of the wealthiest painters and one of the most well-known. Frida Kahlo’s net worth is estimated to be $1.5 million, according to Wikipedia, Forbes, and Business Insider.

This well-known Mexican artist had a unibrow and never waxed her beard. A budding moustache and a heavy unibrow were visible in all of her self-portraits.