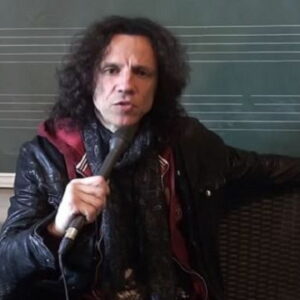 Gary Francis Caine Cherone is an American rock singer and composer who is best known as the main singer of the Boston-based rock band Extreme. He was also the lead vocalist for the band Van Halen for a brief period. His initial love as a child was athletics, and he desired to pursue a career in basketball. After a devastating knee injury dashed his hopes, he turned to his second love, music, which became his life’s guiding light. Together with guitarist Paul Geary, he founded the pop rock and metal band Adrenalin to create unique music; the group was afterward renamed the Dream. The band won an MTV unsigned band video contest. Gary has multiple successful singles to his credit as the lead vocalist of the band Extreme, which he later formed. Gary Cherone and the band rose to notoriety with the release of their self-titled debut album and Extreme II: Pornograffiti. Both albums received great acclaim for their original compositions, which included a distinctive blend of hard rock, funk, and pop tunes accompanied by outstanding guitar work. After Extreme disbanded, he joined Van Halen as the third lead singer but quickly left to establish Tribe of Judah, which was nominated for a Boston Music Award in the Outstanding New Rock Band category.

Gary Cherone and his fraternal twin Greg Cherone were born in Malden, Massachusetts, to a middle-class Catholic family on July 26, 1961. There are three brothers besides the twins.

At Malden High School, he played basketball and aspired to pursue a career in sports. His hopes, however, were dashed when he suffered a catastrophic knee injury. Then he began singing, which eventually became his passion.

Rock icons such as Roger Daltrey of The Who, Steven Tyler of Aerosmith, and Freddie Mercury of Queen influenced him.

As a youth, Gary Cherone sang in local bands. In 1979, he created the hard-rock band Adrenalin with his friend and drummer Paul Geary and guitarist Matt McKay and performed locally. In 1981, they changed the name of their band to The Dream and recorded a six-song independent EP.

Gary and The Dream were featured in a music video produced by David Hogan and broadcast on MTV’s “Basement Tapes” program. The video for ‘Mutha, Don’t Want to Go to School Today by The Dream, which included unsigned musicians, won the competition.

Gary, his friend and drummer Paul Geary, guitarist Nuno Bettencourt, and bassist Pat Badger founded the rock band Extreme in 1985; the name was a pun on “Ex-Dream.” The quartet began creating songs and performing, and by the late 1980s, they had amassed a substantial regional fan base.

In 1989, A&M Records published the band’s self-titled debut album, which sold over 300,000 copies. 1990 saw the release of the band’s second album, Extreme II: Pornograffiti, which catapulted them to popularity.

The album had a unique blend of hard rock, funk, and pop songs propelled by the outstanding guitar playing of Bettencourt. Although the album was well acclaimed in the rock community, its initial sales and chart performance were average.

Two of the album’s songs, ‘More Than Words’ and ‘Hole Hearted,’ reached the top five on the Billboard Hot 100. The response to two more singles, ‘Decadence Dance’ and ‘Get the Funk Out, was, however, only lukewarm.

Gary Cherone, along with three other members of Queen, performed “Hammer to Fall,” a 1984 song by the British rock band Queen, during The Freddie Mercury Tribute Concert at Wembley Stadium in April 1992. At the concert, Extreme also performed a medley of Queen’s greatest hits.

Extreme’s third album, ‘III Sides to Every Story,’ was released towards the end of 1992, reaching new heights of innovation. It was a follow-up to their second album and the last to feature the founding members of the band. Paul Geary quit the group after the album’s release and was replaced by Mike Mangini.

The 1995 album ‘Waiting for the Punchline’ by Extreme was only moderately successful. Extreme was officially disbanded after guitarist Nuno Bettencourt left the group following a supporting tour.

Gary Cherone was asked to audition by Van Halen, a California-based American hard rock band, in 1996. Eddie Van Halen appointed Cherone as the band’s third lead vocalist in November 1996 due to his appreciation for Cherone’s lyrics and vocals.

He spent the following year writing and producing a new studio album, Van Halen III, which debuted at No. 4 on the Billboard 200 chart upon its March 17, 1998 release. In the first week, 197,000 copies were sold, and within a few months, 500,000. Despite an accompanying tour, the record did not achieve the anticipated double-platinum level.

Van Halen began working on their second album, but Warner Bros., Van Halen’s record label at the time, rejected the album twice. Gary left the band, discouraged by the rejections.

He returned to Boston and created the band Tribe of Judah with former Extreme members Pat Badger on bass and Mike Mangini on drums. In 2001, they published an EP, and in 2002, a full-length album. Tribe of Judah featured a sound that was more industrial/electronic than Gary’s prior efforts. Additionally, the band issued a CD titled “Exit Elvis” on Spitfire Records.

Gary Cherone rejoined Extreme in 2004, and in 2007 they embarked on a world tour. In August 2008, their new album, “Saudades de Rock,” was published. It was the fifth studio album by Extreme. They published “Pornograffiti Live 25: Metal Meltdown” in 2016, which is an audio/video presentation of their 2015 event at the Hard Rock Casino in Las Vegas.

In 2007, he co-founded the band Hurtsmile with his brother Mark and Joe Pessia. In 2011, they published their self-titled debut album and toured to promote it. Prior to that, they uploaded various demos online.

The tunes included memorable guitar riffs and rapid soloing. Lyrically, the album explored themes of infancy. “Play with Me” was included in the films “Bill and Ted’s Excellent Adventure” and “Jury Duty.”

Extreme’s second album, Extreme II: Pornograffiti, was certified double platinum and published in 1990. The song ‘More Than Words’ was a massive success and topped the Billboard Hot 100 chart. Gary wrote the majority of the album’s lyrics, which were inspired by the concept of a fictional young boy named Francis and his observations of a corrupt world.

Van Halen III, the only album Cherone recorded with the rock band Van Halen, was released by Warner Bros. Records and was certified gold by the RIAA in the United States. In 2011, it sold over 700,000 copies and contained a collection of songs that deviated from conventional arena rock.

Gary Cherone is an incredibly private individual who has never discussed his romantic life with the media or his followers.