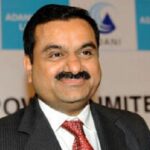 Gautam Adani is a business magnate from India who formed the Adani Group, a multinational conglomerate based in Ahmedabad. The corporation, which was founded in 1988, is now a key player in a variety of industries, including coal trading, coal mining, oil and gas exploration, ports, multimodal transportation, and power generation. He was born into a business family and inherited his forebears’ commercial aptitude, but he had no interest in the family’s textile business. As a young guy, he dropped out of school and relocated to Mumbai from Ahmedabad in order to pursue his dreams. He went into the diamond brokering business and became a millionaire in a matter of years. He returned home at his brother’s request to assist him in the operation of a small plastics plant. He finally founded Adani Enterprises, which became the Adani Group’s flagship enterprise, as an entrepreneur at heart. Initially focused on commodity export and import, the company quickly grew to include coal mining, ports, electricity generation, Agri Infrastructure, edible oil and transmission, and gas distribution, among other activities. He’s known for taking risks and basing his business strategy on excessive leverage and political favoritism. His amazing success as a first-generation entrepreneur has drawn comparisons to Dhirubhai Ambani, the founder of Reliance Industries, another Gujarati entrepreneur.

Gautam Adani was born on June 24, 1962, in Ahmedabad, Gujarat, India, to Shantilal and Shanta Adani, who came from a Bania family. He is one of seven siblings. His family worked in the textile industry.
From a young age, he was ambitious and motivated. He was uninterested in studies as a child and dropped out of high school. Later, he attended Gujarat University but could not complete his studies. He had no intention of joining his father’s textile company, despite his passion in business.

When he was 18, his business spirit drove him to leave Ahmedabad and relocate to Mumbai. The young man, who only had a few hundred rupees, was determined to make it big. He began his career as a diamond sorter at Mahindra Brothers before launching his own diamond trading firm after a few years.

His firm prospered, and by the age of 20, he had amassed a million dollar fortune. Gautam Adani’s elder brother had recently purchased a plastic plant in Ahmedabad and requested him for assistance in running it.
Adani returned to Ahmedabad and joined his brother’s company. Soon after, he began commodity trading by importing Polyvinyl Chloride (PVC), a major raw ingredient for plastic manufacture, and traveled to South Korea to make a contract for PVC imports.

He founded Adani Exports Limited in 1988. (now known as the Adani Enterprises Ltd). The corporation began by dealing in agricultural commodities and power, but as time went on, it expanded.
Adani’s business was strengthened by the 1991 liberalization and economic reforms, which resulted in increasing sales and profits. Adani was able to swiftly expand his company due to the favorable business environment.
The Gujarat government solicited private companies to administer the Mundra Port in 1993, and Adani was awarded the contract in 1995. Mundra Port & Special Economic Zone Ltd was the first to operate it, and it was eventually enlarged into Adani Ports and Special Economic Zone Limited (APSEZ). It is now the largest private multi-port operator in India.

Gautam Adani launched Adani Electricity Limited, the Adani Group’s power industry arm, in 1996. The firm is India’s largest private power generator as well as the country’s largest solar power producer.
Adani has also been a source of great debate. He has been accused of receiving special benefits from Gujarat’s then-Chief Minister, Narendra Modi, in exchange for supporting Modi’s 2014 election campaign. The allegations have been refuted by Adani.

Gautam Adani is the founder of the Adani Group, a multinational conglomerate based in India that operates in a variety of industries including logistics, agro, and energy. The Brand Trust Report 2015 named the company India’s most trusted infrastructure brand.

Through the Adani Foundation, the Adani Group is involved in a lot of philanthropic initiatives. In addition to Gujarat, the foundation works in several other states, focusing on education, sustainable livelihood options, and expanding rural infrastructure, among other things.
His wife manages the Adani Vidya Mandir in Ahmedabad, which accepts only children whose parents earn less than Rs.1 lakh per year.

The organization has a unique program for assisting fishermen, and it gives financial aid to 500 fishermen from the coastal taluka to help them purchase fishing equipment. The children of the fisherman are provided with educational opportunities.

Adani Foundation teamed with IndiaSkills, a joint venture in vocational training, and City & Guilds, one of the major providers of work-related assessment and qualifications, to open a skills training center in Gujarat in 2012.

Gautam Adani is the father of two sons, Karan Adani and Jeet Adani, and is married to Priti Adani. His wife is a dentist who serves as a Managing Trustee for the Adani Foundation.

Gautam Adani’s net worth is estimated to be $3.9 billion.