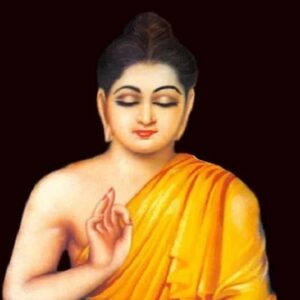 Buddhism was based on the teachings of Gautama Buddha, a spiritual leader. Between the 6th and 4th centuries B.C., he is thought to have resided in eastern India/Nepal. He was born a royal and grew up in the lap of luxury. His mother died while he was young, and his loving father did everything he could to protect his young son away from the world’s ills. Some wise professors foretold that when he was a small child, he would either become a powerful king or a well-known spiritual leader. His father wished for his kid to grow up to be a great monarch. The prince was denied all religious education and had no understanding of the ideas of old age, sickness, or death. He saw an old man, a sick person, and a corpse while riding through the city on a chariot. This new understanding of the world’s sorrows prompted other questions in the prince’s mind, and he quickly surrendered all of his material possessions in order to embark on a journey of self-discovery. He reached enlightenment after years of intense reflection and meditation, and was dubbed the ‘Buddha,’ which means ‘the awakened one’ or ‘the enlightened one.’

Gautama Buddha’s early life is steeped in mystery in several ways. He is thought to have been born in the 6th century B.C. in Lumbini (modern-day Nepal). Siddhartha Gautama was his birth name, and he was a royal. King Suddhodana was the head of a huge tribe known as the ‘Shakya,’ and Queen Maya was his mother. His mother died not long after he was born.
Wise seers predicted that Siddhartha would either become a great king or a great spiritual leader when he was a young lad. Siddhartha’s father wanted him to grow up to be a great king, so he nurtured him in luxury and kept him away from all religious knowledge.
Siddhartha’s father did not want him to learn about human trials and sufferings because he feared it might lead him to spirituality. As a result, he took great pains to ensure that his kid was nurtured in isolation and was unaware of natural processes like as aging and death.
Siddhartha, who had spent his boyhood imprisoned to his palace, became interested about the world beyond the palace and asked a charioteer to take him on a trip. He came across an old handicapped man, a sick man, a dead body, and a holy man without a house while going through the city.
These sights astounded him because he was unfamiliar with the ideas of illness, old age, death, and asceticism. The charioteer explained to him that sickness, aging, and death were all part of life, and that some individuals gave up their worldly lives to seek answers to questions about human suffering.
After seeing these sights, Siddhartha was worried. He understood that the richness of palace life no longer piqued his interest, and that he needed to discover the ultimate truth.

Siddhartha left his throne at the age of 29 to become an ascetic. He assumed that living a self-denial lifestyle would provide him with the answers he sought. He lived a life of great austerity for the following six years, consuming very little food and fasting until he got quite frail.
During this time, he attracted five followers with whom he maintained strict asceticism. Siddhartha was unable to obtain the answers he sought despite living a humble life and enduring considerable physical agony.
He received a dish of rice from a young woman after days of starvation. Following this dinner, he realized that living under severe physical restrictions was not assisting him in achieving his spiritual goals, and that living a balanced life was preferable than living a life of intense self-denial. His disciples, on the other hand, abandoned him, feeling he had abandoned his spiritual journey.
Following this, he began meditating under a fig tree (now known as the Bodhi tree) and made a vow to himself that he would not move until he reached enlightenment. For several days, he meditated and envisioned his entire life, as well as earlier lives.
He eventually found the answers to the questions he had been pursuing for so many years after meditating for 49 days. Siddhartha Gautama attained pure enlightenment, and in that instant, he became the Buddha (he who is awake).
He gained perfect knowledge into the cause of pain and the procedures required to alleviate it at the time of his enlightenment. These steps were dubbed the “Four Noble Truths” by him. According to legend, Buddha was first hesitant to share his knowledge with others because he doubted that ordinary people would understand his teachings. However, the supreme god Brahma persuaded Buddha to teach, after which he embarked on a quest to disseminate his wisdom.
He traveled to Isipatana’s deer park, where he found the five companions who had abandoned him earlier. He gave his first sermon to them and the other people who had gathered. He centered his speech on the Four Noble Truths: ‘Dukkha’ (suffering), ‘Samudaya’ (cause for suffering), ‘Nirodha’ (state of mind free from suffering), and ‘Marga’ (a state of mind free from suffering) (way to end suffering).
In his ‘Eightfold Path,’ he goes on to explain the ‘Marga,’ which he uses to stop the desires that create pain. He claims that the ‘Middle Way’ or the ‘Noble Eightfold Path’ leads to the ‘Truth.’ The route contains, among other things, Right Perspective, Right Values, Right Speech, Right Action, Right Livelihood, and Right Mindfulness. The rest of Gautama Buddha’s life was spent traveling and instructing a wide range of people, from nobility to criminals.

Gautama Buddhism was founded by Buddha. His teachings gave rise to Buddhism; he presented the ‘Four Noble Truths,’ which embody Buddhism’s core direction and give a conceptual foundation for Buddhist thought.

Siddhartha’s father planned his marriage with Yaodhar, a girl of the same age, when he was 16 years old. Rahula was born as a result of this union. When Siddhartha began his spiritual journey as an ascetic, he renounced his family.
Later on, Buddha and his father, King Suddhodana, reunited. His wife became a nun, and his son become a novice monk while he was young. Rahula lived with his father for the rest of his life.
Gautama Buddha is said to have died when he was 80 years old. He ordered his supporters not to follow any other leader at the time of his death.
In the modern world, Gautama Buddha is a powerful figure. He is the most important character in Buddhism, but he is also revered in Hinduism, the Ahmadiyya Muslim Community, and the Bahá’ religion as an incarnation of God.