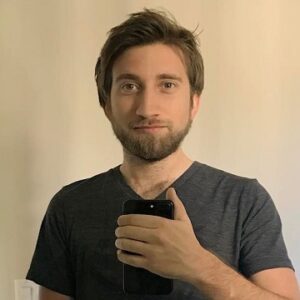 Gavin Free is a British actor, director, cinematographer, and internet personality most known for his work with the Texas-based production firm ‘Rooster Teeth.’ When ‘Rooster Teeth’ engaged him to helm the comic science fiction online television series ‘Red vs. Blue,’ he was a svelte 21-year-old. Gavin was also a former creative director for the aforementioned production company, where he worked on a variety of projects. Gavin and his friend Daniel Gruchy started a YouTube account called ‘Slow Mo Guys,’ where they launched a web video series of the same name. The channel has been a tremendous popularity, and it was named the winner of YouTube’s ‘On the Rise’ competition, which encourages up-and-coming YouTube partners. Along with Daniel, he has been cast in the ‘YouTube Rewind’ series several times. Gavin is also a well-known cinematographer who has worked on films such as ‘Snow White and the Hunstman,’ ‘Dredd,’ ‘Sherlock Holmes: ‘A Game of Shadows,’ and ‘Hot Fuzz.’ He specializes in slow motion-cinematic shooting. He earned an award for cinematography for overseeing the filming of slow-motion videos for ‘Top Gear.’ He has appeared in a number of music videos, short films, feature films, and mini-series, and his name has been suggested for a ‘Webby Award’ for ‘Best Web Personality.’

Gavin Free was born on May 23, 1988, in the civil parish of Thame, in the county of Oxfordshire, England. Lord Williams’s School in Oxfordshire was where he received his education.

He began working as a camera operator and data technician in a production firm called ‘Green Door Films’ in 2006, when he was 18 years old. Gavin improved his slow-motion camerawork and photography talents while working for ‘Green Door Films.’

Gavin also worked at the Waitrose store in Thame, a British grocery company. He made friends with Daniel Gruchy, who worked at the same superstore as him, and the two went on to start the YouTube channel ‘Slow Mo Guys.’
Gavin worked on music videos and advertisements for well-known artists such as U2, Kasabian, Klaxons, ‘Enter Shikari,’ ‘X-Press 2,’ and ‘The Chemical Brothers.’

Gavin’s first big break came in 2009, when Rooster Teeth, an American production company, hired him to direct the seventh season of their web series Red vs. Blue. He was also given the task of directing ‘Relocated,’ the miniseries adaptation of ‘Red vs. Blue.’

In 2009, he also appeared in ‘Captain Dynamic,’ a comedic miniseries produced by Rooster Teeth. Free was also cast in the ‘Rooster Teeth Shorts,’ which is still airing.

Gavin and his lifelong friend Daniel Gruchy started a YouTube channel called ‘The Slow Mo Guys’ in 2010. Both of them began filming for a web series with the same name as their YouTube channel. For filming in slow motion, Free utilised Phantom’s powerful and innovative cameras. On YouTube’s ‘On The Rise’ program, which spotlights up-and-coming YouTube partners on the site, ‘The Slow Mo Guys’ was named the best channel in 2011.

In May 2013, Gavin took over as a “lab rat” in the Rooster Teeth series “Immersion,” replacing Geoff Ramsey and Gus Sorola. Gavin, along with his colleague Michael Jones, a well-known voice actor and web celebrity, experimented with the notions of video games in real life as a “lab-rat.”

Gavin Free competed in the second season of Rooster Teeth’s gaming show, “The Gauntlet,” in 2013. He’s also appeared in the music videos for Barenaked Ladies’ songs “Odds Are” (2013) and “Did I Say That Out Loud?” (2014).
Gavin first appeared in the Rooster Teeth animated superhero comedic web series ‘X-Ray and Vav’ in November 2014, providing voicing for Vav. Free played a fictionalized version of himself in the comedy thriller series ‘Ten Little Roosters’ that same year.

Gavin Free and Burnie Burns, Rooster Teeth’s co-founder, moderated several episodes of ‘Million Dollars, But…,’ a series based on hypothetical circumstances, in 2015. In each episode, the ensemble was challenged to replicate a challenging event in an entertaining and amusing manner, with the top performer receiving a one-million-dollar prize.

Burnie Burns was replaced as Rooster Teeth’s creative director by Gavin Free in October 2015, however he quit in 2016 to spend more time to his YouTube channel, ‘The Slow Mo Guys.’

Gavin Free and his friend Daniel Gruchy started the YouTube channel ‘The Slow Mo Guys’ in 2010. The station broadcasts an eponymous web series that features a wide range of subjects shot in ultra slow motion. The channel is extremely successful, with over 9 million members and over one billion video views as of June 2017.

Gavin Free was awarded the ‘Streamy Award’ for cinematography in 2016. In the same year, he was nominated for a Webby Award for his work on The Slow Mo Guys in the category of Best Web Personality/Host (Online Film & Video).

Meg Turney, a cosplayer and blogger, is Gavin Free’s current girlfriend. They share a home in Austin, Texas.

Gavin Free’s net worth is $5 million. Gavin Free is an English filmmaker with a net worth of $5 million. He began his career working on advertising and music videos after being born on May 23, 1988 in Oxfordshire, England. Rooster Teeth Productions selected him to helm their machinima series Red vs. Blue in 2009.