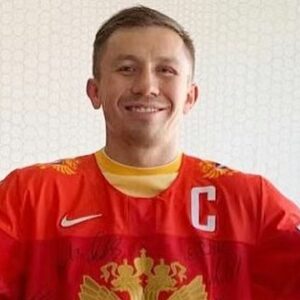 Gennady Gennadyevich Golovkin, popularly known as ‘GGG,’ ‘God of War,’ and ‘Golden Boy,’ is a professional boxer from Kazakhstan. He began as an amateur and went on to earn a gold medal in the middleweight division at the 2003 ‘World Amateur Boxing Championships.’ At the 2004 ‘Summer Olympics,’ he earned a silver medal in the same category. He turned professional in 2006 and won his first major world title in 2010 when he defeated Milton Nez to earn the WBA interim middleweight belt. He won the WBA (Regular) title later that year. He won the vacant IBO middleweight title the next year by defeating Lajuan Simon. In 2014, he became the WBA (Super) champion, which he successfully defended against Daniel Geale, as well as the IBO middleweight title. His winning streak continued, with victories over Marco Antonio Rubio in 2014 and David Lemieux in 2015, respectively, for the WBC interim middleweight title and the IBF middleweight title. When Canelo Alvarez vacated the WBC middleweight championship in 2016, he was upgraded to full champion status. When he refused to fight Serhiy Derevianchenko in 2018, he was stripped of his championship. He is known for his deft and subtle techniques, as well as his powerful punches and intelligence. He is the unified IBO middleweight champion, as well as the WBC, WBA (Super), and IBF belts. His knockout percentage of 89.7% is the best in middleweight championship history. The ‘Transnational Boxing Rankings Board’ (TBRB) and ‘The Ring’ magazine have him ranked second best middleweight fighter in the world as of December 2019, whereas ‘boxrec.com’ has him ranked first. ‘Boxrec.com’ ranks him third, but ‘The Ring,’ ESPN, and TBRB rank him seventh, seventh, and sixth, respectively, when pound for pound is taken into account.

Gennady Golovkin was born in Karaganda, Kazakh SSR, Soviet Union, on April 8, 1982. (present-day Karagandy, Kazakhstan). His Russian father worked as a coal miner, and his Korean mother worked as a lab assistant.

His older brothers, Vadim and Sergey, as well as his twin brother Maxim, have a strong bond with him. When he was eight years old, his older brothers encouraged him to try boxing.

His brothers would arrange fights for him with opponents considerably older than him when he was in kindergarten. In an interview, he went on to state that the fights were set up “every day (with) different guys.”

When Golovkin was nine years old, he joined the Soviet Army with his brothers Vadim and Sergey. His family was informed of Vadim’s death in 1990 and Sergey’s death in 1994 by the authorities.
When Victor Dmitriev initially joined a boxing gym in Maikuduk, Karaganda, he became his first boxing coach.

He was a recipient of a ‘Olympic Solidarity’ scholarship since November 2002.

At the 2003 ‘World Amateur Boxing Championships,’ he earned a gold medal by defeating Oleg Mashkin.

He went on to win a gold medal in the 2004 ‘Asian Amateur Boxing Championships’ in Puerto Princesa, Philippines, defeating Christopher Camat, and thus qualifying for the 2004 ‘Summer Olympics’ in Athens, Greece. He competed in the Olympics for Kazakhstan and won a silver medal.

He moved on to a professional career with ‘Universum Box-Promotion,’ making his debut in May 2006 after demonstrating exceptional performance in his amateur career, which he ended in 2005 with a record of 345-5.

He defeated Brazil’s John Anderson Carvalho for the vacant WBO Inter-Continental middleweight title on July 11, 2009, at the Nürburgring in Nürburg, Germany.

Golovkin’s contract with ‘Universum’ was terminated in January 2010 due to disagreements with the company.

He signed a deal with K2 and began training in Big Bear, California, under the guidance of veteran trainer Abel Sanchez.

On December 9, 2011, he retained the WBA (Regular) middleweight title by defeating US pro boxer Lajuan Simon in a battle staged at the ‘Ballsaal Interconti-Hotel’ in Düsseldorf, Germany. He also won the vacant IBO middleweight belt in the process.

On September 1, 2012, in New York City, he defeated Polish professional boxer Grzegorz Proksa in his first battle in the United States.

He was crowned the lone WBA middleweight champion in October 2012, after the WBA stripped Australian pro boxer Daniel Geale of the title when the latter sought a rematch against Anthony Mundine.

Nobuhiro Ishida, a former WBA interim super welterweight champion from Japan, suffered his first knockout loss to Golovkin on March 30, 2013, when the latter finished the fight with a strong overhand right in the third round at the ‘Salle des Étoiles’ in Monte Carlo, Monaco.

In a nail-biting contest on June 29, 2013, in Connecticut, he successfully defended both his WBA and IBO middleweight titles against British-Irish pro boxer Matthew Macklin.

His thrilling fight against American pro boxer Curtis Stevens on November 2, 2013 at New York City’s ‘Madison Square Garden’ not only saw him retain his WBA and IBO middleweight titles, but it also marked his 15th straight stoppage victory. Golovkin won the bout with a technical knockout in the eighth round. It was televised in over 100 countries and received worldwide attention.

On February 1, 2014, he defeated Ghanaian professional boxer Osumanu Adama to retain his WBA and IBO middleweight titles. He was officially promoted to the level of WBA (Super) champion by the WBA on June 3, 2014.

Golovkin was granted special permission to defend his championship against Daniel Geale. In a bout staged on July 26, 2014 at the ‘Madison Square Garden,’ Golovkin successfully defended his WBA (Super) and IBO middleweight titles against Geale, marking his 11th title defense.

On October 18, 2014, he fought at the ‘StubHub Center’ in Carson, California, against Marco Antonio Rubio, the then-Interim WBC champion. It was his first fight on the West Coast. He won the WBC interim middleweight title as well as the WBA (Super) and IBO middleweight belts.

He successfully defended his title for the 13th time in a row against British pro boxer Martin Murray on February 21, 2015 at the ‘Salle des Etoiles’ in Monte Carlo.

He won his 21st bout in a row by knockout against Lemieux. He also broke Monzón’s record with this fight, as he now has 15 consecutive middleweight title defenses under his belt.

On April 23, 2016, he fought Dominic Wade, a professional boxer from the United States, at ‘The Forum’ in Inglewood, California. He overcame Wade, who had been unbeaten until to that point, and successfully defended his interim middleweight belts from the WBA (Super), IBF, IBO, and WBC.

On September 10, 2016, he added another feather to his crown by successfully defending his WBC, IBF, and IBO middleweight belts in a thrilling battle against British unbeaten IBF welterweight champion Kell Brook at ‘The O2 Arena’ in London, UK.

On September 16, 2017, Golovkin battled Mexican boxer Canelo lvarez in front of a sellout crowd. At the end of 12 rounds, the ‘classic’ bout finished in a split decision draw. This was Golovkin’s first draw in his career.

After a contentious draw with lvarez in September 2017, a rematch was inevitable. Golovkin’s IBF championships were withdrawn from him on June 6, 2018, after he failed to follow some of the rules and refused to fight Ukrainian boxer Serhiy Derevianchenko.

He fought lvarez again on September 15, 2018, in front of a sellout crowd at ‘T-Mobile Arena’ in Paradise, Nevada. The battle lasted 12 rounds, with the judges siding with lvarez and declaring him the winner, a decision that was widely panned by spectators and the media. He was stripped of his WBA (Super), WBC, and IBO middleweight titles.

He is married to Alina, with whom he shares a son named Vadim. They also have a daughter, who was born just days before lvarez’s fight.

He migrated from his country to Stuttgart, Germany, in 2006, and then to Santa Monica, California, in 2014, where he now lives with his family.

He can also communicate in three other languages: Russian, English, and German, in addition to Kazakh.