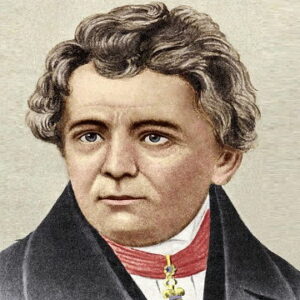 Georg Simon Ohm was a German physicist and mathematician. He is best known for coming up with Ohm’s Law, which says how electrical resistance, electric force, and electric current are related. This was an important scientific discovery because it marked the real start of the study of electrical circuits. It’s interesting to note that Ohm wasn’t the only scientist trying to figure out this connection. Before Ohm, there were a lot of other researchers who tried to find the link but failed. Ohm proved his theory with philosophical arguments and experiments that showed it to be true. Just like other scientists, Ohm’s idea was turned down, but he didn’t let it get him down. His strong will helped support his research, which was later not only accepted but also made a law in physics. Read the next few lines to find out more about this clever scientist.

Georg Simon Ohm was born to Johann Wolfgang Ohm and Maria Elizabeth Beck, who were both Protestants. His mother was the daughter of a tailor, while his father was a locksmith. Even though neither of his parents had a formal education, his father taught himself.

Johann didn’t just learn for himself; he also taught his own children what he had learned. Ohm had a younger brother named Martin, who went on to become a famous mathematician, and an older sister named Elizabeth Barbara.

Georg and his brother Martin taught themselves so much about math, physics, chemistry, and philosophy that Georg’s formal education seemed pointless and boring. Georg started school at Erlangen Gymnasium when he was eleven years old. He stayed there until he was fifteen years old.

But, as was said above, this part of learning wasn’t very interesting because all the education center focused on was learning by rote and figuring out what texts meant. Karl Christian von Langsdorf, a professor at the University of Erlangen, said that the two brothers were so smart that they were like the Bernoulli family.

Georg Ohm went to school at the University of Erlangen in 1805. However, instead of concentrating on his studies, Ohm dribbled away his time on extracurricular activities. Johann sent Georg Ohm to Switzerland in 1806 because he saw that his son was wasting his time and missing out on the chance to learn.

In that book, Georg got a job teaching math at a school in Gottstadt bei Nydau. Karl Christian von Langsdorf moved from the University of Erlangen to the University of Heidelberg in 1809. Ohm wanted to join him, but Langsdorf told him to read the works of Euler, Laplace, and Lacroix instead.

For the same reason, Ohm quit his job as a teacher in Gottstadt bei Nydau in March 1809 and moved to Neuchatel to work as a private tutor. During his free time, he kept learning about math on his own. This went on for two years, until 1811 when Ohm went back to the University of Erlangen.

Work as a teacher

Georg Ohm did so well with his own studies that they helped him get ready for his doctorate degree. On October 25, 1811, Ohm got his Ph.D. from the University of Erlangen. Right after that, he got a job as a lecturer in the math department. But this didn’t last long because Ohm quit his job three months later because there wasn’t much room for growth.

Ohm was poor, so the small salary he got from the university didn’t do much to help him out of his sad situation. The Bavarian government gave Ohm a job teaching math and physics in Bamberg in 1813. But Georg was still not happy with this, so he started writing an elementary textbook on geometry to use his skills.

In 1816, the school where Ohm taught was closed down, and he was sent to Bamberg to teach math at a school that was already too full.

In September 1817, the next year, Ohm was offered a job as a math and physics teacher at the Jesuit Gymnasium of Cologne. The chance was great because not only was the school better than any other one Ohm had taught at, but it also had a good lab. Ohm was a teacher for many years, but he didn’t stop studying on his own.

He kept reading math books by French mathematicians like Lagrange, Legendre, Laplace, Biot, and Poisson. Later, Ohm also read the works of Fresnel and Fourier. After learning about Oersted’s discovery of electromagnetism in 1820, Ohm began his own experiments in the school’s physics lab at the same time.

These experiments that Ohm undertook were only a measure to uplift his educational standard. Ohm also realized that if he wanted a job that really inspired him, he had to work on research publications. That was the only way he could prove himself to the world and have something solid to ask for a job in a more stimulating environment.

Ohm wrote a paper in 1825 that talked about how the electromagnetic force made by a wire decreases as the length of the wire grows. The paper was based only on the results of Ohm’s tests and trials, which he had mapped out. Later that same year, Ohm presented two more papers in which he used Fourier’s study of heat conduction to explain conduction in circuits using math.

Ohm’s second paper was especially important because it had laws that explained the results of other people’s work on galvanic electricity. It is also seen as an important paper because it led to what we now call Ohm’s law, which was published in a book the next year.

Ohm’s famous book, Die to galvanize Kette, mathematically worked out, came out in 1827. In it, he explained the theory of electricity in great detail. What’s interesting about the book is that Ohm didn’t just start talking about the subject right away. Instead, he gave the math background that was needed to understand the rest of the work.

This was important because even the smartest and most educated German physicists needed an introduction to the book because it didn’t use math to explain physics, which was unheard of at the time. Ohm’s theory said that electricity could be transferred between “contiguous particles.” In addition, the paper showed how Ohm’s approach to science was different from that of Fourier and Navier.

Later Years: The Jesuit Gymnasium of Cologne gave Ohm a year off at half pay to work on his research in 1826. He had to go back to work in September 1827. During the year he spent on vacation in Berlin, Ohm was sure that his book would get him a better job at a well-known university.

However, this did not happen, so Ohm reluctantly went back to work at the Jesuit Gymnasium in Cologne. Even worse was the fact that, even though Ohm’s work had a big impact, it was met with almost no enthusiasm. This hurt him a lot, so he decided to move to Berlin.

Because of this, Ohm officially quit his job in March 1828 and found a temporary job teaching math in Berlin schools. In 1833, Ohm took a job as a professor at the University of Nuremberg. Even though this gave him the title he had always wanted, he was still not happy. Ohm worked hard and kept going until 1842 when the Royal Society gave him the Copley Medal for his work.

The next year, he was chosen to be a member of the Royal Society from outside the UK. Ohm joined the Bavarian Academy as a full member in 1845. Four years later, he moved to Munich and got a job as the curator of the physics cabinet at the Bavarian Academy.

Georg Ohm died in Munich, Germany, in the year 1854. He was buried in the Old South Cemetery. We don’t know a lot about what killed Georg Ohm. Ohm’s Law, which is about electricity, uses his name as part of its language. The SI unit for resistance, the ohm (symbol ), is also named after this brilliant physicist.

Georg is one of the wealthiest and most well-known physicists. Based on what we found on Wikipedia, Forbes, and Business Insider, Georg Ohm has a net worth of about $1.5 million.