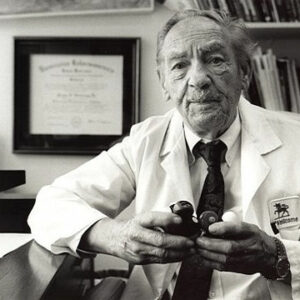 George H. Hitchings was an American doctor who shared the Nobel Prize in Physiology or Medicine in 1988 with two other co-recipients. His medical research was well-known, particularly his revolutionary work on chemotherapy. His contributions paved the path for the development of life-saving medications to treat diseases such as leukemia, gout, and immune system abnormalities. He was born into a loving family in Washington and had a pleasant childhood until his father was diagnosed with an incurable sickness. He died when George was only 12 years old, after a hard battle for his life. The young boy’s father’s illness and sudden death had a great impression on him, and he decided to become a doctor when he grew up. In 1923, as a premedical student at the University of Washington, he was intelligent and determined. He found the university’s intellectual environment to be quite interesting, and he graduated with a degree in chemistry. He went on to Harvard University to get his PhD after finishing his master’s degree. Years later, while working for Wellcome Research Laboratories, he met Gertrude Elion and the two began researching on malaria, leukemia, gout, organ transplantation, and bacterial infections pharmacological therapy. The Nobel Prize in Physiology or Medicine was awarded to the pair in 1988 for their outstanding achievement.

His parents were both voracious readers, a quality he inherited as well. George had a nice life until his father became unwell and died at the age of 12 after a protracted illness. George’s interest in medical study was sparked by this traumatic childhood experience.

He did well in school, graduating salutatorian from Seattle’s Franklin High School in 1923 and enrolling at the University of Washington as a premedical student. In 1927, he earned a bachelor’s degree in chemistry and spent the summer at the Puget Sound Biological Station in Friday Harbor, Washington.

With a thesis based on his studies at the Puget Sound Biological Station, he received his master’s degree in 1928.
He was then given fellowships at the Mayo Foundation and Harvard for further graduate work, and he chose the latter. He was accepted as a Teaching Fellow in the Department of Biological Chemistry at Harvard Medical School after spending a year as a Teaching Fellow at the Department of Chemistry at Cambridge. In 1933, he received his Ph.D.

A Career of George H. Hitchings

the midst of the Great Depression, he began his career. He struggled in the early years of his career since he couldn’t find a secure, well-paying job. He worked on cancer research at Harvard’s C.P. Huntington Laboratories, nutrition research at Harvard School of Public Health, and Western Reserve University on a temporary basis.

The year 1942 marks the official start of his successful career. He became the head of the Biochemistry Department of the Wellcome Research Laboratories in Tuckahoe, New York. This position gave him a lot of leeway in terms of developing his own research agenda.

In 1944, Gertrude Elion, his future collaborator, joined him. Hitchings, along with Elion and other members of his team, began conducting medicinal research, producing chemicals for specific disorders, and putting them to the test on animals. Their research yielded new insights into a range of immune-related disorders.

In the mid-1940s, Hitchings’ team began working on a significant antiviral study with Randall L. Thompson at Western Reserve University. The researchers concentrated on the vaccinia virus, which shed information on the mechanism of effective viral infection curative chemotherapy.

His team worked on two significant drugs: 2, 6-diaminopurine (a leukemia treatment) and p-chlorophenoxy-2, 4-diaminopyrimidine (a folic acid antagonist).
Hitchings’ team became affiliated with the Sloan Kettering Institute in the late 1940s, which gave financial assistance to the team in their hunt for antitumor agents.

Hitchings joined Burroughs Wellcome as Vice President in Charge of Research in 1967. From 1970 until 1985, he was an Adjunct Professor of Pharmacology and Experimental Medicine at Duke University. He was named Scientist Emeritus at Burroughs Wellcome Company in 1976.

In the field of chemotherapy, George H. Hitchings was a pioneer. He focused on the vaccinia virus with his team and developed several active chemicals that cleared the way for the development of effective curative treatment that would slow the spread of cancer cells in the body.

He was passionate about philanthropy and served as the Director and President of the Burroughs Wellcome Fund from 1968 to 1971. The Fund is a non-profit organization dedicated to funding biomedical research, particularly in clinical pharmacology and novel drug design methodologies.

In 1983, he formed the Greater Triangle Community Foundation and served as its director for the rest of his life.

For his contributions to medical science, he received the Gairdner Foundation International Award in 1968.
In 1969, the Passano Foundation presented Hitchings with the Passano Award.
The Nobel Prize in Physiology or Medicine was awarded to George H. Hitchings, Sir James W. Black, and Gertrude B. Elion in 1988 “for their discoveries of key principles for pharmacological treatment.”

He married Beverly Reimer, a talented and intellectual young woman, in 1933. They had two children together. After more than 50 years of marriage, his wife died in 1985. Joyce Shaver was his second marriage.
In his latter years, he developed Alzheimer’s disease and died on February 27, 1998.

George H. Hitchings is reported to have a net worth of is $2 million dollars. He has amassed enormous money as a result of his primary profession as a doctor.