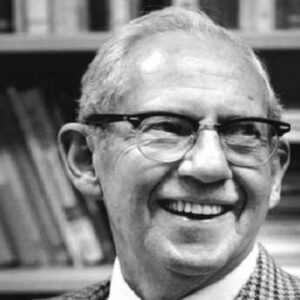 George Joseph Stigler was a well-known economist in the United States. In 1982, he was awarded the Nobel Memorial Prize in Economics “for his foundational studies of industrial architecture, market functioning, and the causes and effects of government regulation.” He was a significant figure in the Chicago School of Economics, alongside Milton Friedman. He was a hardworking student who earned his bachelor’s degree from the University of Washington in 1931. He went on to Northwestern University for his MBA and the University of Chicago for his Ph.D. in economics. He then went on to teach at Iowa State College, the University of Minnesota, Brown University, Columbia University, and the University of Chicago, among others. He founded the Center for the Study of the Economy and the State in Chicago, which was later renamed The Stigler Center following his death. He was not just a talented economist, but also a gifted teacher who motivated his pupils and instilled in them a respect for economics as a discipline that solves real-world issues. His list of contributions was so extensive that it had a long-term impact on economic philosophy, industrial organization, and industrial regulation, two fields he helped to develop. It’s no surprise that his achievements were recognized by the Nobel Committee, who praised his precise and straightforward thinking approach. He also wrote a number of books and essays that are regarded pioneering in the field of economics.

George Joseph Stigler was born on January 17, 1911, in Renton, Washington, a suburb of Seattle. He was the only son of Elizabeth and Joseph Stigler, who had immigrated to the United States at the turn of the century. Elizabeth was from Austria-Hungary, whereas Joseph was from Bavaria.

His father worked as a brewer at one time. After that, he took a variety of odd jobs before deciding to pursue a career in real estate. As a result, the Stigler family, along with young George, moved about a lot. Despite the repeated residence moves, the family lived in relative comfort.

In 1933, he enrolled at the University of Chicago, where he earned his PhD in 1938 under Professor Frank H. Knight. His thesis examined the history of neoclassical production and distribution theories from 1870 to 1915 as a key link in the economic thought chain.

Three excellent economists, Jacob Viner, Henry Simons, and his professor Knight, inspired him immensely during his research career at the University of Chicago. Fellow students W. Allen Wallis and Milton Friedman inspired him as well.

Stigler began his teaching career at Iowa State College in 1936, where he stayed for the next two years. By that time, he had begun researching in the field of price theory and had begun to publish his findings.

In 1938, he began his career at the University of Minnesota, where he also worked for the National Bureau of Economic Research, before moving on to Columbia University’s Statistical Research Group, which was led by Allen Wallis.

By the late 1930s, World Military II had begun, and these organizations were engaged in war research for the armed forces.

Following a brief hiatus during the war, he returned to the University of Minnesota in 1945. He also began his experiential work in price theory in the 1940s. In 1946, he wrote ‘The Cost of Subsistence,’ an early study on linear programming.

He also transferred to Brown University in 1946, and then to Columbia University a year later, where he remained from 1947 to 1958. He proposed the survivor technique of determining the competent sizes of firms in the 1950s, and worked on delivered price systems, vertical integration, and other related topics.

He was also a Fellow at Stanford’s Center for Advanced Study in Behavioural Sciences from 1957 to 1958. He was named a Fellow of the American Statistical Association in 1963.

He came to the University of Chicago in 1958, and over two decades later, in 1977, he founded the Center for the Study of the Economy and the State there. In his memory, it was renamed The Stigler Center after his death.

He purposefully avoided administrative duties at his workplaces in order to focus on his subject and research issues. He was a Fellow at Stanford’s Hoover Institution from 1971 to 1991.

He was also a member of the Attorney General’s National Committee to Study Antitrust Laws in 1954-55, Chairman of the Federal Price Statistics Review Committee in 1960-61, Vice-Chairman of the Securities Investor Protection Corporation in 1970-73, and Co-Chairman of the Blue Ribbon Telecommunications Task Force and of the Illinois Commerce Commission in 1990-91.

George Joseph Stigler is most known for inventing ‘The Hypothesis of Economic Regulation,’ in which he supported his ‘capture theory’ with facts. According to the notion, interest groups use the government’s authoritarian powers to draft laws and policies that benefit them. To put it another way, governments don’t create monopolies in businesses by accident. In economics, he made this an acceptable mainstream perspective.

In his seminal article ‘The Economics of Information,’ he mentioned yet another of his significant contributions to economics. He stressed the value of information in this work and established a new field of research for economists.

In addition, he conducted extensive research into the history of economic philosophy.
In his article “Information in the Labor Market,” published in 1962, he proposed the theory of search unemployment. It also established the parameters for future unemployment research.

Stigler was elected President of the American Economic Association in 1964 and the History of Economics Society in 1977.
He was inducted into the National Academy of Sciences in 1975. He was a founding member and President of the

Mont Pelerin Society (an international association of economists) from 1976 to 1978.
In 1982, he was awarded the Nobel Memorial Prize in Economics “for his foundational studies of industrial architecture, market functioning, and the causes and effects of government regulation.”
Ronald Reagan awarded him the National Medal of Science in 1987.

Margaret L. Mack, Stigler’s wife, met him at the University of Chicago. Stephen (a statistician), David (a lawyer), and Joseph, the couple’s three sons, were born in 1936. (a social worker). Margaret, his first wife, died tragically young in 1970, and he never married again.

George Joseph has net worth is $5 million.

After him, the ‘Stigler Diet’ was created.
He was a voracious reader and avid book collector.