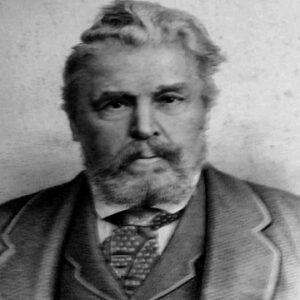 George Augustus Moore was an Irish writer, poet, and dramatist who is acknowledged with being the primary influence on naturalism in late-nineteenth-century English and Irish literature. He was a versatile writer who brazenly defied Victorian traditions by writing about difficult issues such as sex, adultery, prostitution, homosexuality, and so on. Moore intended to be a painter when he was younger, but his passion later shifted to literature. With ‘The Flowers of Passion,’ a collection of lyrical poetry, he began his writing career as a poet. However, after some critics panned the book, he was forced to remove it from circulation libraries because the poems’ content would offend moral puritans. His first work, ‘A Modern Lover,’ was a realistic portrayal of a painter’s affairs and love life. The novel garnered great reviews, but its subject matter sparked a lot of debate. Undaunted, he went on to write another novel, ‘A Mummer’s Wife,’ which dealt with the subject of extramarital affairs and adultery. This book was likewise chastised for its graphic nature, causing Moore to speak out against the circulating libraries’ prudish censorship. Moore was the greatest influence on James Joyce, the famed poet and novelist.

Mary Blake and her politician husband, George Henry Moore, who was also a founder of the Catholic Defense Association, gave birth to George Moore. As a child, he enjoyed reading and going on adventures with his brother and friends.

To get a formal education, his father enrolled him at St. Mary’s College, a catholic boarding school. However, he was dissatisfied with the school and instead of concentrating on his studies, he spent his time reading novels and poems. In 1867, he was expelled from school due to his laziness.

Due to his father’s employment, the family moved to London in 1868, and he was sent to the South Kensington Museum’s School of Art. His performance there was similarly dismal, and his father was extremely disappointed in him.

When his father died in 1870, he inherited his father’s large estate. He moved for Paris to study painting after handing over the estate to his brother in 1873.

He moved to Paris at the age of 21 to study art at Academie Jullian. He met several famous painters and writers in Paris, including Degas, Renoir, Pissarro, Mallarme, and Emile Zola.
Gradually, his focus switched from art to writing, and in 1877, he published his first collection of poems, ‘The Flowers of Passion.’

In 1879, he was compelled to return to England due to financial difficulties at home.
The contribution of French writer Emile Zola to the literary movement of naturalism affected George Moore as a young man, and he incorporated naturalism into his debut novel, ‘A Modern Lover,’ published in 1883.
‘A Mummer’s Wife,’ his second novel, was published in 1885, followed by ‘A Drama in Muslin,’ 1886, and ‘A Mere Accident,’ 1887.

He was a fearless writer who candidly addressed themes such as sexuality, adultery, extramarital affairs, and homosexuality. His work was initially treated with harsh criticism, but with time, people developed a taste for realism, and his works became popular.

He also published poetry and novels, as well as several magazine pieces on literature and art.
‘The Confessions of a Young Man,’ his memoir, was first published in French in 1886 and then in English in 1888. It chronicled his adventures in Paris as a young artist and writer.
‘Esther Waters,’ his most famous novel, was published in 1894. It was an instant hit because it centred around the life of a young unwed mother. He gained notoriety and financial security as a result of the book.

In 1901, he came to Ireland and collaborated with W.B.Yeats to build the Irish National Theatre. ‘Diarmuid and Grania,’ a lyrical play written by Moore and Yeats, was produced by the theatre. Moore’s drama ‘The Strike at Arlingford,’ which he wrote in 1893, was also performed in the theatre.

‘The Confessions of a Young Man,’ his memoir, is regarded as one of his most notable works for its realistic portrayal of life in Paris during the 1870s and 1880s. Moore discussed the emergence of impressionism in France and provided insightful literary critique of a variety of authors.

His most famous work, ‘Esther Waters,’ was released in 1894. The story follows a poor, unwed mother as she tries to raise her child through numerous societal barriers and problems. The novel was a huge hit, and it was widely regarded as his best work.

The estimated net worth of George Moore is unknown.

Moore never married, but he did have a relationship with Lady Cunard’s daughter, Maud. Moore is said to be the father of her daughter, Nancy, albeit there is no verifiable evidence to support this allegation.
In his latter years, he suffered from kidney difficulties and died at the age of 80 in 1933.

He was raised as a Catholic, but due to a family feud, he converted to Protestantism.
His father was concerned that he would grow up to be a failure because of his poor academic performance.
He died a wealthy man, but his brothers and their families were left with nothing.