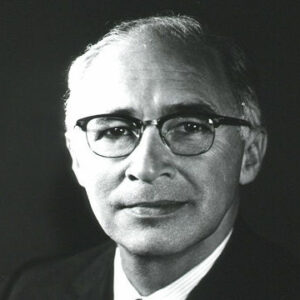 George Wald was an American scientist who shared the 1967 Nobel Prize in Physiology or Medicine with Haldan Keffer Hartline and Ragnar Granit for his work on the physiological and chemical processes of seeing in the eye. Wald spent his whole life studying how the eye sees and sends pictures to the brain. People in the scientific community and other researchers gave him high marks for his work with pigments in the retina. He used chemical methods to get pigments out of the retina and then measured how much light the pigments could absorb. Wald had a steady academic career in addition to the scientific discoveries and research he did. He started out as a tutor at Harvard and worked his way up to Faculty Instructor, Associate Professor, and finally Professor of Biology. During his life, Wald got a lot of awards and honors for his research from different places around the world. He was also a member of many scientific organizations.

George Wald was born in New York City on November 18, 1906. His parents were Isaac Wald and Ernestine Rosenmann Wald. His parents came to America from Israel.
Young Wald went to schools in Brooklyn for his elementary and middle school years. He then went to New York’s Brooklyn Technical High School and graduated in 1922.

Wald was accepted to New York University’s Washington Square College. In 1927, he got his Bachelor of Science degree. Wald went to Columbia University and got a Ph.D. in zoology in 1932. Wald was a student and research assistant for Professor Selig Hecht while he was getting his Ph.D.

When George Wald finished his Ph.D., the US National Research Council gave him money to travel. He took full advantage of the chance and went to Germany to work for Otto Heinrich Warburg.

Together with Warburg, Wald found out that the retina has vitamin A. At the same time, scientist Paul Karrer in Zurich, Switzerland, had just found vitamin A on its own. Wald went to Zurich so that he could finish the identification at Karrer’s lab.

Wald moved to Harvard University in 1934 and got a job as a tutor in Biochemical Sciences there. From 1935 to 1948, he was a Biology instructor and tutor. From 1939 to 1944, he was a Faculty Instructor, and from 1944 to 1948, he was an Associate Professor. From 1948 on, he was a Professor of Biology. During the summer term of 1956, Wald taught Biochemistry at the University of California as a guest professor.

Wald did research at Harvard University that showed how vitamin A helped people see better. He also looked at how cells in the retina see color, black and white, and pass images to the brain.

Wald found out that Vitamin A is a part of the retina through his research and experiments. He also showed that when the pigment rhodopsin was exposed to light, it made the protein opsin and a compound with vitamin A in it. This showed that vitamin A was important for how the retina worked.

During the 1950s, Wald and his colleagues used chemical methods to take pigments out of the retina. He used a spectrophotometer to measure how much light the pigments took in. Since the wavelengths that best turned on photoreceptor cells were the ones that were absorbed by retinal pigments, this experiment showed the wavelengths that the eye could best see.

Wald and his colleagues did most of their early research by measuring the absorbance of rhodopsin, which was the main photopigment in rods. Wald didn’t measure the absorbance directly from cells, rather than from an extract of the pigments, until much later.

He did this by using a method called microspectrophotometry. This helped him figure out how much pigment the cone cells could take in.

When Wald left Harvard in 1977, he gave talks and traveled a lot to promote peace and human rights. He went to Iran in 1980, even though he wasn’t supposed to. This was during the hostage crisis.

In 1986, he was asked to fly to Moscow with other Nobel laureates to talk to Mikhail Gorbachev about environmental issues. When Wald met Gorbachev, he asked him without fear about the arrest, detention, and exile of Yelena Bonner and her husband, Andrei Sakharov, who was also a Nobel Prize winner.

Even though Gorbachev didn’t know about it, he took action almost right away by letting Bonner and Sakharov go in December 1986.

George Wald is well-known for his work on how the eye works. His research showed how vitamin A helped people see better and how cells in the retina saw colors and sent pictures to the brain. Through his experiments, he found out that the retina has vitamin A in it.

It was made by putting the pigment rhodopsin and the protein opsin in the light. In this way, he showed that vitamin A is important for the function of the retina.

In 1967, George Wald, Ragnar Granit, and Haldan Keffer Hartline shared the Nobel Prize in Physiology or Medicine “for their discoveries about the basic physical and chemical processes of vision in the eye.”

In 1955, the Association for Research in Ophthalmology gave him the Proctor Medal for his work. In 1959, the American Academy of Arts and Sciences gave him the Rumford Medal.

In 1966, the Optical Society of America gave him the Ives Medal. In 1967, he and his wife Ruth both got the Paul Karrer Medal from the University of Zurich.

In 1931, Wald got married to Frances Kingsley. Wald had two sons, Michael and David, with his wife Frances. They got a divorce after they were married.

In 1958, he married Ruth Hubbard. Hubbard gave him a son, the musicologist and musician Elijah Wald, and a daughter, the well-known family law attorney Deborah.
He died in Cambridge, Massachusetts, on April 12, 1997.