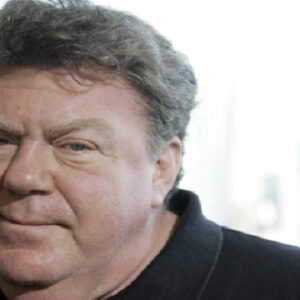 American actor George Robert Wendt gained notoriety for his role as “Norm Peterson” in the television series “Cheers.” Because of how well-known his on-screen persona grew, he frequently appeared as “Norm” in crossover episodes. He appeared frequently in the program and did so all the way to the end. In the 1970s, George began his career as a theater performer before making his way into motion pictures. His acting career began with “My Bodyguard.” A year later, he made his first known TV appearance in ‘Taxi.’ Before landing his breakout role in “Cheers,” he made more TV appearances in “Soap” and “M A S H.” George has also appeared on “Saturday Night Live” numerous times; his first appearance was during season eleven of the program. Through programs like “Whose Line Is It Anyway,” “Columbo,” “Sienfeld,” “The Simpsons,” “Family Guy,” “Modern Men,” “Hot in Cleveland,” “Potlandia,” and “Clipped,” he left his mark on television. In the web series “Verdene and Gleneda,” he presently plays the lead role.

He attended Campion High School in Wisconsin for his official schooling. He enrolled in the “University of Notre Dame,” but after failing all of his classes in the first semester, he was quickly expelled.
After that, he went to Kansas City, Missouri’s “Rockhurst College,” where he graduated with a bachelor’s in economics.

He first considered a career in acting while he was employed by his father’s real estate company. He joined the cast of “The Second City” in 1975 and finally rose to the position of main stage cast.

He made his on-screen debut in the 1978 movie “A Wedding.” But no one acknowledged his contribution. His debut film with credit is the 1980 picture “My Bodyguard.”

The career of George Wendt

Wendt played the role of “Norm Peterson” in the television sitcom “Cheers” in 1982. His persona, along with the play, became a success. The Boston-based bar featured in the show was where a bunch of folks got together and socialized. “Cheers” was shown from 1982 to 1993.

Wendt performed numerous crossover episodes in various TV shows like “The Simpsons,” “St. Elsewhere,” “The Tortellis,” “Family Guy,” and “Frasier” due to the popularity of his character.

He received six “Emmy Award” nominations for “Outstanding Supporting Actor in a Comedy Series” because of his performance in “Cheers.” Wendt continued to appear in every season of the program.

In 1985, Wendt had the chance to make an appearance on “Saturday Night Live” while he was a leading man in “Cheers.” He frequently appeared on “SNL” in the 1990s as “Bob Swerski,” a Chicago Superfan.

Wendt had his own show called “The George Wendt Show” after “Cheers” ended in 1993. In this show, he played a mechanic for a radio program. The program resembled the radio program “Car Talk.” Since his show didn’t last very long, Wendt moved on to consider other possibilities. He played the lead in the movie “Man of the House” in 1994.
He appeared in the 1999 movie “Outside Province” as Joey, a homosexual character. He also made an appearance in Michael Jackson’s “Black & White” music video.

Wendt began to concentrate more on Broadway in 2010 and performed as Santa in “Elf the Musical.” In a Winnipeg, Manitoba performance of “Hairspray,” he played “Edna Turnblad” once more.

Additionally, he had appearances in various series, including “The Ghost Whisperer” and “Cubed.” He appeared as a guest star as “Yoder” in the 2011 television series “Hot in Cleveland,” which was based on his “Cheers” persona.

He briefly appeared on “Portlandia” in 2013 as a news reporter. He also had an appearance in the Harry’s Law TV series. Wendt and his wife co-starred in the same year’s popular play “Never Too Late.” He portrayed the owner of a lumber yard whose life becomes chaotic when his wife returns from a doctor’s appointment with news that will change everything.

He co-starred with Emilia Clarke and Cory Michael Smith in the stage version of “Breakfast at Tiffany’s.” He made an appearance on the TV program “Clipped” in 2015.

In Overland Park, Kansas, at the “New Theatre Restaurant,” he played the lead in the play “The Fabulous Lipitones” in 2017. In the same year, he appeared as “Willy Loman” in another production of “Death of a Salesman” in Ontario, Canada.

In the web series “Verdene and Glenada,” he presently plays the lead role.

Wendt married Bernadette Birkett in 1978 after meeting her at “Second City.” Together, they are parents to three kids.

The third season of “Cheers” featured his wife as Cliff’s date. In the series, she also provided the voice of “Norm’s” wife, “Vera.”

An American actor and comedian named George Wendt has a net worth of $25 million. The television sitcom “Cheers,” in which George Wendt starred as Norm Peterson, is his most well-known work. He received a lot of praise for this portrayal and was nominated for Outstanding Supporting Actor in a Comedy Series at the Emmys six times in a row. Wendt has acted in movies like “Fletch,” “Gung Ho,” “Dreamscape,” “House,” “Forever Young,” “Hostage for a Day,” “Man of the House,” and “Lakeboat” in addition to her television roles.