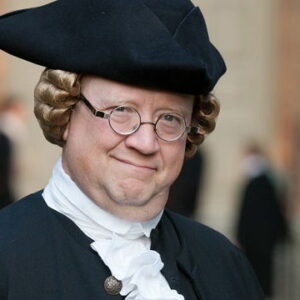 George Wythe was a well-known lawyer, teacher, and judge. He represented Virginia in the Continental Congress and signed the Declaration of Independence in 1776. He had a good education, and his peers respected him for being smart, funny, and having strong morals. Soon after he finished studying law, he started working for the government. He was one of the most vocal opponents of the Stamp Act of 1765, which put a direct tax on the colonies of British America. He wrote a letter to the parliament criticizing the Act. This made him a well-known politician, and the people of Williamsburg chose him to be their mayor. As a burgess at The College of William and Mary, he met Professor William Small, who suggested that he be a mentor to young law student Thomas Jefferson. As a professor, he also taught and helped John Marshall, who later became Chief Justice of the United States. In addition to talking about legal issues, he also talked about history, philosophy, and languages with other well-known people like Francis Fauquier and Norborne Berkeley. When the first law school in independent America opened, he was the first professor there. He taught many students who later became famous, like James Monroe and Henry Clay.

He was the child of Thomas Wythe III and Margaret Walker, who were married. George was only three years old when his father died, so his mother raised him.

His mother went to college and came from a family of Quakers. She taught her son how to speak Greek and Latin at home. She taught him to love and respect everyone, and she helped him become interested in many things.

He went to the Grammar School at William and Mary when he was 14 years old. When he was 16, he went to study law with his uncle Stephen Dewey. After two years, he went to school by himself.

He took the bar exam when he was only 20 years old, in 1746. He passed the test, got his license to work, and was allowed to join the bar in 1746 in Elizabeth City County.

He moved to Spotsylvania County, where he met Zachary Lewis, who was the King’s attorney and taught him how to be a good lawyer. He got married to his daughter Ann, but she died just eight months after the wedding. Brokenhearted, he went back to Williamsburg.

When he went back to Williamsburg in 1748, he worked with Zachary Lewis’s cousin Benjamin Waller, who was also a lawyer.
In 1748, the House of Burgesses put him in charge of two important committees: Privileges and Elections and Proposals and Grievances. He also kept doing his job as a lawyer.

In 1754, he was put in charge of the King’s case for a short time. A few months later, he was chosen to fill the spot left by Armistead Burwell’s death as burgess of Williamsburg.

The Stamp Act was passed by the British Parliament in 1765. It put a direct tax on the colonies of British America. He was very against the Act, and he wrote a letter to parliament criticizing it.
Wythe was getting more and more involved in politics, and in 1768, he was made the mayor of Williamsburg.

Wythe was chosen to be a delegate for Virginia in the Continental Congress in 1775. Thomas Jefferson, who had been one of his students, was also a member of Congress.

During the discussions about independence in June 1776, he voted for the Declaration of Independence, which was written by Thomas Jefferson. In September 1776, he put his name on the Declaration.
In 1777, the Virginia House of Delegates chose him to be its Speaker. In the same year, he was appointed to the state’s highest court, the Chancery Court, where he stayed until 1788.

When Thomas Jefferson became Governor in 1779, he and the President of William and Mary College set up a new Chair of Law and Police. This was the first Law College in the United States. Wythe was the first Professor of Law in this department, which had just been set up.

He kept working in politics for the rest of his long life. In his later years, he worked to end slavery and freed many black people who were being held as slaves by white families.

The signing of the U.S. Declaration of Independence in September 1776 was his biggest political achievement. He had also taken part in all of the things that led to the adoption of the declaration.

He taught for a long time and did a good job of it. He had taught and helped guide a number of young men who went on to become famous. Thomas Jefferson, Henry Clay, James Monroe, and John Marshall were some of his best-known students.

In 1747, he married Ann Lewis, the daughter of Zachary Lewis, who had been his teacher. In 1748, after being sick for a few months, she died.
He tied the knot with Elizabeth Taliaferro in 1755. Their only child died when they were still young.

By 1805, Wythe had let George Wythe Sweeney, the grandson of his sister, live with him. People say that Sweeney poisoned Wythe, his housekeeper, and the son of the housekeeper. On June 8, 1806, Wythe died.

He dressed in a way that was very old-fashioned for his time.
He left all of his books to Thomas Jefferson, who had been his favorite student.
In his honor, George Wythe University (GWU) was named.