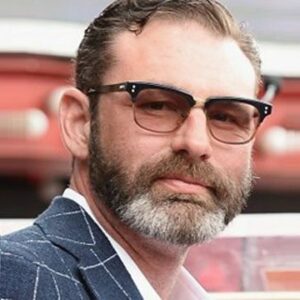 Georges LeBar, best known as performer RuPaul’s spouse, is an Australian painter, poet, and writer. Despite being married to RuPaul, a ‘Emmy Award’-winning TV star, LeBar keeps his personal life private. He owns and operates a 50,000-acre ranch in Wyoming, where he spends the most of his time writing down his ideas or turning them into colorful paintings. Despite LeBar’s best efforts to keep his personal life quiet, his affiliation with America’s most prominent drag queen is likely to attract some notice. Unlike his companion, who has an intriguing demeanor, LeBar is known for leading a low-key life away from the spotlight. He dislikes making public appearances. As a result, the couple decided to have a private ceremony to make their long-term relationship official. LeBar is a painter and a published author. ‘Six Inches Away,’ a collection of his oil paintings, was published in 2007. ‘Pillow Talk,’ his second book, is a compilation of his paintings inspired by C. M. Clark’s wonderful poems. This was also released in 2007.

LeBar was born in Perth, Australia, on January 24, 1973. LeBar has managed to keep the specifics of his boyhood out of the public eye as a private person. In Paris, New York, and Miami, he studied fashion and design.
On his 21st birthday, LeBar met RuPaul at New York’s ‘The Limelight’ nightclub. The pair kept their private relationship hidden from the public eye. Against all odds, and after a bizarrely lengthy romance of 23 years, the pair married in January 2017. After a few months of marriage, RuPaul broke the big news to the media. LeBar, on the other hand, kept to himself, refusing to make any public pronouncements about his marriage. America’s favorite drag queen disclosed the open nature of their marriage in a series of post-nuptial interviews.
RuPaul spends a lot of time away from LeBar due to his hectic TV profession in Los Angeles. However, according to RuPaul, their long friendship has ingrained in them a level of love and concern unlike anything they’ve ever felt for anyone else. In 2018, the pair was photographed enjoying RuPaul’s “star ceremony” at “The Hollywood Walk of Fame” in one of their few public outings together. When their schedules allow, LeBar and RuPaul also like taking trips together. Hawaii and Miami are their favorite vacation spots.