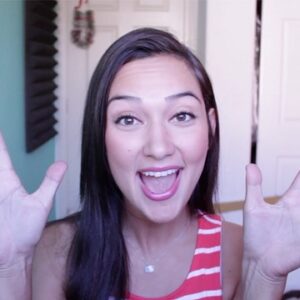 Geovanna “Geo” Antoinette Carreno-Kwan is a model, actress, and YouTube sensation. She works with JustKiddingFilms as a producer and marketing/PR executive. Geovanna is the founder and owner of the famed ‘Barbelle Brigade’ gym in Los Angeles. She appeared in short mini-series such as ‘She Has a Boyfriend’ (as the Motorcycle girl) in 2013, ‘Single by 30’ (as Brianna) and ‘Yellow Fever 2’ in 2016, and the ‘JustKiddingFilms’ series from 2010 to 2015, among others. From 2014 to 2015, Geovanna appeared as a guest on ‘Access Hollywood,’ the ‘Inside Edition’ documentary in 2015, and ‘MashBox,’ in 2012. In 2014, she produced the short comedy ‘Gun Fu’ as well as the short film ‘The Monster.’ She and her husband cooperated to start their own YouTube channel, ‘Bart &Geo,’ where she promotes her gym. The couple uses this channel to broadcast live stream recordings of their daily personal and business lives, such as vacations, shopping, dining out, and socializing with friends. For their maternity apparel brand radiance and Pip & Vine by Rosie Pope collections, Geovanna teamed with Kohls.

In early 2010, Geovanna Antoinette became a member of the JustKiddingFilms organization. Bart Kwan and Joe Jo founded the group in 2007. She began her career as an actor in one of their television mini-series.

The ‘Hangin’ With JK’ series (with episode titles like ‘Affection,’ ‘Quality Time,’ ‘Complaining,’ and ‘Are You A Saver or A Spender’) has been a hit with JKF fans. Geovanna and Bart join other couples in these videos to talk about modern-day relationship challenges.

They explore social, religious, Asian, and superstition problems on the JustKiddingFilms channel. As of 2017, they have 1.6 million members on this channel.

JustKiddingParty has approximately 1 million members and features entertainment and fun videos such as ‘Cards Against Humanity,’ ‘Guys Try Girls Products,’ and ‘Just Dance.’

‘JustKiddingNews’ has 1.6 million followers and has cast commentary on current events such as ‘Kazak Volleyball Player Is Too Pretty To Play Volleyball’ and ‘Girl Hires Hitman To Kill Her Parents Because They Are Too Strict.’

She shared a video series after becoming pregnant in 2017 that showed her developing baby bump as well as the changes in her lifestyle that came with it.

Geovanna’s personal vlog has a following. of 6 million people. The couple’s Barbell Brigade YouTube account features recordings of their workouts, which include lifting weights and squats, as well as her powerlifting sessions while she was pregnant.

‘Showering With My GF, My Workout Plan, and Pregnant Powerlifter’ are some of her most popular videos on this channel.

She promotes their gym gear collections on her channels, which are available for purchase on the BarbelleBrigade website.

Geovanna Antoinette was born on October 3, 1983, in Los Angeles, California, to conservative Mexican parents. She grew up playing guitar, flute, piano, and mandolin. She has an older sister, a younger sister, and an older brother.

Geovanna graduated from California State University, Los Angeles with a bachelor’s degree in science. She is fluent in Spanish and can read and write Korean.

Geovanna married Bart Kwan in Hawaii on September 9, 2015. Bart is a well-known YouTube personality. She is now expecting their first child. She has three dogs and is a dog lover and rescuer.

Her net worth was $ 1.6 million in 2016. Her net worth is boosted by the revenue earned by web advertisements.