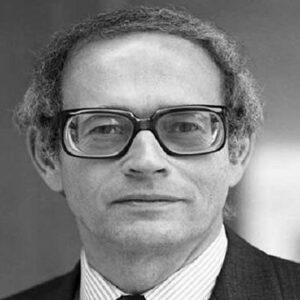 Gerald Edelman was a well-known American immunologist. He shared the 1972 Nobel Prize in Physiology or Medicine with Rodney Robert Porter. The two people won the Nobel Prize for figuring out how antibody molecules are put together. Edelman wanted to be a concert singer at first, but he changed his mind and decided to become a doctor instead. But while he was working in Paris for the U.S. Army Medical Corp, he read a book about immunology, which got him interested in antibodies. So, he went back to America to get his Ph.D. at the Rockefeller Institute. He then worked on antibodies and found that they were made of chains of amino acids held together by disulfide bonds. He made an exact copy of an antibody and talked about how the body makes them when it comes in contact with antigens. Not only did his work get him the Nobel Prize, but it also led to more research. Later, he started to study how cells work at their most basic level. This is when he found cell adhesion molecules, which hold cells together to make tissues. Then he started to study how the brain creates the mind. He came up with the theory of Neuronal Group Selection, which is also called “Neural Darwinism.” He also wrote a number of books, some of which were written for people who didn’t understand his ideas.

Gerald Edelman was born in Ozone Park, New York City, on July 1, 1929. Edward Edelman, his father, was a doctor, and Anna (née Freedman) Edelman, his mother, worked in the insurance business.

Gerald went to John Adam High School in Queens, which is in New York City. Since his goal was to become a concert violinist, he also studied with Albert Meiff, a well-known teacher and performer.

At age 16, Gerald realized he didn’t have the drive to become a professional violinist, so he decided to study medicine like his father. So, when he graduated from high school in 1946, he went to Collegeville, Pennsylvania, to attend Ursinus College.

Later that same year, he became a captain in the U.S. Army Medical Corps and practiced general medicine at a military hospital in Paris for two years. During this time, he became interested in antibodies and decided to learn more about them.

So, when he got back to New York in 1957, he became a graduate fellow at the Rockefeller Institute for Medical Research. Here, he worked with Henry Kunkel to find ways to break apart immunoglobulin molecules. He got his Ph.D. in 1960.

At this time, not much was known about how antibodies were made from a chemical point of view. Even though it was known at that point that they fought antigens, it wasn’t clear how they did so. Edelman began to look into this while he was working at the Rockefeller Institute.

He figured out that antibodies are made up of two light and two heavy chains of amino acids connected by disulfide bonds. Edelman was able to split these antibodies and make a perfect model in 1969. Later, he also found the exact place where antigenic binding happens and explained how they work.

After that, Edelman became interested in something else. He started to wonder how a single fertilized cell can turn into a living thing with many cells. So, he started working on primary cellular processes, with a focus on how cells interact and how the nervous system develops in the early stages of embryonic development.

In 1975, he found a new type of protein called “cell adhesion molecules,” or CAMs. He found that as the brain develops, these CAMs connect the neurons to form the brain’s basic circuit. Later, it was found that CAMs help the body shape itself and build its nervous system.

Soon, he started to look into “how the brain makes the mind.” He said that the idea that the brain works like a computer is wrong. Instead, he went in a different direction and used a lot of what he had learned while working on antibodies.

After that, he came up with the theory of Neuronal Group Selection (NGS), which is about how the brain develops and works. It was called “Neural Darwinism” as time went on. In 1978, he wrote his first technical book, called “The Mindful Brain,” in which he talked about his ideas.

In 1981, he started the Rockefeller University Neurosciences Institute and became its first director. Here, he kept working on the brain, and in 1987, he published a new version of his theory called “Neural Darwinism: The Theory of Neuronal Group Selection.”

Even though many scientists of the time disagreed with his theory, he didn’t give up. Then, to prove his theory, he wrote two more books: “Topology: An Introduction to Molecular Embryology” (1988) and “The Remembered Present: A Biological Theory of Consciousness” (1990). (1989).

Edelman moved The Neuroscience Institute (TNI) to San Diego, California, in 1993. It started out in a temporary location, but in 1995, it moved into its own building on the Scripps Research Institute campus. Here, he worked on many research projects right up until his death in 2014.

Most people remember Edelman for his work in molecular immunology. He thought that antibodies were made up of several chains of amino acids that were linked together by disulfide bonds. He broke these bonds and separated the antibodies so that he could figure out what their parts were.

After that, he found that antibodies are made up of two heavy chains and two light chains that are each made up of 1300 amino acids. Next, he found the variable regions that bind to the antigen and the constant regions that give the effector function. He finally made an antibody that was an exact copy of the original.

He also showed that the basic structure of all antibodies is the same. When different antigens attack our body, it makes different things by putting together different parts of genes. The immune system quickly comes together when the right antibody is chosen from these materials.

This discovery told us a lot about how antibodies are made and what they do. It also made it possible to do more research, which had a big impact on the field of medicine.

Gerald Edelman won the Nobel Prize in Physiology or Medicine in 1972 for his work on “the chemical structure of antibodies.” He shared this prize with Rodney R. Porter, an English biochemist who worked on it separately in England.

Gerald Edelman tied the knot with Maxine M. Morrison in 1950. There were three kids in the family. Eric, the oldest son, is a painter in New York. Judith, the daughter, is a well-known bluegrass singer. Only their second child, David, followed in his father’s footsteps and became an adjunct professor of neuroscience at the University of San Diego.

Edelman got prostate cancer and Parkinson’s disease in the last years of his life. He died in La Jolla, Calif., on May 17, 2014. He was 84 years old at the time.

Rodney R. Porter, an English biochemist, was also working on the same subject in England at the same time that Edelman was trying to figure out the structure of the antibody at the Rockefeller Institute.

In the end, Edelman’s team was just barely able to beat the English team. But the Nobel Foundation saw that both works were important and gave prizes to both of them.