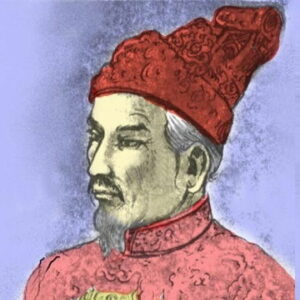 Gia Long was the first emperor of the Nguyen dynasty and the father of the modern country of Vietnam. He was the nephew of the last Nguyen lord who ruled over southern Vietnam. His name was Nguyen Phuc Anh. Even though he was born into a royal family, he had to deal with a lot of trouble in his early years because rival groups tried to wipe out the Nguyen clan. After his father and uncle were killed by rival leaders, Nguyen Phc Anh fled to the southern tip of Vietnam’s coast. There, by chance, he met a French priest named Pigneau de Behaine, who would eventually become his trusted advisor and play a big part in his rise to power. He got away with the help of the priest, and later, when he was fighting against his rivals, he asked the French for help. With the help of the French and weapons from Europe that were more advanced, he was able to beat his rivals. He called himself emperor and gave himself the name Gia Long. He gave his country its current name, “Vietnam,” and for the first time in hundreds of years, the country was united and not controlled by anyone else. He was a careful leader who was devoted to Confucius’s teachings and a big fan of Chinese culture.

Gia Long was born as Nguyen Phúc Anh on 8 February 1762 as the son of Nguyễn Phúc Luan and Nguyen Thi Hoan.
Lord Nguyn Phc Khoát of southern Vietnam chose his father to be his heir. But when the Khoat was on his deathbed, his plans were changed, and Luan’s younger brother Nguyn Phc Thun took the throne instead in 1765.

Then, Luan’s father was taken away and killed. Soon after, his uncle Thuan also lost his position as lord of southern Vietnam and was killed by his rivals in 1777 during the Tay Son rebellion. During this attack, several members of the ruling family were killed. Nguyen Anh was one of the few who made it out alive.

The young Nguyen Anh ran away to Ha Tien at the end of Vietnam’s southern coast because he was afraid for his life. Here, he met a French priest named Pigneau de Behaine, who became his advisor and helped him get away from his enemies.

In the end, Nguyen Anh got away with the help of the priest and went to the island of Pulo Panjang in the Gulf of Siam. The priest was a Catholic who wanted Nguyen to help him grow the Catholic Church in South East Asia in the future.

Pineau got French people to help him and was able to get several shipments of weapons and ammunition. In the meantime, Nguyen Anh built up his army at home and abroad, and when Pigneau arrived, he was able to keep southern Vietnam under his control.

The French officers taught Nguyen Anh’s troops how to fight in a modern way and showed them how to use Western technology in the war. Some French government officials, like Jean-Marie Dayot and Olivier de Puymanel, helped build naval ships and fortifications.

While the French officers trained his army, Pigneau and other missionaries helped buy weapons and other supplies for the army. The French priest also gave him advice on important matters and, until he died, acted as the real foreign minister.

With the help of the French, Nguyen Anh was able to strengthen his army and beat rival claimants at Hue and Hanoi in 1802. He said that he, Gia Long, would be the Emperor of the Nguyn Dynasty. Gia Long united what is now the modern country of Vietnam after more than two decades of constant fighting.

When he took over, he put in place an education and civil service system based on traditional Confucian ideas. He improved the country’s ability to defend itself and made it stronger in Indochina.

Gia Long was a careful leader who isn’t known for coming up with new ideas. He didn’t think that foreign trade was important for Vietnam’s growth, so he didn’t use new European technologies or try to make more business deals with European countries.

He was king for almost 20 years. During that time, he set up a good mail service and built public granaries to store harvests in case of future famines. He also changed the way money and the law worked in important ways.

He helped bring what is now modern Vietnam together. As a leader, he updated the country’s defenses, set up a good postal service, and built public granaries to store harvests in case of famines in the future.

During the war against the Tay Son in 1780, Gia Long got married for the first time. Tong Thi Lan, the daughter of a Nguyen general, was his first wife. She had two sons, with Crown Prince Nguyen Canh being the oldest.

Later, he married his minister’s daughter, Tran Thi Dang, who was his second wife. She had three sons with him.
After he took over Vietnam, he got married for the third time. The daughter of Le Hien Tong, the second-to-last emperor of the Le Dynasty, Le Ngoc Binh was his third wife. Le Ngoc’s children were two boys and two girls.

He had three wives and around 100 concubines.
On February 3, 1820, Gia Long died and was buried at the Thien Tho Tomb. He was posthumously named Thế Tổ Cao Hoàng đế.

Gia is one of the wealthiest emperors and is on the list of the most well-known emperors. Based on what we found on Wikipedia, Forbes, and Business Insider, Gia Long has a net worth of about $37.7 billion.