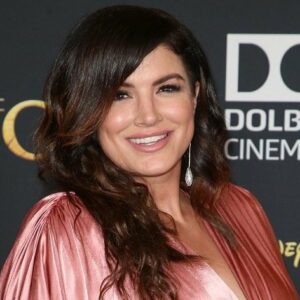 Gina Joy Carano is a fitness model, actress, and former mixed martial artist. She started out as a Muay Thai fighter and was dubbed “The Face of Women’s MMA.” With 12 victories, one loss, and one draw in Muay Thai competition, she has an incredible record. She’s also the first American woman to win a Muay Thai title in Thailand. She excelled in basketball, volleyball, and softball at school and studied gymnastics, jazz, tap, ballet, and horseback riding as a child. She is also a Jiu-Jitsu and wrestling expert. She has seven victories and one defeat in her MMA career. Her power, talents, and methods in the ring, mixed with her laid-back nature and gorgeous appearance, helped her become a major MMA celebrity. She has appeared in Hollywood blockbusters such as ‘Haywire’ and ‘Fast & Furious 6’ as an actress. She was frequently chastised for using her sex appeal to progress in her career. Such nasty insults had no effect on her winning attitude, and her followers continued to shower her with affection. Her remarkable skill, strong spirit, and determination have made her an inspiration to many.

Gina Carano was born on April 16, 1982, in Dallas County, Texas, to Dana Joy and professional football player Glenn Thomas Carano. Gina’s ancestors are Italian, with traces of English, Scottish, and German blood.
Casey, her older sister, and Christie, her younger sister, are her siblings. Despite the fact that her parents split when she was young and she was raised mostly by her mother, her father was an important part of her upbringing.
She graduated from Trinity Christian High School in Las Vegas, Nevada, where she also played basketball and helped the team win the state championship. After a year at the University of Nevada, Reno, she went to the University of Nevada, Las Vegas, to study psychology for three years.
However, she dropped out of school during her senior year to help her older sister through a difficult time. On the encouragement of her then-boyfriend Kevin Ross, she began Muay Thai training with Master Toddy at the age of 21.
She started working out hard after a Muay Thai gym teacher informed her she was overweight and needed to reduce weight. Master Toddy, a four-time world kickboxing champion, was astonished by her determination.
Her tremendous punches, lethal elbows, forceful kicks, natural strength, and agility were all seen as potential by the master. With his support, she succeeded in the sport and arrived in ‘Fight-Club’ scenarios in San Francisco, where she defeated female combatants.

Gina Carano starred in ‘Ring Girls,’ a cult film about five female Muay Thai boxers taking on the best fighters from around the world, in 2006. Her real-life prowess in the sport, as well as her beauty and charisma, garnered a sizable following. In Thailand, she also served as an icebreaker for female boxers.
Jamie Levine encouraged her to battle Leiticia Pestova in the first ever sanctioned women’s Mixed Martial Arts event in Nevada in June 2006. Carano won the first round in an amazing time of 38 seconds.
On September 15, 2006, she knocked out Rosi Sexton in the final seconds of the second round at the World Pro Fighting show in Las Vegas. On the 8th of December 2006, she defeated Elaina Maxwell in the first Strikeforce: Triple Threat female fight. The next year, she starred as a coach on the reality show ‘Fight Girls,’ winning millions of hearts for her incredible efforts.
She knocked Julie Kedzie out in the second round of the first televised female fight on Showtime on February 10, 2007. The fans celebrated both women by giving them standing ovations during the raging bout, which was dubbed ‘Fight of the Night.’
She won her bout against wrestling champion Tonya Evinger in September 2007 by employing submission for the first time, a rear naked choke. She defeated Kaitlin Young at EliteXC: Primetime in May 2008. Gina had given up 12.5 percent of her “show” purse to Young in order to keep the fight on the event after she failed to meet EliteXC’s 140-pound weight requirement.
The next year, she starred as ‘Crush’ in the NBC television series ‘American Gladiators,’ which helped her get more fans. She also starred in the video game ‘Command & Conquer: Red Alert 3’ as ‘Natasha Volkova,’ a Soviet commando and sharpshooter.
She stripped off at the weigh-in in October 2008 and made it to 141 pounds in time to meet Kelly Kobold. She overcame Kobold with a barrage of forceful kicks and strikes, resulting in a huge gash above Kobold’s right eye. Carano was declared the winner by a unanimous vote, and she dedicated the victory to her grandfather.
She made a cameo appearance in Michael Jai White’s film ‘Blood and Bone’ in 2009. She also posed topless on the cover of ‘ESPN The Magazine – The Body Issue,’ drawing criticism.
Carano’s MMA career came to an end on August 15, 2009, when she lost the greatest fight in the history of Women’s MMA in front of about 14,000 spectators in San Jose, California. Carano was defeated in the first round of Strikeforce’s inaugural Women’s Championship by Brazilian fighter Cristiane ‘Cyborg’ Santos. Carano also made history by becoming the first female boxer to earn $100,000 for a single fight. She was the world number three in the 145 lb. division, according to the Unified Women’s MMA rankings. Gina never returned to the ring after her heartbreaking loss to Cyborg. She went on to star in films including ‘Fast and Furious’ (2013), ‘In The Blood’ (2014), and ‘Dreadpool’ after her MMA career (2016).

Gina Carano was dubbed “The Face of Women’s MMA” due to her meteoric rise to fame, which she graciously declined. In the Spring 2008 issue of ‘Big Biz Magazine,’ she was named the ‘Hottest Woman In America.’
She was the third most searched personality on Google and Yahoo on May 13, 2008, after being the fastest-rising most-searched personality. She was also placed sixth on Yahoo’s ‘Top Ten Influential Women of 2008’ list. In May 2009, she was ranked 16 on the Hot 100 list in ‘Maxim.’
In April 2012, she got ActionFest’s first ‘Chuck Norris Award’ for best female action star of the year. In the same year, she was awarded the ‘Awakening Outstanding Contribution Award.’
She was nominated for the ‘Critics Choice Awards’ in the best actress category in 2013 for her role in ‘Haywire.’ In the same year, she was among Yahoo’s top ten most searched athletes.

From September 2012 until September 2013, Gina Carano was in a two-year relationship with Henry Cavill, who plays Superman in the film “Man of Steel.” Since June 2015, she has been in a relationship with Kevin Ross, according to reports. Gina and Kevin were previously married for four years and then separated for almost a decade before reuniting.
Throughout her boxing career, she was openly mocked and humiliated for her excellent looks. Critics questioned her abilities, claiming that she was given preferential treatment and that she took advantage of her beautiful appearance to advance in her career. She remained composed throughout and tastefully allowed her work respond to the taunts.

Her estimated net worth is $4 million.

Gina Carano does all of her own stunts in the movies. She played a battle robot named ‘Danica’ in the episode ‘Unbound’ of the Fox series ‘Almost Human’ (2013-14).