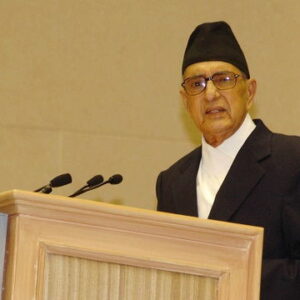 Girija Prasad Koirala was born in Saharsa, Bihar, India, on July 4, 1924, when the country was still under British authority. When Girija was born, his father, Krishna Prasad Koirala, was exiled from Nepal and living in India.
Matrika Prasad and Bishweshwar Prasad were his two older brothers.

In 1947, Girija Prasad Koirala became active in politics after leading a workers’ strike at the Biratnagar jute factory.
In 1948, he created the ‘Nepal Mazdoor Congress,’ which eventually became the ‘Nepal Trade Union Congress-independent.’
He was elected president of the ‘Morang District Nepali Congress’ in 1952. He was the president of this organization until King Mahendra arrested him in 1960 for attempting to overthrow the monarchy.
In 1967, he was released from prison and exiled to India with the rest of his party’s officials and workers.
In 1975, he was appointed General Secretary of the ‘Nepali Congress.’ In 1979, he returned to Nepal.
In 1990, he was an active participant in the ‘Jana Andolan,’ leading the campaign that brought Nepal’s ‘Panchayati rule’ and multiparty politics into being.
When the first election of a multi-party political system was held in 1991, he was elected to parliament from the Sunsari-5 and Morang-1 constituencies.
King Birendra nominated him Prime Minister of Nepal since the Nepali Congress was the largest party in the Pratinidhi Sabha (House of Representatives) after gaining 110 of the total 205 seats.
He remained Prime Minister of Nepal until 1994, when his government was ousted by a no-confidence motion brought by 36 members of his own party. He had no choice except to dissolve parliament. Later, the ‘Unified Marxist-Leninist Communist Party of Nepal’ came to power. Suya Bahadur Thapa’s coalition government dissolved in 1998, and he led a minority administration till December 25, 1998. He then led a coalition administration of three political parties, including the CPN (UML) and the ‘Nepal Sadbhawana’ party, until 1999, when he was re-elected as Prime Minister of Nepal for the second time.
The Nepali Congress, led by Krishna Prasad Bhattarai, who sought to be Prime Minister, won the election in 2000. G. P. Koirala led a group of dissident ministers who compelled him to face a no-confidence motion or resign. Bhattarai picked the latter choice, and Koirala was elected Prime Minister for the third time in Nepal’s history.
In 2001, he was forced to retire from his position as the government’s civil conflict with the Communist Party of Nepal (Maoist) deteriorated. He had attempted to enlist the troops to put down the uprising, but King Birendra had objected. Sher Bahadur Deuba took his post as Prime Minister.
On April 24, 2006, when the ‘Pratinidhi Sabha’ was reinstated after the ‘Loktantra Andolan,’ the leaders of the ‘Seven Party Alliance’ chose Koirala to lead the government as interim Prime Minister.
On April 1, 2007, he was re-elected Prime Minister for the fourth time. The Nepali Congress, the SPA, and the CPN (Maoist) formed the administration, and the Constituent Assembly declared Nepal a republic on May 28, 2008.
The Nepali Congress wanted him to be the first President after Nepal became a republic, but the CPN objected (Maoist).
On June 26, 2008, he resigned as Prime Minister, but his resignation was not accepted because the President had not yet been chosen. On July 23, 2008, Ram Baran Yadav, Nepal’s first President, accepted his resignation. Prachanda, the CPN (M) head, was elected Prime Minister of Nepal.
He continued to promote democratic ideas after resigning his office for the rest of his life.

‘Simple Convictions: My Struggle for Peace and Domocracy’ was written by Girija Prasad Koirala.

In 1952, he married Sushma Koirala, the headmistress of a local women’s school in Biratnagar.
Sushma Koirala, the couple’s daughter, was born of their union.
During his final years, he battled lung illnesses and asthma.
On March 20, 2010, Girija Prasad Koirala died at his daughter’s residence in Kathmandu, Nepal.

During the Maoist struggle, Girija Prasad Koirala was essential in achieving peace. For his peaceful work, the Nepalese government nominated him for the Nobel Peace Prize.