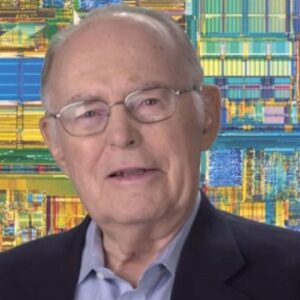 Gordon Moore is the company’s Chairman Emeritus. He is best recognized as the co-founder of Intel Corporation. He has been a pivotal player in the field of technology, receiving numerous awards for his outstanding achievements. He majored in chemistry and also took physics as a course. His childhood and early life are largely unknown. However, as a university student, he was extremely interested in research and earned a doctorate from ‘Caltech.’ When physicist William Shockley chose him as one of the eight persons in the group, he was working with semiconductors. He worked with that physicist for a while, but the turning moment in his life came when he decided to leave the physicist and join Sherman Fairchild’s ‘Fairchild Semiconductor’ business. His decision to co-found the ‘Intel Corporation’ and combine his scientific knowledge with his economic acumen was a watershed moment in his career. However, even before the corporation was founded, he became famous for his observation known as ‘Moore’s Law.’ Gordon made a significant contribution to the world of technology with this. Apart from that, he is credited with other inventions that he has produced through Intel, and he is on his way to bringing many more to the public.

Gordon Earle Moore was born on January 3, 1929, in San Francisco, California.
Gordon graduated from Redwood City’s ‘Sequoia High School’ and went on to ‘San Jose State University.’ He then enrolled at the ‘University of California, Berkeley,’ where he earned his B.Sc. in chemistry in 1950.

He went on to the ‘California Institute of Technology’ (Caltech) to seek a Ph.D. in chemistry with a minor in physics shortly after.

Gordon worked as a postdoctoral researcher at the ‘Applied Physics Laboratory’ of ‘John Hopkins University in Baltimore between 1953 and 1956.
He received his Ph.D. from the ‘California Institute of Technology’ in 1954. (Caltech).

The Career of Gordon

He worked at the ‘Shockley Semiconductor Laboratory,’ which was a division of the corporation ‘Beckman Instruments,’ alongside scientist William Shockley.

Sherman Fairchild, an American inventor, and industrialist backed these treacherous eight. The firm ‘Fairchild Semiconductor’ was founded, and these eight people were hired as employees.

In 1965, Gordon was named director of ‘Fairchild Semiconductor’s research and development (R&D). He was interviewed by the magazine ‘Electronics’ at the same time, and in response to a query about the future of semiconductor components, he offered an observation that became known as ‘Moore’s Law.’

On April 19, 1965, this observation was published in the magazine ‘Electronics.’ It stated that “since the integrated circuit was conceived, the number of transistors per square inch on integrated circuits has increased every year.” He also predicted that the current trend will continue for at least the next ten years.

However, a decade later, he changed his mind and declared that the tendency will occur every two years rather than every year. This is an important development that has aided the semiconductor industry greatly.
Together with businessman Robert Noyce, he formed ‘NM Electronics’ in 1968. This business ultimately grew into the well-known ‘Intel Corporation.’

Before being designated President of the ‘Intel Corporation’ in 1975, Moore served as Executive Vice President.
This brilliant scientist served as the company’s Chief Executive Officer beginning in April 1979 and kept the position until 1987. He was also a board member of ‘Caltech’ and chaired the corporation’s Board of Directors at the same time.

He worked as a member of the Business Advisory Board for the biotechnology company ‘Gilead Sciences’ from 1991 to 1996. He was then appointed to the company’s Board of Directors as a member.

He was elected Chairperson of the California Institute of Technology’s Board of Trustees in 1993. (Caltech). He is currently a life trustee of the institute.
He served as Chairman of Intel’s Board of Directors until 1997 when he was named Chairman Emeritus of the company.

Moore and his wife Betty Moore co-founded the Gordon and Betty Moore Foundation in the year 2000. This group is mostly concerned with environmental preservation. For a few years, this learned personality worked with the non-profit organization ‘Conservation International.’

He is a co-founder of the technology behemoth ‘Intel Corporation,’ and has played a key role in the company’s major technological advancements since its creation.

However, his finding generally known as ‘Moore’s Law’ is one of his most significant contributions to the realm of technology. The rule, which has had a huge impact on the semiconductor industry’s downsizing, predicted that the number of electronic components in an integrated circuit will double every two years.

He was inducted into the ‘National Academy of Engineering’ in 1976.
In 1990, he was awarded the ‘National Medal of Technology and Innovation’ by President George H. W. Bush.
In 1998, he was named a Fellow of the ‘Computer History Museum.’

In 2001, he was awarded the ‘Othmer Gold Medal’ for his outstanding achievements in the fields of chemistry and science.
He was awarded the ‘Presidential Medal of Freedom’ in 2002, and he also received the ‘Bower Award’ for Business Leadership in the same year.

He was elected a Fellow of the ‘American Association for the Advancement of Science’ the following year.
He was awarded the ‘IEEE Medal of Honor’ in 2008 and the ‘Future Dan David Prize two years later for his remarkable contributions to the field of telecommunications.

He has been active in numerous charitable endeavors and has made significant contributions to numerous organizations, including ‘Caltech’ and ‘The University of California.’ With the help of this illustrious scientist, the world’s second-largest optical telescope, the ‘Thirty Meter Telescope,’ was erected.

Many organizations, such as the ‘Electrochemical Society’ and the ‘Society of Chemical Industry,’ bestow prizes and medals in his honor.

Gordon Moore, who has a net worth of $7.1 billion, co-founded Intel Corporations and currently serves as Chairman Emeritus.

Gordon Moore made his fortune in the business sector as the creator of Moore’s Law, which was first published in the April 1965 issue of Electronics Magazine. He was born in the United States of America, in the city of San Francisco.

Moore’s genome was sequenced using the ‘Personal Genome Machine Platform’ of the ‘Ion Torrent,’ which was the platform’s first human genome sequenced.