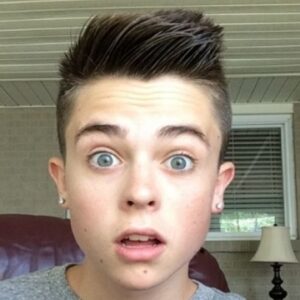 Grant Landis is a well-known young pop sensation whose original and cover songs on iTunes and YouTube helped establish his music career. Grant has been singing since he was twelve years old and is considered one of the top young music talents. He began his career mostly in the country music genre, but he gradually expanded into other genres, eventually becoming a well-known pop performer. He’s been putting on multiple stage gigs around town since his music videos and cover versions became viral on ‘Facebook.’ On ‘Instagram,’ he has roughly 428,000 followers, and on ‘Twitter,’ he has 299,000 followers. His ‘Facebook’ profile has over 22,000 followers, and he has over 52,000 subscribers on his ‘YouTube’ channel. His appearance on the LifeTime Channel’s singing reality show ‘The Pop Game’ in 2017 boosted his already-growing fame. Grant is not only a beautiful voice, but also a fantastic songwriter and acoustic guitarist.

Grant Landis has loved music since he was a child. He began playing the guitar at an early age, and by the age of eleven, he was singing songs and playing the guitar. There was never a time when he didn’t hum a tune or compose his own music. In fact, he was gifted with the ability to compose his own versions of popular tunes.
Acoustic guitarists and musicians such as Ed Sheeran and John Mayer influenced him. Grant penned his first song when he was twelve years old. He was able to collaborate with Grammy Award-winning singer/songwriter Kristian Bush on a couple of his tracks thanks to his parents’ backing. With the help of Brian Maher and recording artist Rich McCready, he wrote three songs by the age of twelve.
When he was thirteen, he released a couple music videos on ‘iTunes’ and ‘YouTube,’ which were a smash and immediately went viral on social media. The song ‘In This Moment With You,’ which has over 783,000 views on his YouTube page, was his first hit music video.
When he began performing Justin Bieber’s “As Long As You Love Me,” Katy Perry’s “The One That Got Away,” and his own “Stay With Me,” he became a teen sensation. With songs like ‘Good Enough’ and ‘Not Alone,’ Grant has once again begun composing his own music at the age of seventeen. He’s also teamed up with other ‘YouTube’ artists like Ellise.

What Is It About Grant Landis That Makes Him So Special?
His childlike charm and euphonious voice alone are enough to distinguish him. His attractiveness only adds to his magnetism. He is a female heartthrob, and many young teenagers look up to him for inspiration. He earned a reputation for himself in the music scene at the age of thirteen.
Though his voice has changed as he has progressed through adolescence, it has only improved! His success is due to his soothing voice and commanding theatrical presence.
He aspires to one day be a ‘Billboard’ chart-topping artist and is now working hard to further his singing career and realize his aspirations.

Beyond Notoriety of Grant Landis

Grant, in addition to playing the guitar and concocting catchy tunes, is a sports fanatic. He finds time to not only watch his favorite sports on television, but also to play basketball and baseball. He enjoys remaining in shape and frequently visits the gym; though his workouts can be strenuous at times, he enjoys the results of a toned body. He is an animal lover, and his favorite animals are pandas, which is unusual. Grant is a foodie who would never miss a meal! A healthy pizza is his go-to comfort food. Blue is Grant’s favorite color. He lives with his family and spends most of his time with them on holidays.

Grant Landis was born in the state of Missouri in the United States in the year 1999. Mike Landis is his father, and he has two brothers named Garrett and Grayson. He is currently a high school student, and he recently posted photos of himself attending prom on his ‘Instagram’ account.
He plans to focus fully on his singing career after his education is completed. He’s developed a strong bond with the other contestants on ‘The Pop Game,’ and he goes out with them frequently. Grant had kept his relationships private until lately, when he posted a photo of himself with a gorgeous young girl on ‘Instagram,’ handing her a bouquet of roses and informing his followers that he is dating her. Though he hasn’t revealed her name, we know she’s stunning and they make a great couple!