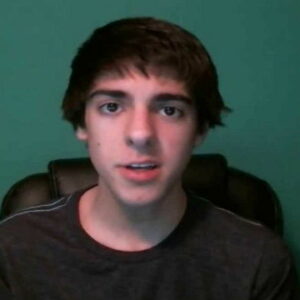 Sean, an American YouTuber best known for being one of the most well-liked Minecraft commentators, goes by the online alias Grapeapplesauce. Sean frequently plays and uploads Minecraft videos on a variety of game modes, including Minecraft Skywars, Minecraft Murder Mystery, Minecraft Bed Wars, Minecraft Hunger Games, and Minecraft UHC. He is the proprietor of the CoveMC server and is listed on the UHC and Cube SMP Rosters. He participates in the Cube Vanilla SMP server as well. He founded Team Flux, a competitive PvP team that was first led by Dfield and included Grapeapplesauce, Huahwi, CreeperFarts, PrivateFearless, and Solrflare. He played in the “Hunger Games Competition” with PrivateFearless from Team Flux as team “Doy Doy,” which went on to win all three Survival Games rounds and the tournament. Additionally, he was the winner of Cube UHC’s seasons 7, 13, and 14. While his YouTube channel primarily consists of Minecraft videos, he also plays other games and streams them live on Twitch. He occasionally uploads a vlog to inform his viewers about his channel or personal life.

On July 6, 2011, Grapeapplesauce signed up for YouTube. On August 28, 2012, she began uploading the “Minecraft Hardcore Survival” series. He had previously played “Slender: The Eight Pages,” a first-person survival horror game. He had 1100 subscribers by the time he turned 18 and thanked them in a video. In 2013, he first attracted regular subscribers.

His busy work schedule prohibited him from routinely posting videos to his channel, so he decided to leave his job and pursue YouTube full-time, which he revealed on January 19, 2015. He also used to sell satellite dish subscriptions at Dish TV. He had 300,000 subscribers before the end of the year. His viewers requested a room tour and setup video from him regularly, and on January 2, 2016, he finally obliged them. He has subsequently achieved his goal of paying his expenses by playing video games and has racked up over 551k YouTube subscribers. A collection of stuff featuring the subject “Grapeapplesauce,” including clothes, has also been introduced by him.

After playing on the Minecraft Survival Games server for a while, Grapeapplesauce returned to Hive because of the growing number of hackers and the MCSG disguise flaw. He has won three seasons of Cube Ultra Hardcore (also known as Cube UHC, formerly known as Minecraft: Ultra Hardcore). He has only missed one season, however even though he was invited to compete, he was unable to do so because he overslept.

With 47 kills, he holds the record for most kills in PvP, although he also had the most unlucky and glitchy deaths. He is one of four UHC members with the most season victories, with three, and one of three with two straight victories in a season (four, if YouTuber UHC wins are counted). He is known for being the Cube member that has played Survival Games the longest, beginning in late 2012. Additionally, he took part in United UHC season 1, where he placed sixth.

Sean, better known by his stage name Grapeapplesauce, was born on December 8, 1994, in Cheyenne, Wyoming, but was raised in Alaska. He was the first chair cellist in his state for eight years, which included his time in high school. His father has played Minecraft with him and appeared in several of his most recent videos under the name “Grapeapplepops.” He also likes photography and longboarding. Two cats are his pets.

Grapeapplesauce was in a long-distance relationship with Danielle, a woman he met online who used the Twitter handle “BustyUnicorns.” On November 27, 2014, he publicly announced their relationship in a tweet thanking his family, friends, fans, and his girlfriend. Since then, the two have frequently declared their love in public on Twitter. On their anniversary in March 2015, they also received congratulations from friends and admirers. However, in the same month, followers began to notice that they were staying away from one another on Twitter, which gave rise to speculations of their breakup.

Later, she acknowledged that they broke up because he had different priorities while responding to inquiries from fans. In order to prevent offensive comments, she eventually stopped using the alias “BustyUnicorns” and started going by the name “LilBub.” Danielle claims that Grapeapplesauce once had a brief relationship with Bee (‘HeyImBee,’ an Australian YouTube gamer and fellow Cube member), but she dumped him in favor of ‘Bayani,’ another Minecraft-based YouTuber.

One of the wealthiest and most well-known YouTube stars is grapeapplesauce. Our examination of information from sources like Wikipedia, Forbes, and Business Insider indicates that Grapeapplesauce’s net worth is about $1.5 million.