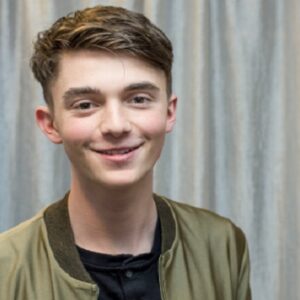 Greyson Chance is a composer and vocalist from the United States. He initially gained attention after he sang a cover of Lady Gaga’s “Paparazzi” for his sixth-grade talent show, which went viral on YouTube. Ellen DeGeneres, the Emmy award-winning talk show host, was so taken by his performance that she signed him to her new record label, ‘Eleveneleven.’ He also obtained a recording contract with ‘Interscope Records’ at the age of 12 and became a professional musician. In 2010, iTunes released his debut track, ‘Waiting Outside the Lines.’ During this time, he also went on tour in Paris and London, performing live. In 2011, he released his second single, ‘Unfriend You,’ followed by his debut album, ‘Hold On ‘Til the Night.’ In the United States, the video reached number 29 on the charts. He went on tour in Southeast Asia and performed in Beijing at the MTV-CCTV Mandarin Music Awards. Greyson has received numerous awards, including the “Hollywood Teen TV Award” for “Teen Pick You Tube Artist of the Year,” the “Youth Rock Award” for “Rocking New Artist of the Year,” the “MTV-CCTV Mandarin Music Award” for “Most Popular New International Artist,” and the “Shorty Award” for “Best Singer.” He is dedicated to his profession and has chosen to be single in order to focus on it. He now has his own official website and Twitter account, as well as a big social media following.

Greyson Michael Chance was born on August 16, 1997, in Wichita Falls, Texas, to Scott and Lisa Chance. He grew raised in Edmond, Oklahoma, with an older brother, Tanner, and an older sister, Alexa. His ancestors are of English, German, and Bohemian descent.

With his siblings, he attended Cheyenne Middle School. Greyson was motivated by his brother and sister, both of whom played music in school, despite being the youngest in the family. At the age of eight, he began singing and playing the piano.

His mother enrolled him in piano lessons for three years to promote his musical talent. He, on the other hand, lacked formal vocal instruction.

After hearing Lady Gaga perform at the 2009 MTV Video Music Awards, he was also strongly influenced by her music. Christina Aguilera, the Augustana Rock Band, Elton John, and the late Beatle vocalist John Lennon were among his musical favorites.

Chance was in sixth grade when he first became famous for his cover of Lady Gaga’s “Paparazzi” during a middle school talent contest, which was broadcast on YouTube and went viral. His accomplishment inspired him to seek a musical career.

His music career exploded at such a young age that his parents had to make a decision about how to go with their son’s future.

They eventually decided to give him their full support in his pursuit of a career in music, and schoolwork took second place.

The Career of Greyson

Chance was found on YouTube by Ellen DeGeneres, an Emmy award-winning talk show personality, and became the first artist signed to her new record company, ‘Eleveneleven.’

In 2003, he was invited to appear on her talk show, ‘Ellen: The Ellen DeGeneres Show.’ At the age of six, this was a watershed moment in his career.

Chance had his own official website and Twitter account by the age of 12 and had amassed a sizable fan base. He also signed a record deal with Alex Wilhelm’s ‘Interscope Records.’ He’d gone professional at that time.

In October 2010, his debut single, ‘Waiting Outside the Lines,’ was released digitally by iTunes. There was a Filipina and Charice remix on the album, as well as a studio version of Lady Gaga’s ‘Paparazzi.’ During this time, he toured Paris and London, performing his song live in both cities.

He also appeared on CBS’s Early Show and kicked off his ‘Waiting 4U’ tour with Cody Simpson, an Australian pop/R&B singer.

He published his second single, ‘Unfriend You,’ on iTunes in 2011. The song had its debut on the Ellen DeGeneres Show. In August of that year, he released his debut album, “Hold On ‘Til the Night.”

The video featured an appearance by Ariana Grande from ‘Victorious,’ and it peaked at number 29 on the US charts. During this time, he also visited Southeast Asia and performed at the MTV-CCTV Mandarin Music Awards in Beijing.

Chance fell in love with the East and returned to the region in 2012 to promote his new EP, ‘Truth Be Told Part 1’. His music was well received, and he quickly established himself as a youth icon and music lover’s sweetheart.

He performed at the Sundance Film Festival in 2014, singing his new song ‘Temptation.’ This was the time when he was working on his 2016 EP, ‘Somewhere Over My Head,’ which he released.

He played live in Los Angeles, Chicago, and New York City prior to the publication of his EP. He also used YouTube and Twitter to promote the release of his EP.

He has made a name for himself as a renowned singer, composer, and pianist. ‘Broken Hearts’ and ‘Stars,’ two of his original songs, have received over six and four million views on YouTube, respectively.

‘Hold On til the Night,’ his debut studio album, was released in August 2011 on CD and digital formats. In its first week, the album sold 16,000 copies.

In 2012, he was named the MTV-CCTV Mandarin Music Award winner for Most Popular New International Artist. With the ‘Shorty Award’ for ‘Best Singer’ and the ‘Heat Tweets Award’ for ‘Most Dedicated Fan Army’ the following year, his fan base grew.

Greyson is rumored to be unattached. His YouTube popularity has made him one of the most popular young people on the internet.

He is friends with Ali Simpson and Lauren Westphalen, although they have never been romantically involved.

Chance is a Democrat who campaigned heavily for Hillary Clinton in the 2016 presidential election.

Greyson Chance has a net worth of $2.4 million and is an American pop rock singer and pianist.