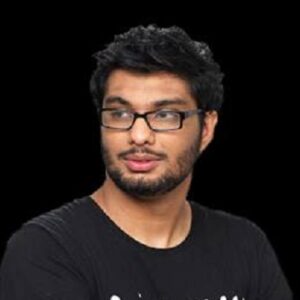 Gursimran Khamba is a stand-up comedian, writer, and blogger from India. All India Bakchod, or AIB, is credited with significantly developing and rebuilding the Indian stand-up comedy scene. Gursimran Khamba, along with fellow founder-member and comedian Tanmay Bhat, deserves the lion’s share of credit for bringing all those taboo subjects into the light in a new comedic avatar. Khamba, as he is commonly known among friends and fans, is a multidimensional talent with a solid journalism educational background. He has taken AIB to legendary heights in a very short time with Tanmay, Rohan Joshi, and Ashish Shakya (the latter two joined AIB later). Aside from stand-up comedy, he is a great writer who writes articles to some of the most prestigious names in internet journalism on a daily basis. When he’s not creating witty material for the country’s elite, he may be found on numerous podcasts and radio shows.

Khamba is from a Delhi-based Punjabi family of modest means. He had never considered stand-up comedy or humor as a career route when he was a kid. Instead, he was interested in pursuing a career in journalism and serious writing. He was an A-student throughout high school.

Khamba chose to study Journalism and Media Science at Delhi College of Arts and Commerce, which is part of Delhi University, for his Bachelor’s degree.

During his time at DU, Khamba was active in student politics, participating in protests and petitions against the current Congress government’s reservation policies.

Khamba had intended to pursue his master’s degree overseas after completing his bachelor’s degree. He was even offered a full scholarship to a university.

However, he missed his admittance deadline due to a terrible attack of tuberculosis, which forced him to stay at home for the next six months.

During his downtime, Khamba spent his days on the internet watching stand-up comedy routines by American comedians, and his interest in the industry blossomed from there. He also launched his own blog, which he christened ‘Khamba’s Blog.’

His unique view on India’s many social and political concerns set his blog apart from the competition and gained him a considerable social media following.

Khamba traveled to Mumbai the next year to pursue a career in stand-up comedy, and he finally enrolled at Mumbai’s prestigious Tata Institute of Social Sciences to earn his Master’s degree in Media and Cultural Studies.

Khamba’s initial foray into stand-up comedy took place in his hometown when established comedian Rajneesh Kapoor spotted his blog and his amusing views on serious subjects and arranged for his first appearance at an open mic night.

However, the venture did not get very far, and things began to heat up once Khamba relocated to Mumbai. Tanmay, Rohan, and Ashish, his future collective colleagues, met him here as they began their stand-up comedy careers with actor comic Vir Dass’s troupe Weirdass.

They learned to write many kinds of stand-up comedy, such as coherent routines and skits, at Weirdass. Khamba began to attract a lot of media attention after performing multiple stand-up shows at Mumbai’s famous Comedy Club. As a result, he earned several gigs at various corporate gatherings.

In 2012, Khamba and Tanmay Bhat formed a partnership and began producing regular podcasts under the moniker ‘All India Bokchod,’ or AIB. As they say, the rest is history.

Tanmay and Khamba were joined by Ashish and Rohan as the AIB Podcast grew in popularity. AIB branched out into a larger scene as its internet notoriety grew.

‘The Royal Turds’ was their debut live event, which took place in Mumbai’s Liberty Cinema in 2013. They were engaged for gigs in all of India’s major cities when the act became highly famous.

Khamba has had a lot of success as part of AIB. On YouTube, the channel has over 2.2 million subscribers. He also participates in a variety of activities through the group, including award show scriptwriting, brand and media advice, and academic and business training.

Since its beginnings, AIB has expanded its efforts to include advertising through Vigyapanti and screenwriting through AIB First Draft.

AIB has also made its television debut on Star Plus and Star World India’s ‘On Air with AIB’ program. Through his writing, Khamba is one of the most important foundations sustaining AIB’s prosperity.

Khamba, Tanmay, Rohan, and Asish found themselves in hot water after their charity event, the All India Bakchod Knockout, held on December 20, 2015, at the Sardar Vallabhbhai Patel Stadium in Worli, Mumbai, was determined to be entirely unsuitable and disrespectful to Indian sensitivities.

The episode featured Karan Johar as the Roast Master, who roasted Bollywood celebrities Arjun Kapoor and Ranveer Singh in front of a large audience.

While Arjun and Ranveer were excellent sports, the event drew a significant number of Bollywood’s who’s who, some of whom were offended by the profanity and obscene material.

Several complaints were filed with the Mumbai police, and Khamba was named among the suspects, along with his teammates Karan Johar, Arjun Kapoor, and Ranveer Singh. Khamba and the rest of the AIB collective were charged with obscenity by Mumbai Police.

The response from Bollywood and the artistic world appeared to be split. While Amir Khan and others attacked the show, the majority of the comedy circuit backed Khamba and AIB. The matter is currently ongoing before the Mumbai High Court.

The Knockout’s notoriety, according to Khamba, was a windfall in terms of catapulting AIB into national and international prominence.

The AIB gained a household name as a result of the outcry, and people’s interest led to their YouTube channels becoming extremely famous.

The Knockout is said to have raised over 40 lakh rupees for its intended charity as a result of its popularity. AIB was named India’s richest comedy collective in 2016, and Khamba was named one of the highest-paid performers as a result, even surpassing famous actor Rajnikanth in the process!

Khamba’s sense of humor is sardonic, and his work is littered with witty references. Khamba is frequently seen sitting upright with a poker expression throughout the funniest of stuff, until delivering a deadly punch-line.

When it comes to content quality, his meticulous attention to detail and awareness of his surroundings earn him points.

Apart from comedy, Khamba is a regular contributor of papers demonstrating his understanding of the country’s political and socio-economic situation.

His writing style is peppered liberally with wit while also being shockingly hard-hitting. As a citizen of the country, he is zealously committed to effecting even the most minute changes through his humorous and yet poignant writing.

Gursimran Khamba, a well-known comedian, has a net worth of $58 million.