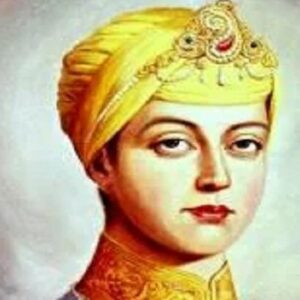 There were 10 Sikh Gurus, and Guru Har Krishan was the eighth. When he succeeded his father Guru Har Rai on October 7, 1661, at the age of five, he was proclaimed the youngest guru in Sikhism. When the seventh Sikh Guru, who was his father, passed away at the young age of 31, he designated Har Krishan as his heir. Guru Har Krishan was extremely wise and mature beyond his years, despite the fact that he was only a young child when he became the Guru Gaddi. In reality, he was the one who encouraged the Sikh adherents after his father passed away suddenly and advised them to accept God’s decision rather than wailing or moaning. As the Bal Guru (Child Guru), he quickly gained notoriety among the general populace. He continued the work of his forebears and exhibited a special aptitude for elucidating verses from the Holy Granth. The rising fame of the young guru alarmed Mughal Emperor Aurangzeb, who invited him to the Mughal court. Following his interaction with the guru, Aurangzeb was persuaded by his holiness. Guru Har Krishan was an extremely compassionate individual who gave his utmost to helping smallpox patients during an outbreak before falling ill himself. At the age of eight, he passed away from the illness.

Guru Har Rai and Kishan dei gave birth to Har Krishan on July 23, 1656, in Kiratpur Sahib, Rupnagar, Punjab, India (Mata Sulakhni). Ram Rai was his only older brother. His father was the eighth Sikhism guru and was well-known for having a kind and understanding soul.

Prior to his passing, Guru Har Rai designated Har Krishan as his successor. Even though Har Krishan was only five years old, the guru chose him because he believed his older son Ram Rai was working with the Mughal Empire.

Guru Har Rai passed away on October 6, 1661, and Har Krishan—the Sikh Guru who followed him—became the sect’s youngest leader on October 7. When Guru Har Rai unexpectedly passed away, the Sikh faithful were inconsolable, and it was the new Guru Har Krishan who comforted them by advising them to accept God’s plan.

Despite still being a young child, the young guru showed amazing maturity and insight, and he quickly won the hearts of Sikhism’s adherents. He had a remarkable gift for explaining sections from the Holy Qur’an, and his commentary enlightened the audience.

The rising fame of the guru alarmed the Mughal Emperor Aurangzeb. So, he invited him to appear in court in Delhi. The guru set out on his tour after giving it some serious thought and decided to visit Aurangzeb.
On his route to Delhi, the guru passed through Ropar, Banur, and Ambala. When he came close to Panjokhara, a Sikh asked him to stay there for a day because many followers were traveling there to visit the guru. guru concurred.

The uneducated man began reciting a coherent commentary of the sacred text, much to the surprise of the onlookers. The onlookers dropped their heads in awe at the miracle. Lal Chand was astounded by this occurrence and became become a fervent devotee of the guru.

Raja Jai Singh and the Delhi Sikhs gave the guru a dignified greeting when he arrived in Delhi. In Raja Jai Singh’s bungalow, where he resided, throngs of people flocked to meet him and ask for his blessing. The Raja decided to put the guru’s wisdom to the test by asking him to choose the queen from a group of elegant women. The actual queen was quickly identified by the guru.

At some point, Guru Har Krishan went to Aurangzeb’s court. Sources claim that the emperor gave the guru two sizable trays, one containing gifts such as garments, toys, and ornaments, and the other containing a holy man’s mantle and cowl. The person wearing a holy man’s robe was accepted by the guru. Aurangzeb was certain that the young kid was a devout person.

Delhi was being decimated at the time by serious cholera and smallpox outbreak. With little regard for his own health, the guru started attending to the patients. Regardless of their culture or faith, he gave his utmost to serve them all. His unselfish dedication moved the Muslim community so deeply that they gave him the nickname “Bala Pir” (child prophet). The guru fell ill himself and passed very shortly after.

Guru Har Krishan was the Sikh Guru who was the youngest. Despite having a brief reign of only 2 years, 5 months, and 24 days, he gave the best of himself to serve humanity throughout that time. When the guru was in Delhi, a smallpox outbreak struck the city, and he generously treated the afflicted regardless of their caste, religion, or community.

Following his unselfish assistance to the smallpox victims, Guru Har Krishan became unwell with a high fever. His illness quickly turned into smallpox, which devastated his little body. He accepted the pain as God’s will with amazing wisdom.

The Sikhs pleaded with the guru to name his successor when it became clear that he would not live. On March 30, 1664, the guru just spoke the words “Baba Bakala” before passing away. It was acknowledged that his granduncle Tegh Bahadur, who resided in Baba Bakala, would succeed him.