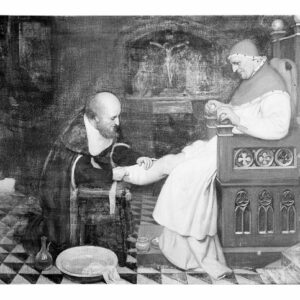 In the Early Middle Ages, Guy de Chauliac was a well-known surgeon. He quickly rose through the ranks of physician and surgeon after getting his Master’s degree in medicine. He was a personal physician to three Popes, in addition to being a well regarded French doctor and surgeon. His famous Latin treatise, “Chirurgia Magna,” explains the fundamentals of surgery and includes topics such as ulcers, anesthesia, plasters, and medications. These were covered in an elaborate’seven-volume’ compilation that was also translated into several languages for other surgeons’ convenience. Aside from his well-known works, Chauliac was also regarded as the “daredevil.” When all other doctors ran in terror, he ventured to treat and serve patients suffering from ‘Pestilences.’ Guy de Chauliac took great delight in being one of the first to define and distinguish between the two sorts of plagues. He was hailed as the “Father of Surgery” and was an example of a surgeon who “bored his torch” with flare and precision.

Guy de Chauliac was born in the little French town of Chaulhac in the Lozere region. He was the only child born to a peasant family in the early 1300s who pursued medicine and developed an interest in the topic from a young age. Chauliac went on to study medicine for the first time in Toulouse, after which he moved to Montpellier, which was the epicenter of medicine during the Middle Ages. Here, he developed his interest in the subject and chose to pursue a career in surgery. He studied and stayed in Paris from 1315 to 1320, following which he got his Master’s of Medicine and Surgery degree in the year 1325.

Following graduation, Chauliac moved to Bologna to study anatomy under Nicola Bertuccio, a well-known figure in the field. Chauliac is claimed to have eschewed using the knife on living individuals after learning the skill of surgery from Bertuccio, instead practicing on dead bodies, including those of the various Popes, for learning and practice.

Chauliac moved permanently from Bologna after being schooled by Nicola Bertuccio and began his career in Lyons. He was ordained as a clergyman at St. Just and pursued his ambitions of becoming a notable physician. He quickly rose through the ranks of the priesthood to become a personal doctor to the various bishops and church members.

He had taken up residence in Avignon, where the majority of the Popes resided and sought refuge. As a result, Chauliac began to offer his medical services to various cardinals, including Pope Innocent VI, Pope Urban V, and Pope Clement VI. As a regular member of the Roman Catholic Church, he was offered the job of ‘Papal clerk’ at the building, as well as the authority to cure these priestly creatures, throughout his time in Avignon.

Avignon was struck by a devastating plague in 1348, which claimed the lives of many of Chauliac’s closest friends. Chauliac was deeply disturbed by the occurrence and wanted to put an end to it once and for all. At a time when other surgeons were fleeing, Chauliac chose to stay and treat those who had contracted the ‘Black Death.’ The Black Death, one of the most destructive contagions of the fourteenth century, was thought to have dramatically reduced the world’s population while also irreversibly altering European history.

Chauliac immediately began treating his patients while also taking note of the disease’s apparent symptoms. The pandemic, according to Chauliac, was separated into two types of devastating plagues: pneumonic plague, which attacked the lungs and respiratory system, and Bubonic plague, which infected the lymphatic system.

The Plague was thought to have started with Jews carrying the disease’s genes. Chauliac, on the other hand, strongly challenged the theory, blaming the Plague on natural phenomena in the atmosphere.

‘Chirurgia Magna’ is a Latin phrase that means “great surgery.”
In the post-pandemic period, Guy de Chauliac’s fame as a physician surged, and barely five years before his death, he began writing and producing a medical’standard’ on surgery in Latin. This was his well-known, published work, which influenced tens of thousands of other surgeons throughout the world. This dissertation, which was written in seven volumes during the medieval period, was the first step toward modern surgery.

It was known as the ‘Chirurgia Magna,’ and it was translated into English, Italian, Hebrew, French, and Dutch, to mention a few. It included all of the fundamentals of surgery, such as anesthesia, blood clotting, surgical tools, nutrition, and the many surgical procedures, such as suturing and intubation. This work was a bold move in the sphere of medicine and contemporary science during the Medieval period. This compilation, which was completed in 1363, was widely used until the early 17th century.

He also placed a strong emphasis on human ‘Anatomy,’ which he saw as a fundamental idea in the field of medicine. In addition to his treatise, he also produced dissertations on astrology, therapies for visual diseases like cataracts, and hernia.

Personal Life Chauliac had a low profile when it came to his personal life, and nothing is known about what he did in his spare time. When he wasn’t working or practicing, Chauliac was supposed to believe in the curative properties of ‘nature,’ and hence spent most of his time investigating ‘Herbalism.’

Guy de Chauliac died in Avignon on July 25, 1368, while the Papal legacy was exiled. For the next three centuries, his famed work, the ‘Chirurgia Magna,’ inspired surgeons and physicians. Despite the fact that many historians and physicians questioned his surgical techniques, he was able to influence a large number of surgeons and doctors all over the world. He was dubbed the “Father of Surgery,” and according to Chauliac, the title was well-deserved.

Guy de Chauliac is also known as Surgeons. His net worth is $5 million.