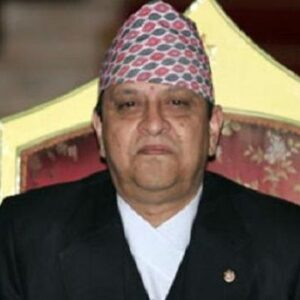 From 2001 to 2008, the monarch of Nepal was Gyanendra Bir Bikram Shah Dev. After his elder brother, King Birendra, was assassinated in a gunshot that killed the majority of his family members, he became Nepal’s 12th king. When the incident happened at the ‘Narayanhiti Royal Palace’ in Kathmandu, Gyanendra was not present. The massacre was carried out on June 1, 2001, by King Birendra’s eldest son, Crown Prince Dipendra, who was severely injured. After Crown Prince Dipendra died of gunshot wounds a few days later, Gyanendra was crowned King of Nepal. The government and Maoist guerilla forces led by Pushpa Kamal Dahal or Prachanda and Baburam Bhattarai fought a civil war under Gyanedra’s reign. From 1996 through 2006, the civil war persisted. During this period, he disbanded parliament and assumed control of the government. He was compelled to hold elections when the war ended, which were won by a coalition of seven political groups. When the monarchy was abolished and the country was changed into a democratic republic, he had to renounce authority.

Gyanendra was born in Kathmandu’s Narayanhiti Royal Palace on July 7, 1947. Crown Prince Mahendra Bir Bikram Shah Dev and Crown Princess Indra Rajya Laxmi Devi had two sons.
Prince Birendra was his older brother, and he had two older sisters, Princess Shanti and Princess Sharada. He also had a younger brother, Prince Dhirendra, and a younger sister, Princess Shobha.
In November 1950, when King Tribhuvan and his entire royal family fled to India afraid for their lives, he became the first King of Nepal. He was left behind, and because he was the sole male member of the royal line in the country, Prime Minister Mohan Shamsher of the Rana dynasty crowned him King of Nepal.
When he returned to Nepal from exile in January 1951, he handed over his monarchy to his grandfather, King Tribhuvan, after a settlement between Nepal and India was reached opposing the Rana dynasty’s authority.
He went to St. Joseph’s College in Darjeeling, India, for his early education. In 1969, he received his bachelor’s degree from Kathmandu’s Tribhuvan University.

Gyanendra was the Chairman of the Advisory Committee that organized his elder brother King Birendra Bir Bikram Shah Dev’s coronation ceremony in 1975.
He was a conservationist who served as Chairman of the ‘King Mahendra Trust for Nature Conservation’ from 1982 until his ascension to the throne in 2001. The ‘National Trust for Nature Conservation’ was the name given to the trust.
By 1999, a civil war had erupted between King Birendra’s administration and the Maoist guerillas commanded by Prachanda.
The massacre of Nepal’s entire royal family on June 1, 2001, remains a source of intense debate. On June 4, 2001, King Gyanendra was sworn in as the King of Nepal when Prince Dipendra, King Birendra’s eldest son, died of bullet wounds acquired during the massacre.
In May 2002, he disbanded the parliament, which had been elected in 1999 and was led by Prime Minister Sher Bahadur Deuba.
He fired Deuba in October 2002 and took complete control of the country, saying that normalcy would return within the next three years.
From 2002 to 2005, he fired three additional Prime Ministers for failing to arrange elections due to the ongoing civil war, and on February 1, 2005, he re-established himself as Nepal’s absolute monarch.
He attempted to re-establish the ‘Constitutional Monarchy,’ which had been dissolved by his elder brother, King Birendra, but faced opposition from all political groups.
During these three years, he used repression and limited civil liberties such as press freedom, censorship protection, and preventive detention, all of which are guaranteed by the constitution. Protests against the repression quickly devolved into violence. On April 21, 2006, Gyanendra consented to hand over the administration to a prime minister chosen by the seven-party alliance after a curfew accompanied by teargas and shooting cost 23 lives.
The seven-party alliance’s Prime Minister, Girija Prasad Koirala, was appointed with the assurance that King Gyanendra would have a say in the cabinet.
King Gyanendra consented to reestablish the parliament on April 24, 2006, after consultations with Koirala.
The political parties disobeyed Gyanendra’s agreement, which was backed by the Indian government. On June 10, 2006, the parliament eliminated all of the king’s powers, including his veto. According to the constitution, the Prime Minister has kingly powers.
On January 15, 2007, the interim parliament was created, and on April 1, 2007, the interim government was formed.
On December 28, 2007, a bill amending the 1990 constitution was passed, transforming Nepal from a monarchy to a federal democratic republic.
On August 23, 2007, all of King Gyanendra’s assets were taken and nationalized, with the exception of those that he had inherited before to becoming king.

Gyanendra married Princess Komal Rajya Laxmi Devi, his second cousin, in Kathmandu on May 1, 1970.
They have two children from their marriage: a boy, Prince Paras, and Princess Prerana.

King Gyanendra Bir Bikram Shah Dev’s total net worth is estimated to be around $58 Million.

His father, King Mahendra, did not look at Gyanendra when he was born since the court astrologer had predicted that he would bring only bad luck.