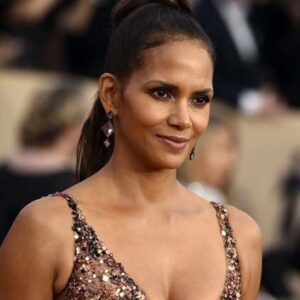 Halle Berry is an actress from the United States who is best known for her role in the film ‘Monster’s Ball.’ Before becoming an actor, she worked as a model and competed in various beauty pageants. Her mixed background explains her uncommon beauty, as she is the daughter of an English-German mother and an African-American father. She began participating in beauty pageants at an early age, confident in her good looks, and won the ‘Miss Teen All-American Pageant.’ After placing first runner-up in the ‘Miss USA Pageant,’ she went on to become a model. Her acting career began with a role in the television series ‘Living Dolls,’ before moving on to films. She was offered a minor role in Spike Lee’s film ‘Jungle Fever.’ She gained the hearts of many people as a result of her passion and commitment to her career. She has a reputation as an artist who pours her whole heart and soul into whatever she creates. Her dedication and hard work enabled her achieve superstardom, a status that had previously eluded female actresses of African descent. Her performance in the film “Monster’s Ball” earned her an Academy Award for “Best Actress” in a Leading Role, making her the first woman of African American origin to do so.

Halle Berry was born in Cleveland, Ohio, to Judith Ann, a psychiatric nurse, and Jerome Jesse Berry, a hospital worker, on August 14, 1966. Her mother was of English and German heritage, and her father was of African American ancestry. She has a sibling who is older than her.

Halle’s father abandoned the family when she was a child, and she was raised in a mostly white neighborhood by her mother. She had to deal with racism as a child.

She graduated from ‘Bedford High School’ and went on to study broadcast journalism at ‘Cuyahoga Community College.’ She was actively involved in extracurricular activities as a student and also served as the class president and head cheerleader.

She competed in various beauty pageants as a teenager, winning ‘Miss Teen All American’ in 1985 and ‘Miss Ohio USA’ in 1986.

In 1986, she was named first runner-up in the Miss USA competition. She decided to drop out of school and pursue a career as a fashion model as a result of her success.

In 1989, she traveled to New York City to pursue an acting career. She faced a lot of difficulties at first, and she even had to stay in a homeless shelter for a bit. ‘Living Dolls,’ a television series, gave her a part. Unfortunately, after 12 episodes, the ‘ABC’ network decided to terminate the show.

In 1991, she made her cinematic debut in Spike Lee’s ‘Jungle Fever,’ in which she played a supporting role. She played a heroin addict named ‘Vivian’ in the film, and her acting skills got her noticed.

In February 1993, she starred in the television miniseries ‘Alex Haley’s Queen,’ which aired in three installments on ‘CBS.’ She was praised for her portrayal of a strong-willed multiracial woman in the series.
In the 1995 film ‘Losing Isaiah,’ she played drug addict ‘Khaila Richards.’ The story follows a cocaine-addicted lady who abandons her baby only to face a lengthy custody fight afterwards.

‘Executive Decision’ (1996), ‘B.A.P.S’ (1997), and ‘Bulworth’ are among her other films from the 1990s (1998).
In 1999, she was cast in Martha Coolidge’s television film ‘Introducing Dorothy Dandridge’ as ‘Dorothy Dandridge.’ She played the first black woman to be nominated for an Academy Award for ‘Best Actress’ in the film. Halle earned multiple honors for her performance in this role.

Halle played ‘Storm,’ a weather manipulator, in the 2000 blockbuster film ‘X-Men.’ The picture was a critical and commercial success.

In 2001, she was cast as ‘Leticia Musgrove’ in the romantic drama film ‘Monster’s Ball,’ which gave her her breakthrough role. Her work in the film was well-received, and she won multiple accolades for it.
She starred as a psychotherapist in the supernatural thriller “Gothika” in 2003, in which her character is accused of murder. The movie was a middling hit.

She went on to star in films including ‘Catwoman’ (2004), ‘Robots’ (2005), and ‘Perfect Stranger’ during the next few years (2007). However, none of these films were successful.
She portrayed ‘Frankie’ in the 2010 film ‘Frankie & Alice,’ in which she represented a lady with dissociative identity disorder who has two alters. For this portrayal, she received multiple nominations and accolades.
‘Cloud Atlas,’ a science fiction picture released in 2012, featured her in various characters. The Wachowskis and Tom Tykwer directed the picture, which starred Tom Hanks, Ben Whishaw, and Jim Broadbent.

In the 2014 blockbuster film ‘X-Men: Days of Future Past,’ she reprised her role as ‘Storm.’ She appeared in the stand-up comedy concert film ‘Kevin Hart: What Now?’ in 2016. The next year, she starred in the film ‘Kingsman: The Golden Circle,’ in which she portrayed an agent.

In the 2017 film ‘Kings,’ she played a working-class mother during the 1992 Los Angeles riots. She starred as ‘Sofia’ in Chad Stahelski’s neo-noir action thriller ‘John Wick: Chapter 3 – Parabellum’ in 2019.

Her most famous performance was as ‘Leticia Musgrove’ in the film ‘Monster’s Ball,’ in which she played a lady whose husband was on death row. This film earned her critical acclaim and established her as one of Hollywood’s most sought-after actors.

One of her most critically lauded parts was in the film “Frankie & Alice,” in which she played a popular real-life stripper and dancer who suffers from dissociative identity disorder.

For her part in the television film ‘Introducing Dorothy Dandridge,’ she received the ‘Primetime Emmy Award’ for ‘Outstanding Lead Actress in a Miniseries or a Movie’ in 1999.

In 1993, she married baseball player David Justice. When her marriage to musician Eric Benet ended in divorce in 1997, she began seeing him and married him in 2001. Her marriage to Benet, however, ended in divorce in 2005.
She had a daughter with model Gabriel Aubry, with whom she was in a relationship. In 2010, she ended her relationship with Aubry.

Halle Berry has a net worth of $90 million.

For her role in the film ‘Catwoman,’ she received the ‘Razzie Award’ (worst actress). She was presented with the prize in person.
In 2003, she was named the ’50 Most Beautiful People in the World’ by ‘People’ magazine.