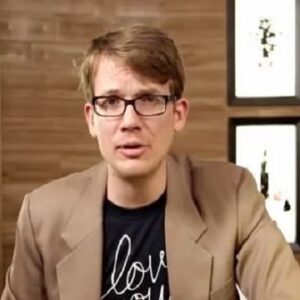 In addition to being a well-known American internet personality, educator, singer, producer, and entrepreneur, William Henry “Hank” Green II is also recognized as John Green’s brother and co-host of the popular YouTube channel “Vlogbrothers.” Additionally, he is well-known for creating and hosting the instructional YouTube channels SciShow and Crash Course. While still in high school, Green began building and designing websites for both himself and nearby businesses. He established the blog “EcoGeek,” which over time grew into a preeminent environmental publication, and routinely contributed to several websites, including “Mental Floss.” The Green brothers became incredibly well-known and well-liked because to their frequent YouTube video postings on their channel “Vlogbrothers.” They later founded the largest web video event in the world, “VidCon,” and “NerdCon: Stories.” Hank has put effort into producing a number of web series for “Pemberley Digital,” including “The Lizzie Bennet Diaries,” a retelling of “Pride and Prejudice” by Jane Austen. DFTBA Records, Subbable, Project For Awesome, and the YouTube shows “Sexplanations” and “The Brain Scoop” are among his other start-up endeavors. Green is a talented musician who over the years has created albums such as “Ellen Hardcastle,” “This Machine PWNS N00bs,” and “So Jokes.”

Mike and Sydney Green welcomed William Henry Green II into the world on May 5, 1980, in Birmingham, Alabama, in the United States. He works on several projects with his brother, John Michael Green, a YouTuber, author, writer, editor, actor, and producer.

His family moved to Orlando, Florida shortly after his birth, where he spent his formative years. He attended Winter Park High School in Florida, where he received his diploma in 1998. In high school and throughout college, he began creating and building websites for both himself and small-town clientele.

He studied at Eckerd College, where he earned a B.S. in Biochemistry. His thesis, “Of Both Worlds: How the Personal Computer and the Environmental Movement Change Everything,” was submitted at the “University of Montana,” where he later attended. There, he received an M.S. in Environmental Studies.

While in Montana, he focused more on developing websites for educational institutions, including his university, as well as environmental non-profit organizations. He started his “EcoGeek” environmental technology blog around this time, which over time grew into a significant magazine.

A number of environmental websites, including “Planet Green,” “The Weather Channel,” “The National Geographic Green Guide,” “Yahoo! Green,” and “Scientific American,” have published his writings.

In the middle of the 2000s, Hank continued to contribute regularly to Mental Floss, a print, internet, and e-commerce media brand owned by Dennis Publishing. The book “Mental Floss: Scatterbrained” was co-written by him.

Hank and his brother John developed the idea for the video blog project “Brotherhood 2.0” and launched it on January 1 of that year, drawing inspiration from “the show with zefrank.”

The idea behind “Brotherhood 2.0” was for the brothers to forego text-based communication for a year and instead communicate through daily vlogs. Through their website and YouTube channel, “Vlogbrothers,” they made these vlogs accessible to the general public.

After accepting the challenge to perform an original song every two weeks, Hank has written, recorded, and performed a number of songs. What Would Captain Picard Do? and I’m Gonna Kill You are two examples of this type of music.

On July 18, 2007, Hank posted a video in which he sang the song “Accio Deathly Hallows,” a reference to the seventh Harry Potter novel. This was their first success as vloggers. The video was the first from the Vlogbrothers to appear on the home page of YouTube.

Project For Awesome (P4A), a YouTube-based community-driven charitable initiative founded by the Green brothers, gives YouTubers the chance to promote their favorite charities by creating creative films that try to raise awareness and money for the organizations.

The Green brothers were encouraged to keep making videos by the success of their vlogs after the ‘Brotherhood 2.0′ project. For their community, they created the website “Nerdfighters,” which was initially administered by Hank.

Currently, films, new projects, and conversations created by the fan community of “Vlogbrothers” are updated daily on the Ningmasters, a team of volunteers of the community update “Nerdfighters.”

Every Tuesday and Friday, the Green brothers post vlogs with a variety of themes, including jokes, idle chatter, Question Tuesdays, and more.

The foundation of the online community “Nerdfighteria” is “Vlogbrothers,” which today boasts of having more than 3 million subscribers. Legal ownership of “Vlogbrothers” belongs to their business, “Complexly.”

The Green brothers met tens of thousands of Nerdfighters at various locations during their nationwide tour in November 2008. At this time, Hank launched his debut album, “So Jokes,” which featured songs with Nerdfighter themes.

Hank and Alan Lastufka co-launched DFTBA Records in 2008, an online store that sells items but was originally founded as a record label. At the moment, its main focus is on marketing products for popular YouTube stars like Hank.

The multi-genre online video conference “VidCon,” which was created by Hank and John, has been hosted annually in Southern California since 2010. The brothers launched NerdCon: Stories, a storytelling-focused gathering, in 2015 after it became the largest convention in the world.

In January 2012, the Green brothers created the educational YouTube channel “Crash Course,” where Hank and John first concentrated on science and humanities courses, respectively. With the addition of other courses like Philosophy, Physics, and Astronomy over time, new hosts including Emily Graslie, Phil Plait, and Craig Benzine joined it.

Bill Gates’ bgC3 awarded money to “Crash Course” after it gained praise from both teachers and students. It joined forces with “PBS Digital Studios” in January 2015 in an effort to start creating more courses. However, the majority of its income comes from patronage on “Patreon.”

He started the science-focused YouTube channel “SciShow” in January 2012, originally hosting it alone before Michael Aranda joined him and occasionally adding Lindsey Doe and Emily Graslie. Due to its popularity, its spin-offs SciShow Space, SciShow Kids, and SciShow Psych all debuted in April 2014, March 2015, and March 2017, respectively.

In 2013, the Green brothers founded Subbable, a monthly subscription-based crowd-funding website that was later purchased by Patreon.

Described as an atheist, Hank has been wed to Katherine Green since 2006. Orin, the couple’s son, was born in October 2016. They are residents of Missoula, Montana.

American entrepreneur, singer, and vlogger Hank Green has a $12 million fortune. In May 1980, Hank Green was born in Birmingham, Alabama. Hank and his brother John Green have a popular YouTube channel together called VlogBrothers. EcoGeek is a blog on environmental technologies that Hank founded.