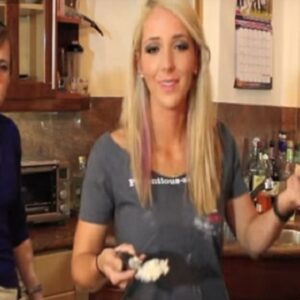 Hannah Hart is a well-known and well-liked YouTuber who has also dabbled in acting, comedienne, and writing. Hannah Hart is the definition of class, and nothing compares to her distinct brand of humor, according to everyone who swears by social media. Her rise to YouTube celebrity began with her episodes of ‘My Drunk Kitchen,’ which earned her over 2.5 million subscribers. Hannah Hart is now known throughout the world for her video content creation talents, offbeat films, and inspirational yet amusing self-help and cooking books. Hannah’s story is unique in that she never sought to be a social media celebrity; in fact, her popular channel was created by mistake! It’s no surprise that her fans and watchers enjoy her sense of humor and don’t hesitate to hit the ‘Subscribe’ button. Have fun binge-watching Hannah Hart’s channel!

Hannah Hart is one of this generation’s most entertaining YouTubers, and if there is a go-to idol for serendipitous YouTube fame, it has to be her! But it’s her road to this magnificent stardom that’s truly remarkable. From a difficult childhood to aspirations of attending the best colleges, she realized that giving up and allowing defeat to win was not an option. But she had no idea that she was about to get a lot more than she bargained for, and that her fate was about to change dramatically.

Hart attempted to record herself cooking while intoxicated while sitting in her sister’s room and speaking with her friend over the webcam one day. Hannah took to YouTube to share the footage after being struck by a lightning bolt of an idea. The video, as luck would have it, went viral! It was dubbed ‘Butter yo shit,’ and it received over 100,000 views in just a few days, prompting her fans to rush her social media with requests for additional ‘episodes.’ Hannah’s unexpected yet greatest career sensation, ‘My Drunk Kitchen,’ catapulted her to timeless renown. Hannah Hart has gone so far as to include chef Jamie Oliver, actress Sarah Silverman, and even singer Lance Bass in her ‘My Drunk Kitchen’ video series, which now have over a billion views.

Hart has achieved global notoriety as a comedienne, actor, and author, in addition to her funny YouTube drunk cooking sessions. Along with her best friends Grace Helbig and Mamrie Hart, she acted in her debut feature film, ‘Camp Takota,’ in 2013. She later went on to star in the film ‘Dirty 30’ with Grace and Mamrie, which was released in September 2016 by Lions Gate Entertainment.

Hannah rose to prominence after the publication of her first parody cookbook, ‘My Drunk Kitchen: A Guide to Eating, Drinking, and Going with Your Gut,’ in 2014. Hannah later wrote a second book, a memoir called ‘Buffering: Unshared Tales of a Life Fully Loaded,’ in 2016, which debuted at #4 on the New York Times Best Seller list. It goes without saying that Miss Hannah Hart has won the hearts of her viewers and followers, and nothing will ever be able to take her down!

You can’t get away from her infectious positive-yet-hilarious feelings that will take over all your blues if you watch her YouTube videos. Hannah was recognized for turning that fairly tragic phase into a funny one, according to one of her films, even though she was growing up in absolute poverty. And, having witnessed this firsthand, she launched the Have a Hart Day campaign, in which volunteers strive to feed, assist, and meet the needs of underprivileged families all over the world.

Hannah Hart just announced her lesbian identity on social media. Ingrid Nilsen, a YouTuber and Project Runway judge, acknowledged her relationship with her in 2015. Unfortunately, the couple’s fairytale romance came to an end in mid-2016.

Hannah Maud Hart was born in Colorado Springs, Colorado, on November 2, 1986. Her parents are unknown, but she has two sisters named Naomi and Maggie (half-sister). Hart earned two degrees from the prestigious UC Berkeley, one in English literature and the other in Japanese language. She even spent a few years in Japan before relocating to Los Angeles, where she currently resides. Her YouTube channel is all about never letting life’s low points define you, and it’s no surprise that she has over 2.5 million fans!