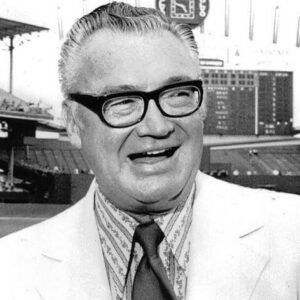 Harry Caray was a well-known American radio and TV host who talked about baseball. He learned more about broadcasting during his time as the sports editor and news director for WKZO in Kalamazoo. As a broadcaster for the St. Louis Cardinals on KMOX-TV and Radio, his innovative way of talking about baseball games got him a lot of attention. He came up with his own style of broadcasting by being honest about how he liked or didn’t like how the players did. During his time as a Chicago Cubs announcer, the team’s TV channel, WGN, became one of the best in the United States. Harry got the Ford Frick Award for his work in broadcasting. When he worked for the White Sox, he did a lot to make sure that the song “Take Me Out to the Ball Game” was played during the seventh-inning stretch. He was also the announcer for the Missouri Tigers football team, the St. Louis Billikens basketball team, and the St. Louis Hawks basketball team in the 1950s and 1960s. Besides that, he also did radio broadcasts of eight Cotton Bowl Classic games. He worked in radio and TV, and he also ran a restaurant called Harry Caray’s.

He played baseball at a semipro level for a short time. As a baseball player, he was so good that the University of Alabama gave him the scholarship to play sports there. But he decided not to take the money.

Instead, he planned to play baseball for the St. Louis Cardinals, a team in St. Louis, Missouri. He tried to become a professional baseball player, but it didn’t work out.

Merle told him to get a job as an announcer at WJOL in Joliet, Illinois, and he did. Later, he became the sports editor and news director at WKZO in Kalamazoo, Michigan, where he worked with well-known radio host Paul Harvey.

He worked for the St. Louis Cardinals for 25 years before he was fired from his job in 1969. After that, he worked for one season as a radio announcer for the Oakland Athletics.
In 1971, he went to work for WFLD in Chicago as the White Sox’s announcer. He worked at Comiskey Park, where the Chicago White Sox played from 1910 to 1990, for eleven seasons.

During this time, he used to sing the popular song “Take Me Out to the Ball Game,” which has come to be associated with baseball. In 1977, he began broadcasting with Mary Shane, who was the first woman to call a baseball game.

Even though he was praised for his work as a Chicago White Sox broadcaster, the team’s owner wanted to fire him because of how he talked about the players. But the team changed hands, and Harry eventually quit because he didn’t get along with the new owners.

After he left the Chicago White Sox in 1982, he went to work for WGN-TV to talk about the Chicago Cubs. While he was working for them, his style of broadcasting was known all over the country.

It is known that he was fired from his job as an announcer for the St. Louis Cardinals in 1969 because he had an affair with the son-in-law of the team’s owner, August A. Busch, Jr.

On February 14, 1998, he had a heart attack while eating dinner with his family. The attack hurt his brain. After a few days, he passed away.

Harry is one of the wealthiest sportscasters and is on the list of the most well-known sportscasters. Based on what we’ve learned from Wikipedia, Forbes, and Business Insider, Harry Caray is worth about $1.5 million.

This successful baseball announcer was very proud to work in the same booth with his son Skip Caray and grandson Chip Caray during a game on May 13, 1991.