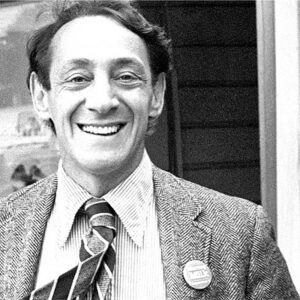 Harvey Bernard Milk was an icon for the gay community in the United States and a proponent of the Lesbian, Gay, Bisexual, and Transgender (LGBT) civil rights movement. He was America’s first openly gay politician. He was born in New York and relocated to San Francisco during a wave of gay men that flocked to the city. In San Francisco, the climate was more favorable to the homosexual rights movement, and he became more involved in local politics. He kept his sexual orientation a secret during his early years, but eventually came out of the closet after realizing that as an openly gay politician, he would be able to do more for the LGBT community. He was elected as a city supervisor after three unsuccessful campaigns for political office. His election made national headlines because he was the first openly gay candidate to be elected in the country. When he initially took office, one of the first things he did was introduce a civil rights bill that made discrimination based on sexual orientation illegal—a huge step forward for the LGBT community’s civil rights. Because of his compassion for the people, he became a very popular politician. He was unfortunately killed after only 11 months in office.

William Milk and Minerva Karns raised him as a Jew. His family had a business.
He graduated from Bay Shore High School in 1947. While there, he discovered opera and football. He was gay, but he kept it hidden from his peers at school and college.
The New York State College for Teachers, where he majored in mathematics, he graduated in 1951. He was a popular, outgoing student.

During the Korean War, he served in the US Navy. He left the Navy in 1955 as a lieutenant junior grade.
He taught at George W. Hewlett High School. Dissatisfied with his career, he worked as a stock analyst and a Wall Street investment banker.

In 1972, he went to San Francisco with Scott Smith. During that time, San Francisco had the most gays. They opened Castro Camera. Milk was a kind person who was well-known in his community. He wanted to help others and thus entered politics.

He ran for the San Francisco Board of Supervisors in 1973 but lost. In 1974, he ran for president again and lost, but he had gained popularity and public support.
He was affectionately known as the ‘Mayor of Castro Street’. He was elected to the San Francisco City-County Board in January 1978, being the first openly gay person elected to public office in the United States.
He began by sponsoring a civil rights measure that prohibited discrimination based on sexual orientation. The majority of the people, notably the LGBT community, greeted this with joy. Only one of his coworkers, Supervisor Dan White, objected, citing the collapse of established conventions.

He urged LGBT people to come out and vote. He believed that visibility was vital to build support for the LGBT civil rights movement and educate the public about LGBTQ concerns.
He also focused on another major neighborhood issue, pet dog waste left on the pavements. Souping pet excrement was a city ordinance he helped write.

He cared about the wellbeing of the entire society, not just the LGBT group. He advocated for less expensive child care, free public transit, and a civilian oversight board for the police.

As a Supervisor, he voted against the Briggs Initiative, which would have prohibited LGBT people from working in public schools. He was a gay icon and civil rights pioneer who paved the way for many gay rights leaders today.

In 2009, he was posthumously given the Presidential Medal of Freedom for his contributions to the homosexual rights movement.

He came out as gay in his adolescence. He dated men like Craig Rodwell, Joe Campbell, and Scott Smith.
Dan White, a fellow Supervisor, was one of his political foes. He hated Milk’s policies and activities and killed him on November 27, 1978.
Milk’s life has been the subject of books, plays, and films.

Harvey is one of the wealthiest civil rights leaders and one of the most well-known. Harvey Milk’s net worth is estimated to be $1.5 million, according to Wikipedia, Forbes, and Business Insider.