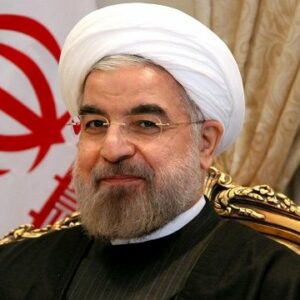 Hassan Rouhani is a seasoned politician and a Muslim clergyman who serves as Iran’s seventh President. Following the Iranian Revolution, he held several prominent government positions. He was the fourth and fifth Deputy Speaker of Iran’s ‘Majlis’ (Parliament). He is a member of Iran’s ‘Supreme National Security Council,’ ‘Expediency Council,’ and ‘Expert Assembly.’ As Secretary of the ‘Supreme National Security Council,’ he was a pivotal figure in Iran’s nuclear technology negotiations with Germany, France, and the United Kingdom. He is a supporter of religious minorities’ and other racial groups’ rights. Hassan Rouhani, a moderate and reformer, has resurrected Iran’s diplomatic relations with other nations through conciliatory letter exchanges. His presidency saw the appointment of women to the positions of Vice President and spokesperson for the Iranian foreign ministry, thereby promoting women empowerment. Additionally, he promotes individualism and the right to information. Apart from his government positions, he has also held a number of academic positions. In 2013, he was ranked ninth on Time magazine’s list of the ‘World’s Most Influential People.

He was born Hassan Fereydoun on November 12, 1948, in Sorkheh, Semnan Province, Iran, to Haj Asadollah Feridon and Sakineh Peivandi. He later changed his surname to Rouhani, which means clerics’ community.

His father ran a spice business in Sorkheh and was a political opponent of Iran’s Shah, facing several arrests prior to the 1979 Iranian Revolution.

He began his religious studies in 1960, when he enrolled in the ‘Semnan Seminary.’ He enrolled in the ‘Qom Seminary’ in 1961. He received guidance from a number of distinguished Shia scholars, including Mohammad Fazel Lankarani, Mohammad Mohaghegh Damad, and Mohammad-Reza Golpaygani.

After 1965, he toured the country, voicing his opposition to the Shah and advocating for exiled cleric Ruhollah Khomeini. He was arrested several times and was barred from making public statements. He enrolled at the ‘University of Tehran’ in 1969 and graduated with a bachelor’s degree in judicial law in 1972.

In 1973, he enlisted in the Nishapur military. He was forced to flee Iran in 1977. He moved to Paris and interacted with Iranian student groups throughout Europe after joining Ruhollah Khomeini.

He returned to Iran in 1979 with Ruhollah Khomeini to assist in rebuilding the government and organizing the army and military bases.

In 1980, he was elected to Iran’s ‘Majlis’ (Parliament). He served in various capacities in the ‘Majlis’ for the next two decades. For the first two terms, he served as chairman of the Defense Committee. He served as Deputy Speaker and Chairman of the Foreign Policy Committee during his fourth and fifth terms.

He served as chairman of the supervisory council of ‘Islamic Republic of Iran Broadcasting’ from 1980 to 1983. He held a variety of positions during the Iran-Iraq war. From 1982 to 1988, he was a member of the ‘Supreme Defense Council.’

From 1986 to 1988, he served on the ‘High Council for Supporting War’ and chaired the Council’s ‘Executive Committee.

In May 1986, as part of the ‘Iran-Contra affair,’ which involved selling arms to Iran, Robert C. McFarlane, then-American President Ronald Reagan’s ‘National Security Advisor,’ visited Tehran. Rouhani was one of three Iranians who met with McFarlane.

His contributions to the Iran-Iraq war were recognized, and he received the second-grade ‘Fath Medal’ and the first-grade ‘Nasr Medal’.

From 1989 to 1997, he served as President Akbar Hashemi Rafsanjani’s ‘National Security Advisor.’ He has been the director and research professor of the ‘Center for Strategic Research’ since 1991. He is the author of numerous books and articles in Arabic, Persian, and English.

He has been a member of the ‘Expediency Council’ since 1991 and currently serves as chairman of the Council’s Political, Defense, and Security Committee.

Hassan Rouhani ran for and won the June 2013 presidential election. On August 4, 2013, he was sworn in as the country’s seventh president at the ‘House of Parliament.’ Eshaq Jahangiri was appointed vice president by him.

He is an advocate for women’s rights, and his regime saw the appointment of three female vice presidents, Shahindokht Molaverdi, Masoumeh Ebtekar, and Elham Aminzadeh. Marzieh Afkham continues to serve as Iran’s first foreign ministry spokesperson under his administration. He is also committed to establishing a women’s ministry.

On the economic front, he is concerned with reining in inflation, bringing down high unemployment, and boosting purchasing power.

He has attempted to reestablish Iran’s diplomatic relations with other nations, sending conciliatory letters to the leaders of six countries, including the US President.

The two nations agreed to resume diplomatic relations following his meeting with British Prime Minister David Cameron. While the ‘Iranian Embassy in London’ was restored in February 2014, it was not reopened officially until August 23, 2015.

He paid a visit to New York City in September 2013 and spoke on the phone with US President Barack Obama on September 27, 2013. It was the first meeting of high-level politicians between the two countries since 1979.

His government signed numerous agreements with Iraq and was the first to offer assistance following the inception of the ‘Islamic State of Iraq and the Levant’ (ISIL) and associated forces’ ‘Northern Iraq offensive’ against the Iraqi government. Iran played a significant role in the military operation against ISIL.

He is the managing editor of the quarterly journals ‘Foreign Relations,’ ‘Iranian Review of Foreign Affairs,’ and ‘Rahbord,’ which are published in both English and Persian.

He is married to his cousin Sahebeh Arabi, and the couple has three children. Hossein Fereydoun, his brother, is also a politician who has served in various capacities, including governor of Karaj and Vice Minister of Intelligence.

Hassan Rouhani is an Iranian political who has a net worth of $500 thousand dollars. Hassan Rouhani was born Hassan Fereydoun in Sorkheh, Semnan Province, Iran in November 1948.

Rouhani is the 7th President of Iran and has served since 2013. He graduated from the University of Tehram and earned a law degree and a Ph.D.