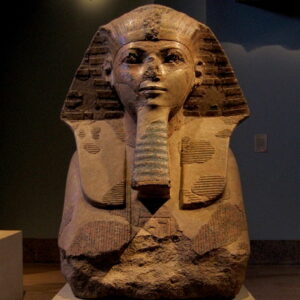 Hatshepsut was one of Egypt’s ancient monarchs and is credited with being the country’s first female Pharaoh. She did, however, strive to keep the kingdom’s tradition alive by dressing in a manly manner, giving the impression that the kingdom was still ruled by a man. She reigned for a little more than two decades and was responsible for a number of key changes that paved the path for tremendous economic progress. One such significant step was the improvement of connectivity between various locations, which resulted in a rise in trade. Hatshepsut is also credited with initiating the construction of several sculptures and monuments, which resulted in the development of incredible works of art over time. The pharaoh popularized her rule by having her portraits carved into the walls of structures, which was rare at the time. Although few sources indicate that her foreign policy was based on keeping friendly relations with states, others said that she used military force to conquer neighboring countries such as Syria. This female Pharaoh’s reign is one of the best illustrations of how a woman’s leadership qualities may sometimes even outshine those of a man. Continue reading to learn more about her life and work.

Hatshepsut was the daughter of an Egyptian pharaoh named Thutmose I and one of his wives, Ahmose.
Her father died while the princess was only twelve years old. Circumstances forced her to marry Thutmose II, another of his father’s children from a second marriage.

The wedding was held to keep the younger generation from becoming involved in a courting outside of the royal family. Hatshepsut’s ascension to the throne was aided by her marriage to her half-brother.

Thutmose II died while the Queen was only 30 years old, after reigning for 15 years. The couple lacked a male heir to the throne, and the royal family was troubled by the question of who would succeed them. Despite the fact that Thutmose II had a male kid with Isis, he was only a baby.

The queen handled the situation by resolving to take over as king in place of her husband until Thutmose III, the newborn, reached an advanced age. Her nephew Thutmose III, on the other hand, is thought to have remained a co-ruler for the remainder of his life, never gaining entire control of the throne.

Hatshepsut’s main job after succeeding her husband Thutmose I was to ensure that her kingdom’s economy thrived. One of the first things she accomplished was to improve Egypt’s commerce network, which had been underdeveloped throughout her predecessors’ reigns.

Paths were built to provide connectivity between surrounding towns and cities, assisting in the development of the Egyptian economy.

Hatshepsut is also thought to have tried and succeeded in invading Syria and ancient African kingdoms such as Nubia with her armed forces during her early reign.

Another important task that the female Pharaoh performed was to improve the infrastructure in her empire, which primarily consisted of erecting new structures. Hundreds of houses were built throughout Egypt during the reign of this female Pharaoh.

The ruler had enlisted the services of Ineni, a well-known architect, to produce incredible works of art. During her tenure, she restored an ancient historical site known as the ‘Precinct of Mut,’ which was devoted to the Egyptian goddess Mut. Her highness had even had two Obelisk structures erected in this temple in her honor.

The Pharaoh’s religious inclination prompted her to concentrate on the construction of the ‘Djeser-djeseru’ temple, which later served as the Pharaoh’s funerary. The temple was noted for its majestic colonnaded construction, which is still regarded as a classic piece of architecture.

The Pharaoh is also supposed to have built numerous monuments in the ancient temple site of ‘Karnak,’ which is located to the south of Cairo today.

Another popular myth about Hatshepsut is that she advertised her administration’s successes by inscribing drawings on the different monuments that were built during her reign.

The female Pharaoh is thought to have died in 1458 BC and was incinerated at a site known as ‘KV20,’ which was also the same location where her father Thutmose I was interred. Thutmose III replaced the female Pharaoh, who had reigned for more than two decades.

Hatshepsut is supposed to have begun preparing her burial location long before her death, even while her husband was still alive.

When Thutmose III, Hatshepsut’s successor, came to the conclusion of his reign, the ruler’s son made numerous attempts to destroy all of Hatshepsut’s historical fats and records. Erasing information about the female Pharaoh from the walls of her time’s monuments was one of the activities.

Researchers discovered archaeological remains at the Karnak temple complex in 2006 that are thought to be those of this female Pharaoh and her successor Thutmose III.

During the reign of the Pharaoh, many statues were erected, the most of which were designed by the architect Ineni. Many of these works are still on display at the ‘New York Metropolitan Museum of Art.’

The Pharaoh was said to have continued to wear a fake beard and wear a kilt until the end of her reign, giving the impression that she was not a woman.