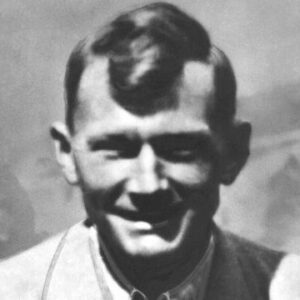 Heinrich Harrer was an Austrian mountaineer who was a member of the first team to summit the Eiger’s daunting north wall in Switzerland. He was also a well-known athlete, geographer, and author, best known for his works “Seven Years in Tibet” and “The White Spider,” the latter of which was adapted into a Hollywood film. Harrer spent his life exploring the world’s highest peaks and leading ground-breaking excursions to Alaska, the Andes, and Uganda’s Mountains of the Moon, among other exotic mountain ranges. He grew up in Hüttenberg, Austria, in a humble household with a passion for exploration. As a young man, he understood that mountain climbing was his genuine love, and with the first ascent of the Eiger North Face, he gained his first great accomplishment as a climber. During World War II, he was captured by the British as a prisoner of war while exploring the territory near Nanga Parbat. He made good on his escape and traveled to Tibet, where he eventually served as a tutor and friend to the Dalai Lama. After seven years, he returned to Austria and resumed his mountaineering exploits.

Heinrich Harrer, the son of a postal worker, was born on July 6, 1912, in Hüttenberg, Austria. At a young age, he developed an interest in skiing and mountaineering. From 1933 to 1938, he studied geography and athletics at Graz’s Karl-Franzens University. He was selected to compete in the 1936 Winter Olympics in Garmisch-Partenkirchen in the Alpine skiing competition, but the Austrian Alpine skiing team boycotted the event for various reasons. At the World Student Championships in Zell am See in 1937, he won the downhill race.

Harrer joined the Schutzstaffel when Germany occupied Austria in March 1938. (SS). He was a member of the Nazi Party and attained the rank of Oberscharführer (Sergeant). Heinrich Harrer and his companion Fritz Kasparek decided to climb the Eiger’s North Face (3,970 m, 13,025 ft) in the Bernese Alps of Switzerland, which had never been climbed before. Many other mountaineers had died attempting to reach the peak, so it was a highly perilous mission.

The two men began their ascent in July 1938. Harrer and Kasparek encountered German mountaineers Ludwig Vörg and Anderl Heckmair halfway up the mountain, who were also attempting the climb. Heckmair was chosen as the team’s leader after the four decided to create a group.

The ascent was perilous, with snow avalanches and rock falls posing frequent dangers to the four men. They persevered, determined to complete the challenge, and on July 24, 1938, they reached the summit. Their incredible achievement brought them international attention.

Harrer joined a four-man trip to the Diamir Face of the Nanga Parbat in 1939, buoyed by the successful summit of the North Face of the Eiger. The team, commanded by Peter Aufschnaiter, was looking for a faster way to the summit. The mountaineers flew to Karachi, Pakistan, from where they planned to begin their quest. Around this time, World War II was begun, and the crew was captured and held in Dehradun for a few years alongside thousands of other enemy foreigners on September 3, 1939. Aufschnaiter and Harrer tried multiple times to flee but were recaptured each time.

Harrer and Aufschnaiter, along with a few others, were finally released from captivity on April 29, 1944. After months of struggle, the two proceeded into Tibet and arrived in Lhasa, Tibet’s capital, in January 1946. Harrer was well-liked in Tibet, and he was hired by the Tibetan administration. He worked as a Court photographer as well as a foreign news translator.

He quickly became acquainted with the 14th Dalai Lama and tutored him. The Dalai Lama was a 14-year-old boy at the time. Harrer developed a strong bond with his student, whom he found to be a quick learner. The two talked about a wide range of topics, including Soviet politics, Buddhism, and Western science.

In 1962, he led a party of four climbers to the summit of Papua Indonesia’s Puncak Jaya (Carstensz Pyramid) (4,884 m, 16,024 ft), Oceania’s highest peak. He wrote almost 20 books about his exploits, many of which became international bestsellers, and directed around 40 documentaries. He was also a talented photographer who is acknowledged with capturing some of the best images of Tibetan culture.

Heinrich Harrer’s book “Seven Years in Tibet: My Life Before, During, and After the Second World War,” based on his real-life experiences in Tibet between 1944 and 1951 during WWII, became a New York Times bestseller and was translated into 53 languages. In 1997, a biographical war drama film featuring Brad Pitt as Harrer was released.

In 1982, he was awarded the Austrian Cross of Honour for Science and Art, 1st class, as well as the Grand Merit Cross of the Federal Republic of Germany’s Order of Merit. For his efforts to bring the situation in Tibet to public light, he received the International Campaign for Tibet’s Light of Truth Award in 2002.

Heinrich Harrer was married three times. His first marriage, to Lotte Wegener, was in 1938, and he had a son with her. The union was later annulled. Margaretha Truxa, whom he married in 1953, died in 1958. In 1962, he married Katharina Haarhaus for the third and final time.
At the age of 93, he died on January 7, 2006.

Heinrich is one of the wealthiest novelists and one of the most well-known novelists. Heinrich Harrer’s net worth is estimated to be $12 million, according to Wikipedia, Forbes, and Business Insider.

This world-famous mountaineer was also a fantastic golfer, winning Austrian national championships in 1958 and 1970.