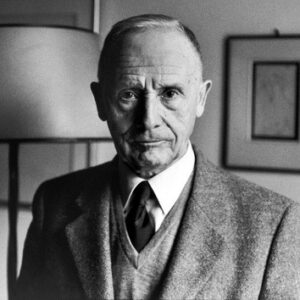 Henri Cartier-Bresson was a photographer from France. He benefited from his upbringing in a bourgeois family by being able to indulge in the arts. He had a Box Brownie as a kid, which he used to take holiday photos with. He would later purchase a Leica camera with a 50 mm lens. At Paris, he enrolled in the Lhote Academy of Cubist painter and sculpture André Lhote. He studied English, art, and literature at the University of Cambridge. He then served in the French Army for the remainder of his mandatory service. He was a Corporal in the Film and Photo unit during WWII. He was kidnapped by German forces and held captive for 35 months in Nazi POW camps. He focused on the throng lining the London streets when King George VI and Queen Elizabeth were crowned. He formed Magnum Photos with David “Chim” Seymour and Robert Capa, with whom he collaborated. He was tasked with missions in India and China. He photographed Mahatma Gandhi approximately 15 minutes before he was assassinated in India. He was the first Western photographer to photograph “freely” in the postwar Soviet Union and documented the Chinese Civil War. With his wife and daughter, he established the Henri Cartier-Bresson Foundation to protect and share his legacy.

Henri Cartier-Bresson was born on August 22, 1908, in Chanteloup-en-Brie, Seine-et-Marne, France. His father was a prosperous textile producer, while his mother’s family were Normandy cotton traders and landowners.
Henri had a Box Brownie that he used to take holiday photos with. Later on, he tried using a 34-inch view camera. His parents nurtured him in the manner of a classic French bourgeois.

He went to the Catholic school École Fénelon. Oil painting was introduced to him by his uncle Louis. When his uncle died in World War I, his painting studies were cut short.

Cartier-Bresson enrolled at Lhote Academy in Paris in 1927, the workshop of Cubist painter and sculptor André Lhote. He studied both classical and contemporary painters. He also studied painting with Jacques Émile Blanche, a portraitist.

Cartier-Bresson studied English, art, and literature at the University of Cambridge from 1928 to 1929, and became bilingual. He then served in the French Army for his mandatory service, stationed at Le Bourget.
His aviation squadron commandant put him under house arrest in 1929 for hunting without a permit. Harry Crosby, an American expatriate, persuaded the officer to release Cartier-Bresson. They spent time photographing and printing.

He traveled to the French colony of Côte d’Ivoire. He made a living by hunting and selling game. He had a camera with him. Only seven photos, however, made it through the tropics.

In late 1931, he returned to France and intensified his contact with the Surrealists. Martin Munkacsi, a Hungarian photojournalist, pushed him to pursue photography professionally after seeing his work.

In Marseilles, he purchased a Leica camera with a 50 mm lens. He painted its shining portions black to ensure anonymity and overcome his victims’ stiff and artificial conduct.

When he returned to France, he sought out Jean Renoir. In Renoir’s “Partie de champagne” and “La Règle du jeu,” he played a role. He assisted Renoir in making a film about France’s 200 ruling families.

For the French weekly Regards, he covered King George VI and Queen Elizabeth’s coronation in 1937. He concentrated solely on the people lined the London streets. “Cartier” was his photo credit.

Between 1937 and 1939, he worked as a photographer for Ce Soir, the nightly newspaper of the French Communists. He was a socialist, although he did not join the Communist Party of France.

During World War II, he joined the French Army as a Corporal in the Film and Photo section. He was kidnapped by German forces in 1940 and endured 35 months in Nazi POW camps.
He was sentenced to solitary imprisonment after attempting to flee the prison camp twice. He hid on a farm in

Touraine and proceeded to France with bogus papers after succeeding on his third attempt.
He went underground in France, supported other fugitives, and collaborated discreetly with other photographers to cover the Occupation and eventually the Liberation of France. He discovered his buried Leica camera in 1943.

During the Chinese Civil War in 1949, he covered the last six months of the Kuomintang and the first six months of the Maoist People’s Republic. In Beijing, he also photographed the remaining Imperial eunuchs.
In 1955, Cartier-Bresson staged his first show in France at the Louvre’s Pavillon de Marsan. In the postwar Soviet Union, he was the first Western photographer to photograph “freely.”

In 1966, Cartier-Bresson left Magnum as a principal. He stopped photographing and went back to drawing and painting. In New York, he had his first drawing exhibition at the Carlton Gallery.

“The Photographs of Henri Cartier-Bresson” was published in 1947 by Cartier-Bresson. He created Magnum Photos, a cooperative picture agency owned by its members, with Robert Capa, David Seymour, William Vandivert, and George Rodger.

Magnum was dispatched to India and China as part of his mission. He became famous for his portrait of Gandhi taken 15 minutes before he was shot dead, as well as his coverage of Gandhi’s funeral in India in 1948.

“Images à la sauvette” was published by Cartier-Bresson in 1952. “The Decisive Moment” was the title of the English edition. A portfolio of 126 of his photographs was featured. The cover was designed by Henri Matisse.

From 1948 to 1964, Cartier-Bresson won the Overseas Press Club of America Award four times. The A.S.M.P. Award and the Prix de la Société Française de Photographie were also given out at the time.

In 1929, Cartier-Bresson supported Crosby and his wife Caresse’s unrestricted sexuality. He and she had a passionate sexual relationship. Two years after Crosby’s suicide, his affair ended in grief.

He married Ratna Mohini, a Javanese dancer, in 1937. After 30 years of marriage, they divorced. He married Magnum photographer Martine Franck three years later. Mélanie was the couple’s only child.

With his wife and daughter, he founded the Henri Cartier-Bresson Foundation in 2003 to conserve and share his legacy.

On August 3, 2003, he died in Montjustin, France, and was interred in the local cemetery.

This photographer contracted blackwater sickness and ordered his grandfather to bury him in Normandy while Debussy’s String Quartet was being performed. His grandfather, according to his uncle, thinks it pricey and prefers that he return first.