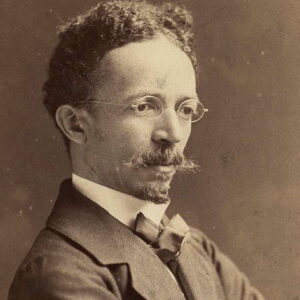 Henry Ossawa Tanner was a painter of African descent. He grew up in a religious family and had an interest in painting as a youngster. He achieved international acclaim for his ability to render landscapes and biblical themes. He went to Paris whilst on a trip of Europe. The artistic world of Paris drew him in because it was devoid of racial discrimination. For a short time, he trained under great academic painters such as Jean-Paul Laurens and Benjamin Constant. His early paintings, such as ‘The Banjo Lesson’ and ‘The Thankful Poor,’ show how realist artist Thomas Eakins influenced him. Through its simplistic drawing technique, his ‘The Banjo Lesson’ denotes knowledge sharing. The majority of his well-known works depict black people in their daily lives, and each of his pieces portrays black people in a respectable manner. His travels to areas such as Tangier and the Holy Land inspired him to paint holy works. ‘Daniel in the Lions’ Den’ is one of his religious paintings. ‘The Disciples See Christ Walking on the Water’ is a painting that reflects his photographic sensibility. He received various significant awards as an artist, including the Order of the Legion Honor.

When he was a child, his family relocated to Philadelphia. He went to the Robert Vaux School for his education. Later in life, he attended a number of African-American schools where he studied liberal arts.

He has always been drawn to the arts, even as a child. He wanted to be a painter since he was a child. Furthermore, his poor health forced him to spend

most of his time at home, which he used to draw.

In 1876, he painted harbor vistas, landscape portraits, and numerous creatures that he observed in the Philadelphia zoo. In 1880, he enrolled at the Pennsylvania Academy of the Fine Arts after his recovery.

There, he studied under Thomas Eakins, a well-known American sculptor and realism painter who had a significant influence on Henry’s life and work.

The Career of Henry

Henry came to Atlanta, Georgia to teach art after finishing his studies. He was a professor at Clark University at the time. He attempted but failed to create a photographic studio at the time.

He showed some of his works in Cincinnati with the help of Bishop Joseph C. Hartzell. In 1891, under the sponsorship of that bishop and Mrs. Hartzell, he embarked on a tour of Europe.

In the same year, he traveled to Paris and had a life-changing experience. He was enthralled by France’s artistic world, which was far more evolved than America’s. He made the decision to spend the rest of his life in Paris.

He went to the Academie Julian, a prestigious art school in Paris. Blue and blue-green were prominent in the majority of his paintings during the period. During this time, he also began to use the artistic technique of light and shade.

In 1893, he returned to the United States to speak at the World’s Columbian Exposition in Chicago about African Americans and art. While in Philadelphia that year, he composed one of his most famous pieces, ‘The Banjo Lesson.’

He emphasized the importance of black entertainers in American culture with this work. He wrote ‘The Thankful Poor’ the next year. He exhibited his paintings at the annual Paris salon this year.

He was given an award in 1896 for his painting ‘Daniel in the Lions’ Den,’ which illustrates the biblical theme of the “Old Testament.” He created ‘The Annunciation’ in 1898.

An article about Tanner was written in 1899 by Booker T. Washington, an African-American educator, and author. The publishing of this piece was essential in obtaining him a prominent place in the American art industry.

During that time, he had a number of shows in Philadelphia, Boston, New York, Chicago, and other art centers in the United States. One of the astonishing creations he drew in 1905 was ‘Abraham’s Oak.’

He also created ‘The Two Disciples at the Tomb’ in the same year. In 1908, he organized a solo display at the American Art Galleries in New York for his religious paintings.

In the picture ‘Birthplace of Joan of Arc at Domremy-la-Pucelle’ from 1918, he expertly portrayed the image of sunlight. In 1925, he was depicted as a representative of African-American creative people in the African-American newspaper “The Crisis.”

In 1893, he completed his masterpiece, ‘The Banjo Lesson.’ The illustration depicts a small boy learning to play the banjo from an elderly gentleman. The photograph is extremely commendable, especially in terms of its effective use of light and shade.

He painted ‘The Raising of Lazarus,’ a biblical-themed painting, in 1897. In the same year, this piece of art was awarded a medal in the Paris Salon.

In 1900, the Pennsylvania Academy of Fine Arts awarded him the Lippincott Prize for his piece ‘Nicodemus Visiting Jesus,’ which he completed in 1899. The meeting between Jesus and Nicodemus, a biblical figure, is depicted in this picture.

In 1899, he married Jessie Olsen, an opera soprano from the United States. Jesse Ossawa Tanner, their son, was born in 1903. Tanner died in his Paris apartment.

He achieved international acclaim for his ability to render landscapes and biblical themes. He has an estimated net worth of $8 million.