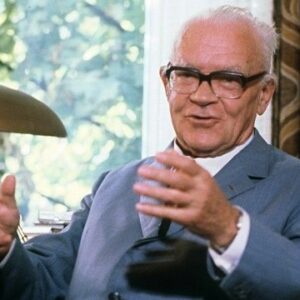 Herbert C. Brown was an American chemist born in England who shared the Nobel Prize in Chemistry in 1979 for his work on organoboranes. He made several significant contributions to organic chemistry, particularly organoboron or organoborane chemistry. He was born in London to Jewish immigrants and migrated to America with his family when he was a toddler. From a young age, he was a brilliant student who acquired a voracious reading habit. During his high school years, he was forced to drop out due to an unpleasant tragedy, but the persistent young man persevered and graduated. During the Great Depression, more problems arose, but Brown persevered and received a B.S. in 1936, followed by a doctorate two years later. He was now married and looking for work, but he couldn’t find anything suitable. As a result, he was forced into a post-doctoral fellowship and began his chemistry study, which eventually led to his seminal work on organoboranes. In his laboratory, he collaborated with Hermann Irving Schlesinger, and the two men made key findings for the National Defense Research Committee. Brown retired in 1978 after spending the majority of his academic career at Purdue University in West Lafayette, Indiana.

Herbert Brovarnik was born on May 22, 1912, in London, England. Charles Brovarnik and Pearl Gorinstein, his parents, were born in Zhitomir, Ukraine, and immigrated to London in 1908. He was the youngest of three sisters.
In 1914, his family immigrated to the United States, where his father established a small hardware store. Herbert attended the Haven School, where he excelled academically. After that, he attended Englewood High School, but was forced to abandon out due to his father’s unexpected death in 1926.

He attempted to run his father’s business but quickly found that it was uninteresting to him. As a result, he went back to school and graduated in 1930. Brown was unemployed at the time due to the Great Depression, and he was unable to find work. As a result, he opted to continue his schooling.

He intended to focus in electrical engineering, but chemistry quickly piqued his attention. In 1933, he had barely finished his first semester at Crane Junior College when the school was forced to close due to a shortage of money. After that, he attended to night school at the Lewis Institute and took odd jobs to supplement his income.
During this period, one of his Crane lecturers offered his laboratory to a group of students who wanted to continue their study. Brown, along with a few others, conducted experiments there.

In 1934, he enrolled at Wright Junior College and graduated in 1935. He then enrolled at the University of Chicago on a half-scholarship in the fall of 1935 and graduated with a B.S. in 1936. He subsequently went on to finish his doctorate in 1938.

Herbert C. Brown, now married, began seeking for an industrial job but was unable to locate one. Professor M.S. Kharasch offered him a post-doctoral position with a $1600 stipend at this time, which he accepted.
Professor Schlesinger invited Herbert C. Brown to become his research assistant with the status of instructor at the University of Chicago in 1939. For the National Defense Research Committee, the couple began their research on volatile, low molecular weight uranium compounds.

They were able to synthesis volatile uranium (IV) borohydride with a molecular weight of 298 as a result of their collaboration. They also discovered that lithium hydride interacts with boron trifluoride in ethyl ether, allowing them to make diborane in higher amounts.

Brown and Schlesinger devised a method for manufacturing sodium borohydride (NaBH4), which may be used to make boranes, during World War II (compounds of boron and hydrogen). As a result of this effort, the first generic method for manufacturing asymmetric pure enantiomers was developed.
He moved to Wayne University in Detroit as an assistant professor after working for four years in Chicago. In 1946, he was appointed to associate professor.

He became a professor of inorganic chemistry at Purdue University in 1947. He remained there for the rest of his academic career, eventually becoming a Professor Emeritus in 1978. He was also a member of the International Academy of Science as an honorary member.

Brown was known for his work with organoboranes, also known as organoboron compounds, which are boron-carbon chemical compounds that are organic derivatives of BH3. He is credited with discovering the notion of hydroboration, which is the fast reaction of boranes with alkenes.

Herbert C. Brown and Georg Wittig shared the Nobel Prize in Chemistry in 1979 “for their invention of boron- and phosphorus-containing compounds, respectively, as key reagents in organic synthesis.”
Other significant prizes he received include the Priestley Medal (1981), Perkin Medal (1982), AIC Gold Medal (1985), and the NAS Award in Chemical Sciences (1987).

While they were both students, he met and fell in love with Sarah Baylen. The couple married in 1937 and had only one child together. Until Brown’s death, they were a happy couple.
Herbert C. Brown died on December 19, 2004, at the age of 92, after suffering a heart attack.

Herbert is one of the wealthiest chemists and one of the most well-known chemists. Herbert C. Brown’s net worth is estimated to be $1.5 million, according to Wikipedia, Forbes, and Business Insider.